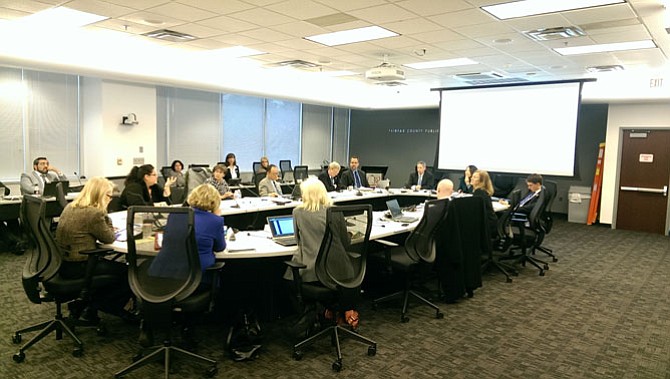 Members of the Fairfax County School Board meet at the school system headquarters where superintendent Karen Garza presented a report from the FY 2017 Budget Task Force. Photo by Tim Peterson.

Fairfax County Public Schools Superintendent Karen Garza is attempting to scale a towering projected budget shortfall for Fiscal Year 2017. On Nov. 9, she presented School Board members the report of budget cuts recommended by a 36-member task force she summoned earlier this year.

A dozen of the task force members were appointed by the School Board, the rest are representatives from civic associations, teachers associations and other county staff.

Garza instructed the team to make recommendations specifically for the 2017 budget with six criteria in mind: the number of students impacted, effect on employees and students, disruption to the system, permanent cuts instead of “one-time” cuts, magnitude of the cut and student outcomes especially on the core instruction.

“No one — including the Task Force members — wants to enact significant budget reductions that will impact classroom and student programs,” Garza said in a statement. “Their involvement in the process guarantees that a wide variety of voices and suggestions were heard and seriously considered.”

THE REPORT from the task force includes dozens of ideas for cuts and how those were supported by task force members, as well as employees, students and the community, based on input from the “UserVoice” program, outreach meetings, budget meetings with School Board members and the online Budget Proposal Tool.

The sets of cuts are divided into two groups — one set that would cut $50 million from the projected budget and one that would cut $75 million — and cover a wide area: Some examples are increasing facility use fees and student parking fees, increasing class sizes, eliminating foreign language immersion programs and eliminating Level IV Advanced Academic Program centers in favor of offering that advanced curriculum at each local school to reduce student transportation costs.

Garza admitted though the recommendations are just that, and far from final decisions, inevitable cuts would negatively impact essentially everyone involved with Fairfax County Public Schools.

“Reductions will be unavoidable unless we receive sufficient revenue to meet our expenditure requirements,” Garza said in her statement. “As I’ve said all along, we cannot cut our way to excellence.”

A representative from the chamber said Carlin would not be available to comment personally.

Becerra, who currently serves on the Board of Supervisors and School Board joint Successful Children and Youth Policy team, said he wished the task force had conducted its meetings publicly rather than in private, and that they had been provided with more comprehensive program evaluation information on which to base their decisions.

According to the task force report, “Due to time constraints, the Budget Task Force was unable to review programmatic evaluations for every potential item and option.”

“How good that program is to a child, it’s not up to me, it’s up to the system to quantify it,” Becerra said. “Right now, I don’t have that information in front of me. If you’re going to cut your own family budget like this, I think there’d be a divorce in my family real quick.”

Springfield District Supervisor Pat Herrity sent out a statement on the day of Garza’s presentation, also critical the task force failed to review the school’s supplemental retirement system, outsourcing or the “functions of the many ‘teachers’ that do not spend time in the classroom.”

“The School Budget Task Force missed the mark,” Herrity said in the statement.

The task force report did explain that employee compensation, health insurance and retirement are among items being reviewed and studied, so they weren’t included in the online budget tool.

Kimberly Adams, president and task force representative for the Fairfax Education Association, did vote, and said her organization is “not supportive of the majority of the recommendations as they stand now.”

Adams said the whole task force objective being focused on what to cut rather than where else to make up revenue was “hard to hear” from the perspective of educators.

“But you have to cut $50 million out of the system, they have to find it somewhere,” Adams said. “We have to pick the best bad choices out of that list. Nothing very palatable. Raising fees for students is not something I want to see happen, but is it a less impactful way to cut money out of the budget?”

Matt Haley, who was appointed to the task force by School Board member Jane Strauss (Dranesville) and chosen to chair the group by Garza, said the meetings were kept private to encourage more open discussion by task force members.

“We felt it was important for them to be able to share how they felt and what was feasible, possible, without being questioned on every statement by their constituents,” said Haley, a retired strategy consultant with Accenture.

Haley said that no program evaluation information in existence was withheld from the task force. “There was no less data available to us than is available to the School Board or Board of Supervisors,” he said. “We looked at everything that’s been studied. We had hundreds of questions fed through a staff answered for us. We have a lot more detailed information than just about any group has had in the past, though it is possible more analysis could be done.”

Adams agreed she would like to see more evaluative data in the future. “We had to assume every program is doing what it’s supposed to do, meeting their goals,” she said.

Garza will make her formal budget presentation to the School Board in January 2016. The School Board is scheduled to make their final decision on the proposed budget and vote at the May 26, 2016 meeting.

FOR GARZA’S PRESENTATION and the full report from the task force, visit the Fairfax County Public Schools online document-sharing program at www.boarddocs.com/vsba/fairfax/Board.nsf/goto?open&id=A3KSVY653B27.