Above a Cut
Votes

The FY 2017 proposed FCPS budget calls for a 6.7 percent increase in the county budget transfer.

For Fiscal Year 2015, Fairfax County Public Schools Superintendent Dr. Karen Garza oversaw $96.5 million in cuts made from the school system’s annual operating budget. For FY 2016, it was $55.4 million, she said.

Before a library full of news cameras, elected officials, students, teachers and principals at West Potomac High School, Garza presented her proposed FY 2017 budget for the first time on Jan. 7, 2016.

“The most important announcement for our students and teachers may be what the proposed budget does not do,” she said, “it makes no further cuts.”

The $2.67 billion budget includes $62.2 million for raising all employees’ salaries, as well as another $40 million specifically for teacher salaries.

Garza said the salary raises are the “first steps” in a multi-year plan to make Fairfax County more competitive in attracting and maintaining teachers. At the beginning of this school year, she said, there were 200 open positions in the school system. “This must not continue.”

Garza cited the nearly half a billion dollars having to be cut from FCPS budgets going back to 2008, as well as a trend of underfunding from state and local government from the last nine years.

Another focus of the budget is decreasing class sizes, for which the superintendent proposed a $10.8 million increase for hiring 165 new employees. The additional personnel would lower all elementary classes to fewer than 30 students, according to a release from Fairfax County Public Schools. 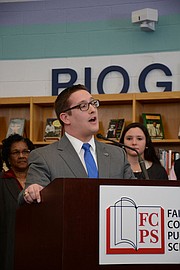 “This budget reflects only our very basic and most pressing needs,” Garza said, “and, as a community, we must commit to investing in our teachers and students once again.”

Garza’s new budget tops FY 2016 by $121.4 million, or 4.8 percent, and expecting little increase in funding from the Commonwealth of Virginia (roughly 15 percent of the school’s budget), would require a 6.7 percent increase in the transfer from Fairfax County (the majority source of funding) to fully execute.

Scott said she and her colleagues commit fully to teaching “not for multi-digit salaries but the call we feel to complete this work with excellence.”

“As we give our best,” Scott continued, “we ask our community now give its best. Please rally around us and for us so we can continue the work we love, and an education families can be proud they’ve chosen for their children.”

Marshall High School senior Samee Ahmad thanked specific Fairfax County teachers who helped him develop a lifelong love of reading and learning. “Schools are the underlying foundation in community-building,” he said. “I’m excited to hear Dr. Garza’s forward-looking budget in the interests of both students and teachers.”

Annandale High School Parent Teacher Student Association president Robin Hylton said the challenge in making sure the proposed budget is fully funded is “not one for just Dr. Garza.”

She urged parents, community members and businesses to take a more active role in finding funding solutions. “We as a community must choose to support,” she said.

Pat Hynes, School Board chairman, was the final speaker at the Jan. 7 morning event. “After nine long years” of underfunding, she said, “we need some good news.”

Hynes said the school system is already spending $1,000 less per pupil now than in 2009. “Quality education is not a luxury, it’s an absolute necessity,” she said. “What should we cut? Those are not questions that should come before the school system.”

Among other aspects, West Potomac High School principal Alex Case said he was pleased to see in the fine print of the proposed budget a moderate increase in salaries for support employees such as custodial staff and food service workers that were below federal living wage standards.

“Obviously this is something the school system, Board of Supervisors and delegation to Richmond need to work collectively on,” Case added, “to fully fund and protect this wonderful asset we call Fairfax County Public Schools.”

Matt Haley was chairman of Garza’s budget task force that convened to review community feedback and analyze all operating costs. “We dug into this for a long time,” he said after the event. “It all came back to levels of service.”

In advertising what potential cuts — from fourth grade strings to language immersion programs to varsity sports — might look like, the task force drew some public outrage.

“I believe our community finds any of the potential cuts untenable,” Garza said. “We cannot continue to balance budgets by cutting services, raising class sizes and freezing salaries, or by providing only nominal pay raises.”

Included in the salary raise is a step increase and one percent market scale adjustment for all employees.

Fairfax Education Association President Kimberly Adams said teachers “will feel more valued in this budget than we have in a long time.”

“They need to realize how important the school system is to job security, the local economy.”

Garza formally presented her budget to the School Board at their business meeting in the evening on Jan. 7. Public hearings are scheduled for Monday Jan. 25 and the budget will be presented to the Board of Supervisors on April 5. The School Board should adopt the approved budget in May.

More information on the budget, including a video of the press conference and Garza’s presentation, can be found online at www.fcps.edu/news/fy2017.shtml.