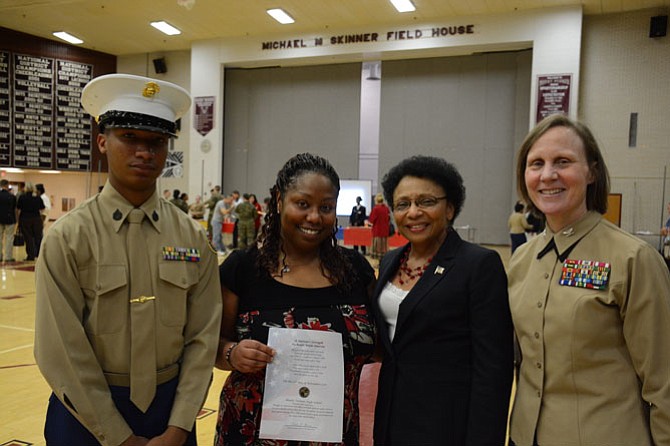 Mount Vernon High School senior Elisa Solomon is a Cadet Captain in the U.S. Marine Corps Junior Reserve Officer Training Corps at her school. She’s also a poet. The young officer stood at the podium in the center of the school’s Michael M. Skinner Field House on Veterans Day, Nov. 11 and read her original work “The Superheroes.”

“Veterans and superheroes are one in the same, and that makes you our superheroes every day,” she said.

With the birthday of the U.S. Marine Corps on Nov. 10, it was fitting to have a joint celebration with Veterans Day organized by her military organization.

“We let them work it,” said Senior Marine Instructor Col. Caroline Simkins-Mullins (U.S. Marine Corps ret.). “The students planned, practiced and conducted it. It was our mission to keep it safe and professional.”

With roughly 160 members in the U.S. Marine Corps Junior Reserve Officer Training Corps, Simkins-Mullins said Mount Vernon’s is one of the larger groups for that branch in the area.

At the beginning of the program, a color guard marched in with the flags and then the student members demonstrated several disciplined formations.

“You couldn’t ask for more,” said Simkins-Mullins. “You see the pride and professionalism in doing this, carrying it out.”

Michael Skinner, the namesake of the field house, also took the podium to share a few memories from serving in World War II. Skinner was a history teacher, basketball coach and sub school principal at Mount Vernon High School between 1955 and 1983, and remains an iconic figure at graudations and sporting events.

Skinner remembered travelling with his servicemen past Fort Belvoir and seeing the high school. “I never thought I’d find myself here,” he said. “That was 1955, and I’m still here.”

Carla Moss, Mount Vernon class of 1989, was in the audience for the program. Moss served in the U.S. Army from 1993 to 2001, lives in the Mount Vernon area and works at Joint Base Myer-Henderson Hall in Arlington. She comes back to the school each Veterans Day.

“I feel ecstatic and nostalgic,” Moss said, “to see the students evolve over the years and continue to honor our veterans.”