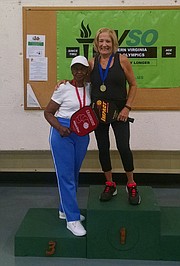 Alease Brooks (left) and Betty de la Cruz, both of Arlington, take the gold medals in 80-plus pickleball singles.

Pickleball singles at the Thomas Jefferson Recreation Center in Arlington was one of the final events concluding the two-week Northern Virginia Senior Olympics on Sept. 25.

Volunteer Irene McDonnell explained the appeal of pickleball: “Tennis players love to switch to pickleball when they’ve had a few joints replaced.”

Judy Aw started that way: “I was a tennis player, but after I had rotator cuff surgery I wasn’t able to serve overhead. My neighbor plays pickleball, so that’s how I started.” Aw took first prize in the over 60 age group, and talked with her opponent, Charlotte Hicks, at length after their match, trading information on their favorite places to play. Pickleball combines the challenge and athleticism of tennis in a badminton-sized court with wooden paddles similar to table tennis. The ball used is akin to a wiffle ball. Depending on the players, it can look like leisurely volley, or a heated court battle.

Alease Brooks and Betty de la Cruz, both of Arlington, faced off for the 80 and up singles competition, but earlier in the week they took the gold for doubles together. Brooks loves pickleball, walking, and anything else that gets her out and moving around. On exercising into her golden years Brooks said, “It’s done wonders for me — it keeps my mind clear, gets me doing things for other people. I don’t take any medication but an aspirin. Exercise is the key to everything. Do it while you can, that’s what I say.”

USA Pickleball Association Mid-Atlantic Ambassador Helen White can’t say enough about the game. A court sport enthusiast who splits her time between facilitating pickleball and basketball for all ages and especially the 50 and up set, White is passionate about finding ways for mature adults to play — from piloting a seated pickleball league for patients at Walter Reed to lobbying to get underutilized outdoor courts lined for pickleball use. She’s always advocating that senior citizens and pickleball are a great match.

“It’s a great way to stay active, have fun, get some fitness, and make friends,” White said, pointing out that it’s a relatively low cost sport to get involved with, with paddles costing $15 and up, depending on the seriousness of one’s level of play. Senior centers and community centers across Northern Virginia include accessible options for people to participate in pickleball and other activities.

Get in touch with the Northern Virginia Senior Olympics Committee through its website at www.nvso.us to find out how to participate in or contribute to next year’s event.