Never Too Old To Compete
Votes

Never Too Old To Compete

Herb Levitan adjusts his goggles, pulls on his swimming cap and lowers himself into the pool. Levitan had been up at 7 a.m. to run three miles and had biked from home to the Ocean Dunes Water Park as he trains for the Northern Virginia Senior Olympics. 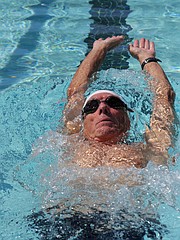 Herb Levitan trains for the Northern Virginia Senior Olympics at Ocean Dunes Waterpark on Wilson Boulevard, Arlington. He is entered in seven swimming events as well as a number of other events including pickleball, rowing and some track events.

Levitan has participated in the Olympics for the last 9-10 years and is entered in about 30 events this year. He says swimming is his favorite: "I train all year long with swimming a couple of times a week, weights, running the track at Thomas Jefferson, and I ride my bike everywhere. I think cross training is important and I avoid injury by not just concentrating on one sport."

While preparing for the Senior Olympics, Levitan is also training for a triathlon in September. "It's a mile swim, 25-mile cycle and 6-mile run. The first time was pretty tough." Levitan says he had never competed in sports before but the people who organize and participate in the Senior Olympics are nice, and there is camaraderie among the competitors. Over the years Levitan has won so many medals that he doesn't even collect them anymore.

The Northern Virginia Senior Olympics is scheduled to be held Sept. 10-21. These local Olympics for adults age 50 and over began in 1982, and nearly 800 seniors participated last year. According to the chair of this year's event, Jim Mackenzie, they hope to exceed that number this year. Mackenzie said he competed for a number of years and then volunteered last year for the swimming events. "This year I found myself chairman," he said.

Opening events begin Saturday, Sept. 10 at 8 a.m. with track followed by rowing and diving and they conclude on Sept. 21 with pickleball singles and a spelling bee. More than 50 events will take place at 25 different venues including senior and recreation centers, parks, pools and golf courses around the area. Registration is $12 for as many non-conflicting events as a participant is willing or able to schedule with extra fees for golf, bowling and orienteering.

Participants must live in one of the sponsoring jurisdictions including the cities of Alexandria, Fairfax and Falls Church and the counties of Arlington, Fairfax, Loudoun, Fauquier, and Prince William. Register online at www.nvso.us or postmark by mail by Aug. 27.

"Things are getting a little hectic," according to Mackenzie. "We like to encourage people to sign up online, but seniors sometimes find it difficult and we have to walk them through it."

Last year they had 37 people competing in the 90-99 year-old range. "We had a 100-year-old chosen to carry the torch this year but unfortunately he passed before the games," he said.

Mackenzie said a lot of people take the games seriously and some practice year round. For instance, last year 85-year-old Helen Moot not only won the 80-89 year old Wii bowling competition but the next closest person was 150 points behind, “and she beat all of the men."

Mackenzie said, “Senior or not, they want to win." He adds there is a podium for presentation of the medals for the track and swimming events, and the medal winners are all beaming with their families taking pictures.