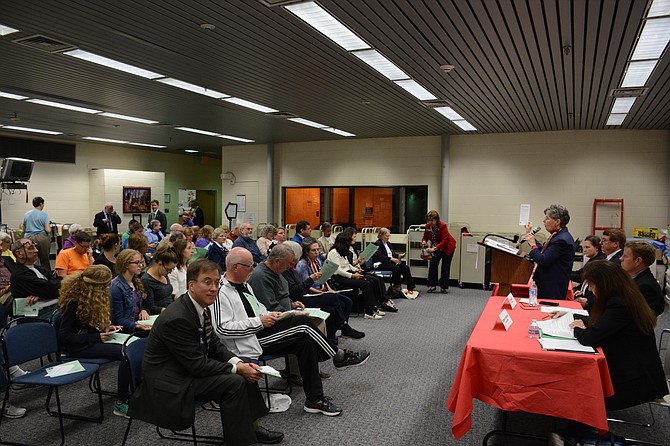 Community members filled the meeting space at the John Marshall Library in Franconia to meet candidates running to represent Lee District at the Board of Supervisors, Fairfax County School Board and Virginia State House of Delegates. Photo by Tim Peterson.

They may not be old enough to vote, but twin sisters Madelyn and Miranda Khoury paid as much attention to the presentations as anyone in the audience at an Oct. 5 Meet the Candidates event hosted by the League of Women Voters of Fairfax.

The eighth graders at Mark Twain Middle School are part of the school’s “news crew” and wanted to report back to their student body after meeting the people running for Lee District supervisor, Fairfax County School Board representative and Virginia State delegate.

“It’s a good opportunity to get to know how things work in local politics,” said Miranda. “We want to educate students, and maybe they’ll be more likely to vote when they’re older.”

And though they can’t vote yet, they still have concerns about school, especially the projected deficit looming in the 2016-2017 school year for Fairfax County. “That does affect me,” Miranda said.

“We want to know what issues we’re facing,” Madelyn said.

When addressing what is now being advertised as a projected $70 million budget deficit for the 2016-2017 school year, incumbent School Board representative from Lee District Tammy Derenak Kaufax reminded the audience a chronic source of financial challenge to the school system is its growth.

She said in the last eight years, the student population has risen by 23,000 while state and county funding hasn’t kept up. Kaufax is running unopposed for re-election.

“We can’t raise the funds ourselves,” Kaufax said, going on to reference the possibilities of partnering with other local and state organizations. “How can you help us? I don’t want to have cuts anywhere that interfere with our students’ education.” 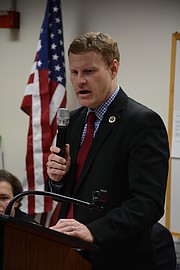 ANOTHER UNOPPOSED candidate is supervisor Jeff McKay (D-Lee). During his remarks, McKay said school class size in schools is a “major concern” of his, along with continued robust revitalization in the Springfield and Mount Vernon areas of Lee District.

McKay also said that progress needs to be made in how the county treats individuals with intellectual or physical disabilities. “We’re far behind the times,” he said. “Virginia’s record on mental health is an embarrassment. The place for offenders with mental disabilities is not in the jail to begin with.” 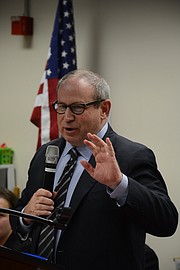 Sickles, Urman and McIlvaine all agreed that the current, politicized boundaries of senatorial districts is a problem. Sickles called redistricting “one of the root causes of issues in our country.”

“I would not have created my district the way it is now,” he added.

On gun control and treatment of individuals with mental disabilities or health problems, Urman asserted that “reducing gun violence and shootings starts with proper mental health education, upbringing and teaching respect for life and weapons.” She continued by saying she thought it was important for individuals to be able to protect themselves at all times.

Sickles responded to the effect that Urman was inferring everyone carry a gun, and referenced the most recent mass shooting in Oregon. “We don’t need to have college campuses become the Wild Wild West,” he said.

McIlvaine agreed in part with Urman, saying with regards to reducing gun violence “there needs to be equal emphasis on mental health. You’re not going to yield a solution addressing one without the other.” If elected, McIlvaine said he would go back and review Virginia’s gun laws for opportunities to improve.

At the conclusion of the evening meeting, pushing it for a school night, the Khoury sisters said they were still interested in finding out more about the candidates and planned to research their individual websites.

“We like learning how this all fits together,” they said, “figuring out who to go to when you have a problem.”

FOR MORE INFORMATION about future candidates events from the League of Women Voters of Fairfax, or to view video of previous events provided through Fairfax Public Access Inside Scoop, visit www.lwv-fairfax.org/2015MeetandGreet.html.