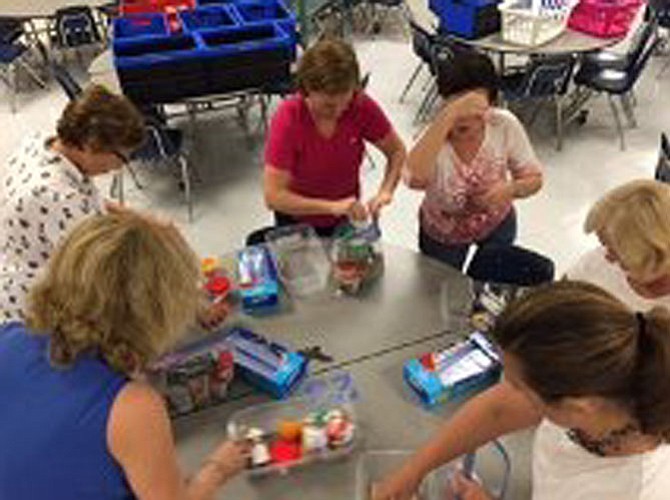 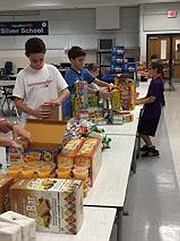 Dina Koch and Sara Boehm of the Mount Vernon area of Alexandria want to teach her children when they see a problem, they should step in, reach out and fix it.

“There are times when we feel like it’s a lot of effort, just doing a little piece of it,” Koch said, “but that’s how things get changed.”

Koch and Boehm organize Food 4 Thought at Woodley Hills Elementary School, a program in partnership with Our Daily Bread and Fairfax County Public Schools to address some of the food needs of students who don’t receive the same free and reduced meals over the weekend that they do during the week at school.

At Woodley Hills, more than 72 percent of the student population qualified for free or reduced meals in the 2014-2015 school year according to the Fairfax County Public Schools profile, up from 69 percent the previous school year.

“Our four children are going to school with people who are hungry, who need food,” said Koch. “We never knew it was a problem. To be able to do something about it, with my kids seeing that, feels great.”

In January, 2015, Koch and Boehm, an assistant librarian at Woodley Hills, noticed there was a real need for more long-term support for students at the school whose families are struggling, out of work, or qualify as homeless. They began looking for organizations to sponsor food packing events and soliciting support from their own community. 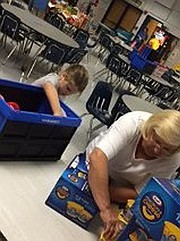 The name “Food 4 Thought” came to the women as a possible moniker for starting a non-profit to formalize this work. When they looked to see if it was taken, they discovered a program by the same name run by Our Daily Bread, an emergency food and financial assistance provider in Fairfax. Thier Food4Thought was already working with several Fairfax County elementary schools to achieve the same goals Koch and Boehm had.

Chris Garris, the Food Bridge program manager for Our Daily Bread, explained their program began when a social worker from Marshall Road Elementary School came to them six years ago. She told them about “teachers with children on Mondays that were hungry, lethargic, not ready to be school,” said Garris. “She just felt pretty desperate.

“We decided as an organization, our part would be helping them understand how to coordinate their PTA, getting approval from the principal, social worker and school counselor,” Garris continued, “we would support them, having them be self-sufficient within their school.”

Our Daily bread partnered with human services charity Food For Others and obtained a grant from Fairfax County to go into half a dozen elementary schools and work with social workers to identify students in need.

“Woodley Hills was a little concerned because of the amount of their need,” Garris said. “We always tell them, start small, see what you can handle. They’ve been surprised, how you put it out there that there are hungry students coming to your school, people really want to help, you just have to tell them how.”

Koch and Boehm are well on the way to a $12,000 fundraising goal, which Koch said is the estimated cost for providing 50 packs of food for every week throughout the school year. Most of it has come from friends and neighbors in their 150-home neighborhood, including relatives donating from across the country.

“It’s really been far-reaching,” said Garris, “it was very very smart of them to use their community.”

The program accepts donations in the form of cash and food purchased from an Amazon wishlist. Koch said the packs usually contain enough food for a pair of breakfasts, lunches and snacks to last the weekend.

“It is very powerful to be able to place these food packs right into the hands of the child who needs them,” Boehm said in an email. “We are able to eliminate the need for parents to do anything — they don't have to do paperwork, they don't have to drive somewhere or take time off of work. The kids bring the food home themselves, they are helping their families.”

“It’s such a tangible thing,” said Koch. “You can see how everything you do goes right into someone’s hand who needs it. We want kids to grow up and understand sometimes people need help, to see that firsthand, this is something they can really understand.”

For more information on the Woodley Hills Food 4 Thought effort, visit www.woodleyhillsfood4thought.org. The Our Daily Bread website is www.odbfairfax.org/Food-for-Thought.