Fairfax County: League of Women Voters hosts Forum for Board of Supervisors Chairman and At-Large School Board
Votes

Fairfax County: League of Women Voters hosts Forum for Board of Supervisors Chairman and At-Large School Board 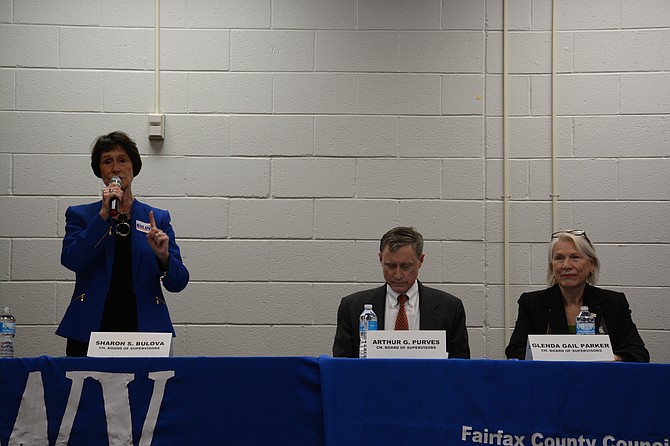 The League of Women Voters of the Fairfax area hosted a forum for citizens to meet the candidates for Fairfax County Board of Supervisors chairman and school board at-large members at James Madison High School on Oct. 13.

Continuing their series of meet the candidates events, the League of Women Voters of the Fairfax area gave citizens another opportunity at James Madison High School in Vienna to ask questions and visit with hopefuls for both Board of Supervisors chairman and Fairfax County School Board at-large member.

Incumbent Democrat Sharon Bulova, who has served in that role since 2009 and prior to that as Braddock District supervisor, sat first alongside her challengers: Republican and president of the Fairfax County Taxpayers Alliance Arthur Purves, and Gail “For Rail” Parker, a retired reservist U.S. Air Force officer and representative of the Independent Green party.

Ameliorating the projected shortfall for Fairfax County Public Schools in 2016, now estimated to be less than $100 million, was posed to the candidates early in the discussion.

“I propose working in a synergistic way with the School Board to address the issues they’re having,” Parker said. “Infrastructure budget is where the problems are.” Parker proposed employing more energy-saving measures — incorporating solar and wind power, to make money for the school system.

Bulova clarified that the Board of Supervisors, while it provides the budget for the school board, does not have “line-item authority” to direct how it should be spent. She did offer, however, that the supervisors in their lines of business review would invite the school board to work with them and “see which items are pertinent to join us on.”

Purves said that he is “concerned the School Board has made no progress in fixing the minority achievement gap.”

When questioned about the possibility of a tax on dining out in the county, Parker said she would rather work to increase revenue by growing the economy through new jobs created by “joining the solar age.” Bulova commented on it as a viable solution that nearby jurisdictions have executed with some success. Purves, disagreed, that the revenue gain would not be significant enough and a meals initiative would be “just another tax increase that solves nothing.”

The candidates were also asked to weigh in on whether and how the Fairfax County Police Department should be reformed. Parker said, “That situation cannot be tolerated, appropriate action needs to be taken.”

Bulova reminded citizens that Fairfax County is “the safest jurisdiction of our size in the United States,” and referenced the conclusion of the Ad Hoc Police Practices Review Commission. She said Chief of Police Edwin Roessler has already begun to implement some of the commission’s recommendations for training and responding to critical incidents, and that she’s “considering independent citizen oversight.”

Purves asked, “Do we have civilian control of the police department in the county or does the police department have control of civilians?” He criticized the county’s transparency with regards to the shooting death of Springfield man John Geer. “I do hope our chairman answers why we had a 17-month delay on the Geer information, before the election.”

AFTER A BRIEF INTERMISSION, eight candidates for the Fairfax County School Board at-large member position took center stage. Voters will choose three to sit on the board.

Class size was an early topic of discussion: Each candidate agreed lowering class sizes is important, followed by a question as to the effect of the School Board’s decision in May to add gender identity to the school system’s non-discrimination policy on the school communities.

The meeting when the School Board voted on that change was filled with demonstrators, both for and against, who became loud and aggressive, and prompted then-chairman Tammy Derenak Kaufax to threaten to have the room cleared.

Some expressed frustration that the board had acted too hastily in making its decision, and that members had already made up their minds prior to the meeting. Others were concerned about how transgender students and faculty would use bathrooms for the opposite sex to which they identify.

Incumbent at-large school board member Ryan McElveen went first, saying, “We have to support all of our students.” He repeated his explanation from that May night that the change in wording did “not affect our policies; this vote just codified what we already do.”

Second incumbent Ilryong Moon echoed McElveen and added they were “trying to reinforce to the school community and public at large we do care about these students and employees.”

Burnette Scarboro, a challenger and director of the Northern Virginia District Parent Teacher Association, also agreed the schools “should not discriminate against anyone whatsoever.” But, she said she was “concerned about voices not being included.”

Ted Velkoff, the third incumbent, recalled the May meeting and said, “look at the video and see who was being respected.”

Challenger Bob Copeland, a dentist with a solo practice in Arlington, also called out the board for a lack of sensitivity to parents. “In the name of ending discrimination, they discriminated,” he said.

Jeanette Hough, a mother of three children in Fairfax County said, “The process was flawed from the start, the conversation was dishonest.”

Manar Jean-Jacques, an analyst for the U.S. Department of State Refugee Processing Center added the final comment, that the school system needs to “get back to character education for our kids.”

“Leave controversial topics to parents to keep with their kids at home,” she said.

Video from the League of Women Voters of the Fairfax Area is being posted on their website via Fairfax Public Access Inside Scoop at www.lwv-fairfax.org/2015MeetandGreet.html.