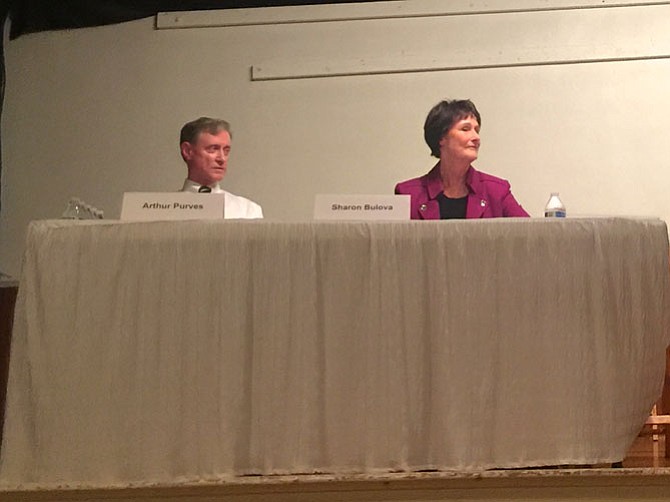 Sharon Bulova (D) and Arthur Purves (R) listen to Ralph Appleton’s question at a debate at the Great Falls Citizens Association. The chairman of the Board of Supervisors is the only position on the board elected at-large. Photo by Ken Moore.

Second Round of Debates

The Great Falls Citizens Association will hold a second round of debates with candidates for public office in Fairfax County on Monday, Oct. 19 at 6:30 p.m. at the Grange, 9818 Georgetown Pike.

Participating in this debate:

Sharon Bulova is exactly where she wants to be.

“I believe in local government. It’s where the rubber hits the road, and where you’re closest to your constituents,” said Bulova, Chairman of the Board of Supervisors, the top elected official in Fairfax County.

“We are investing in the services and the programs that people in Fairfax County appreciate, rely upon and live here for.”

“My priorities, the number one priority, is to strike a balance between keeping taxes affordable to our residents while also making sure that we are investing in the services and the programs that people in Fairfax County appreciate, rely upon and live here for.”

Bulova, formerly the Braddock District Supervisor, took the helm of the county’s board in a special election in 2009 after U.S. Rep. Gerry Connolly was elected to Congress in 2008.

“You have to understand that the economic situation in this county is not good,” said Purves. “I already mentioned that we had close to the smallest job growth of any large county in the United States in the past year.

“The economic situation in this county is not good.”

-- Arthur Purves (R), challenger for Chairman Board of Supervisors

“We lost 14,000 jobs due to sequestration, we lost a lot of middle-income jobs after the housing bubble burst, the number of food stamps applications has doubled since 2008 and staffing for parks and libraries was cut by 100 staff members since 2008,” he said.

That was the beginning of the difference between the two candidates’ views about taxes at the Great Falls Citizens Association Candidates Debate held at The Great Falls Grange on Sept. 29.

Bulova said she works to “ensure that we continue to have an excellent school system and balancing that with public safety, human services, and great libraries,” said Bulova. “Also parks, fire and rescue, all the services including public works making sure that we can have clean air, clean water. Those are priorities of local government.”

“LET ME POINT out that Virginia is one of seven states that still has the BPOL tax, the tax where business has to pay a tax even if it loses money,” said Purves. “Virginia used to be first, number one, in terms of being business friendly, in the nation and now we’re number four.”

“In Tysons Corner, all those new commercial office buildings going up, they aren’t attracting new businesses, they are just drawing businesses away from other office buildings in the county. So we need to attract businesses and the way to do that is to be more competitive than our neighboring jurisdictions.”

Bulova conceded that “these have not been easy times.”

“I was elected chairman just exactly as the great recession happened,” she said.

“I am a pro-business Democrat and one of my priorities is to stimulate our economy,” she said. “Diversifying our industry sector is something that our Board has been focusing on.”

She pointed at the growing hospitality business with Cvent, an event planning company that moved its headquarters to Fairfax County, and the World Police and Fire Games held this year, an economic and cultural success.

The county needs to ensure that “we are not so reliant on the federal government and defense related programs and that we are diversifying our economy into different industry sectors such as medical research and translational medicine,” Bulova said.

Revitalizing the older commercial and industrial sections of the county, including Tysons and Merrifield have been another priority, said Bulova.

He said Gov. Terry McAuliffe wants to toll I-66 inside the beltway for an extended period of time and then have HOT (High Occupancy Travel) lanes.

“These are tax hike lanes. That’s a better name than HOT lanes,” said Purves. “We really ought to understand why there is no money for transportation and infrastructure and it’s not an easy thing to solve. At the federal level, all money is being taken up by Social Security, Medicare and Medicaid. We need to fix our entitlement programs if we are to ever fix our transportation problem,” he said.

Bulova is proud that she cut the opening ribbon for the Silver Line.

“There’s something I agree with Mr. Purves on and that is there was a time when the federal government was the level of government that paid for large transportation projects,” she said.

“Regarding tolls, we’ve had, at least from my point of view, a relative positive experience with managed lanes, HOT lanes on the Beltway,” Bulova said.

Bulova said one approach to transportation problems could include creating a network of choices, including carpool lanes and toll lanes. “So this may be a viable transportation project but there are things we care about and want to see dealt with, especially the impacts of the toll lanes on the surrounding communities. Once you get inside the Beltway on I-66 you can’t get on it during peak hours, and this project would allow everybody to use it during peak hours.”

CONTROVERSY around the Fairfax County Police Department caused scrutiny and criticism of the Board, especially since the shooting of John Geer.

“My boss has a great saying. The saying is, ‘Bad news does not improve with age,’” said Purves.

“John Geer was a civilian and he was unarmed and he was shot by a Fairfax County policeman, and for 17 months the [Board of Supervisors] stood silent while the police department refused to give the details of that shooting to the Commonwealth’s Attorney who is responsible for conducting that investigation,” Purves said. “And the trust between the community and the police is a fragile thing and it's a very important thing and this 17- month delay, I think, endangered that trust.”

Bulova said the Geer case could offer a case study in “everything that could go wrong as far as transparency, sharing what happened with the public and providIng the information that was requested and making sure that justice was timely served. And things did not go well in that case,” she said.

Bulova created the Ad Hoc Police Practices Commission, which will report its recommendations to the Board of Supervisors on Oct. 20.

“You’ll see all the work we’re doing,” she said.

Purves brought up the in-custody death of Natasha McKenna, a woman with mental illness who died in the Fairfax County Adult Detention Center, after deputies used a taser on her four times while struggling to restrain her.

“It was a death that probably could have been avoided if the county had mental health court diversion program which it considered doing in 2004 and then abandoned,” said Purves. “Jails are the largest provider of care for mentally ill persons in the country.”

The county is working towards a “diversion first” program that could address some of those concerns. http://www.fairfaxcounty.gov/diversionfirst/