First-hand Lesson on Holocaust in Fairfax

Taking the stage for a group photo with the honored guests Holocaust Survivors up front and the Students Ambassadors and members of Mason Hillel in the back at the third Expressions of the Holocaust: Memories event at George Mason University. Photo by Andrea Worker. 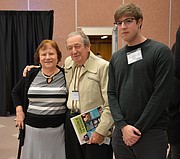 “On the seventy-seventh anniversary of when supposedly civilized nations lost their collective minds, we are here to learn the lesson – first hand - of what can happen when people just stand by and do nothing.” That was how George Mason University President Dr. Angel Cabrera described the Expressions of the Holocaust event, organized by Mason Hillel, the school’s Jewish life organization, at which he was a guest speaker on Sunday, Oct. 25.

As he greeted the assembly of thirty Holocaust survivors, families, friends, Hillel members, students and community guests, Cabrera was referring to the upcoming anniversary of Kristallnacht (The Night of Broken Glass), the night in 1938 when mob violence (later aided by Nazi Storm Troopers, members of the SS and Hitler Youth) broke out across Germany, Austria and other Nazi controlled areas. By morning, untold numbers of Jews were beaten or murdered. Jewish homes and businesses were looted or destroyed. Hundreds of synagogues were vandalized or burnt to the ground, and some 30,000 Jewish men were arrested to be later sent to concentration camps. Many historians view Kristallnacht as the public ignition point of the Nazis’ determination to rid the Jewish presence from anywhere within their sphere of control and influence.

Groups like Mason Hillel are determined that the lessons of the past are not lost. “This is our third program dedicated to Holocaust education and remembrance,” said Taylor Kreinces, chair of the event. “We will hear memories of our honored guests to better understand their lessons of the Holocaust…to share their experiences and wisdom for future generations.” Kreinces asked participants to take a memory from the event and share it, hoping that they, too, will share. “It’s the only way to ‘never forget.’”

AFTER THE KOSHER LUNCH plates were cleared away, student ambassadors started the conversations at each of the round tables with group introductions. Then the survivors began to tell their stories.

Anna Grosz, born Anna Seelfreund on April 20, 1926 in Racsa, Romania, was the daughter of Samuel, a vineyard owner and wine merchant, and Ilona, who cared for Anna and her five sisters. When Anna was 14, her town of Racsa suddenly became part of Hungary, separated from Romania by arbitration between the Axis partners Germany and Italy. The vineyard and the business were confiscated under Hungary’s anti-Semitic laws and Samuel was conscripted into the Hungarian Labor Service. The family received a few letters from Samuel at first, then nothing. Samuel Seelfreund never returned home and was never heard from again.

Anna, her mother and her sisters were eventually forced into the Satu-Mare ghetto. From there they were moved to the concentration camp at Auschwitz. Anna and her sisters Gisella, Clara and Elizabeth were selected for forced labor after their hair was cut and they were disinfected. Her mother and sisters Margaret and Violet did not survive their first night at Auschwitz. They were sent to the gas chambers almost immediately.

Anna survived life in Auschwitz, then Stutthoff, and then the Praust subcamp. In 1945 the sisters were separated when the SS evacuated most of the prisoners at Praust, leaving Anna behind since she was “unfit” after breaking her leg. Sister Elizabeth was shot and killed during that evacuation march, but Anna was reunited with Gisella and Clara after Soviet troops liberated the prisoners at Praust.

At another table, Felix Nicinski described his internment at Dora when he was just twelve years old. The camp was mostly underground, safe from Allied air raids, and the prisoners tasked with digging tunnels into the surrounding mountains for subterranean weapons and missile production. “There were 12,000 people held in those tunnels,” recalled Nicinski. “For six months we did not see the light of day. Can you imagine that?” But the worst part for this survivor was having everything taken from him upon his arrival. “They took everything we had. They took the pictures I had of my family. I lost them all and that hurts, that I have no pictures of them.”

Maria Dworzecka was another Holocaust survivor at the same table. She made light of her experiences, saying she didn’t have it as bad as others like Felix. After hearing how she never knew her father or found out what happened to him when her parents were unable to flee Warsaw, or how she was left in the streets at less than three years old when her mother was suddenly taken away to a camp, her table companions couldn’t bring themselves to agree with her. Three years later Maria’s mother was able to return home, looking for her daughter, but it took months before Maria could re-bond with her mother and they could become a family again. Sadly, only 3 years after their reunion, Maria’s mother was killed in a car accident, and Maria was again adopted by a Jewish family.

“But good can come from bad, “ she reminded her listeners. Maria earned her PhD in Physics in 1969, and has been teaching at George Mason University since 1982, holding the post of Senior Associate Dean, College of Science from 2006 until 2011. She is also the adoptive mother of daughter Anna. “That just feels right,” she says.

AROUND THE ROOM the stories continued, like that of Michel Margosis, born in Belgium to Russian-Jewish parents who had fled there after Michel’s father escaped imprisonment in Siberia. Michel’s family left Belgium for southern France when he was 14 years old, four days after the Germans invaded Belgium. They escaped from a French internment camp, hid with friends for a year, then walked across the Pyrenees mountains into Spain, where they stayed until Michel was sent to the United States via Portugal, where after 3 years in foster care he was finally reunited with his family.

“How did you handle the shock of all that, moving, hiding, separated from your family and coming to the US all on your own?” asked one of Michel’s listeners. “I don’t know,” he answered. “I think after a while nothing was shocking at that time, when you were in the middle of it.” Echoing GMU President Cabrera’s remarks, Michel responded that perhaps the most shocking thing of all was that this could all happen in “civilized countries.”

Prompted by the student ambassadors and interesting questions from their tablemates, the memories continued to flow, but eventually talk turned to how these terrible lessons of yesterday could be used to better circumstances and situations of today.

“As painful as it might be, take ‘Never Forget’ to heart,” said Grosz. “Share your stories, like we are doing today,” said Michel Margosis. “Listen. Learn. Take action,” said student ambassador Brian Garrett-Glaser. “Pass it along and don’t let the stories die with this generation,” said Leonie Vandersee, newly arrived from Berlin to work with the American Jewish Committee via the Action Reconciliation Service for Peace.

“And don’t forget,” said Dr. Maria Dworzecka, “the real evil is to just stand by and think this can’t happen, or I can’t do anything. Remember that Hitler was chosen in a democratic election. Everyone needs to stand up, not stand by.”