Herrity: Fairfax County Board Made Decisions Not to Disclose Geer Information
Votes

Herrity: Fairfax County Board Made Decisions Not to Disclose Geer Information 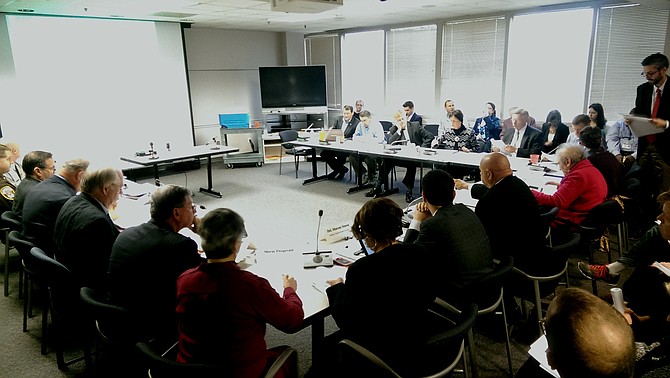 Members of the Board of Supervisors and representatives of the Ad Hoc Police Practices Review Commission met at the Oct. 27 public safety committee to begin reviewing the 142 final recommendations of the commission, including a civilian review board and independent auditor. Photo by Tim Peterson.

While Commonwealth’s Attorney Raymond Morrogh was held up as one source of stalling the release information regarding the 2013 shooting death of Springfield man John Geer by then-Fairfax County police officer Adam Torres, Supervisor Pat Herrity (R-Springfield) offered that “decisions we made” on the Board of Supervisors, on the counsel of the Fairfax County attorney, were also responsible for Torres’ name, discrepancies in the investigation and other details of the incident being withheld from the public and Geer’s family until a lawsuit finally forced the police department to release everything.

Herrity spoke up during a meeting of the board’s public safety committee on Oct. 27 to discuss the 142 final recommendations of the the Ad Hoc Police Practices Review Commission created in the spring by Board Chairman Sharon Bulova.

Bulova responded that it was county policy to not release the name of officers in an officer involved shooting until the Commonwealth’s Attorney decided whether or not to pursue criminal charges against the officer. In the case of Geer, “obviously that didn’t go well,” She said. “It just didn’t happen for a very, very long time in this case.”

Herrity came back that the Board of Supervisors made the decision to withhold both the name and details about Geer’s death.

Lack of any information about the case for more than 16 months fueled public frustration. The ad hoc commission report on communications referred to a cultural predisposition not to disclose information within the police department and Board of Supervisors.

Torres is now being held at the Adult Detention Center awaiting trial on second degree murder in Geer’s death.

During her report on communications subcommittee recommendations, Merni Fitzgerald highlighted the recommendations for “maximum disclosure, minimum delay” in terms of information sharing, the need for a civilian public information officer, establishing a written process for giving out information and providing more “open data” to the public.

Deputy county executive and former Police Chief David Rohrer explained at the Oct. 27 meeting how county staff and the police department were already digesting the report and organizing it into a “matrix” to sort, prioritize and track changes, costs and timelines.

“There have a been a lot of challenges,” Rohrer said. “We see this as an opportunity to move forward.”

The deputy county executive referenced body cameras and an independent review board as examples of “not so straightforward” recommendations that would require discussion. He added that there’s “no one review model,” and whatever form of oversight is chosen “has to be fair to all, the community, others and police officers.”

Some recommendations in the areas of mental health and use of force have already begun to be implemented, especially ones that repeated recommendations from the previously completed Police Executive Research Forum study.

“We’re not afraid of scrutiny,” Rohrer said. “These powers are granted to police by the public — trust has to be maintained.”

POLICE CHIEF Edwin Roessler said some of the changes already made or in the process of being implemented include the hostage barricade policy, creating a culture of “slow it down, hold and contain” for dealing with tense situations and mandating all first line supervisors report directly to the full-time policy change team.

“The law enforcement profession needs to re-engineer itself,” Roessler said. “The sanctity of preservation of human life has to be paramount.”

During the report from the commission’s independent oversight subcommittee, members of the commission further explained the functions of their recommendations for a civilian review board and independent auditor.

Chiefly, the auditor would be outside the police department and become involved in the process, embedded with police, as soon as a use of force incident that causes death or serious injury has occurred.

The civilian review board, similar to a model in use in Virginia Beach, wouldn’t review the serious cases that involved the auditor, but rather complaints of abuse of authority by police from citizens who are dissatisfied with the final determinations of police in other instances. The review board would then report to the Board of Supervisors.