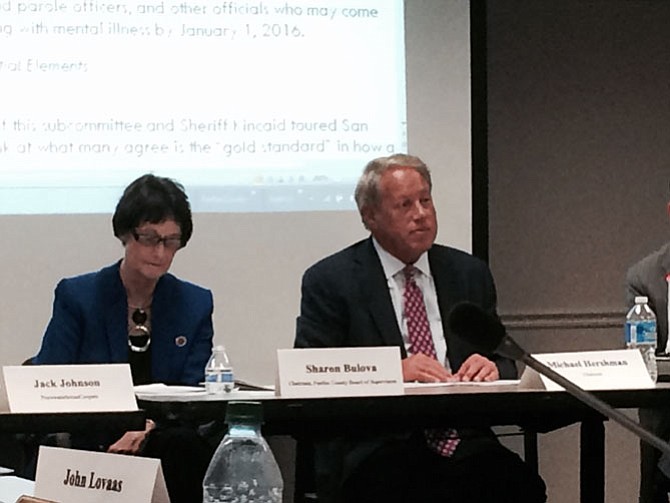 Michael Hershman, chairman of the police commission, with Sharon Bulova at the final meeting of the full commission before recommendations go to the Board of Supervisors on Oct. 20. Photo contributed

After six months of meetings, the Ad Hoc commission created by Board of Supervisors chairman Sharon Bulova to review police practices has concluded its primary work. Chair of the commission’s Independent Oversight and Investigations subcommittee Jack Johnson presented that group’s final recommendations to the full commission on Oct. 8.

The subcommittee unanimously favored creating an Independent Police Auditor position that would “report directly to the Board of Supervisors and would provide oversight in cases of police use of force that lead to serious injury or death, including officer involved shootings,” Johnson’s letter to commission chairman Michael Hershman said.

The report also calls for establishing a seven-member Civilian Review Panel for cases of alleged police misconduct. The panelists are meant to work with the new auditor “as to serious use of force cases so that the panel can provide its views to the Board of Supervisors and the Chief of Police as to policy and practices changes that may be warranted,” Johnson said in the letter.

“Oversight provides a meaningful voice or forum for the public and forms a crucial bridge between the public and the police,” Johnson continued. “Increased transparency, trust, and communication between the police and the public can lead to greater community cooperation in achieving the ultimate goal of decreased crime and increased public safety.”

It was the last full meeting of the ad hoc commission, and in addition to hearing from the independent oversight committee, the commission voted unanimously to support the recommendations of all five subcommittees and to forward the recommendations to the Board of Supervisors. Recommendations from the Mental Health Subcommittee call for an overhaul of how the criminal justice system responds to people in mental health crisis.

Commission chairman Hershman is scheduled to present the group’s recommendations to the Board of Supervisors at its Oct. 20 regular meeting.

“It is Chairman Bulova’s intention to move to accept the report and refer it to staff for discussion at the Public Safety Committee scheduled for Oct. 27 at 3 p.m,” said Bulova’s chief of staff Clayton Medford.

The Board of Supervisors launched the Fairfax County Ad Hoc Police Practices Review Commission in response to public concern over the shooting death of John Geer by a Fairfax County police officer. On Aug. 17, 2015, former Fairfax County Police officer Adam Torres was charged with the second-degree murder of Geer, who was shot dead in the doorway to his own own home on Aug. 29, 2013 after police were called in a domestic dispute. Torres was fired in July 2015, almost two years later.

The commission has been meeting since March as a full commission and five subcommittees. Areas of focus by committee include Use of Force; Communications; Mental Health; Recruitment, Diversity and Vetting; and Independent Investigations and Oversight.

The final report from the Ad Hoc commission is available online at www.fairfaxcounty.gov/chairman/pdf/adhoc-final-10.8.15.pdf.