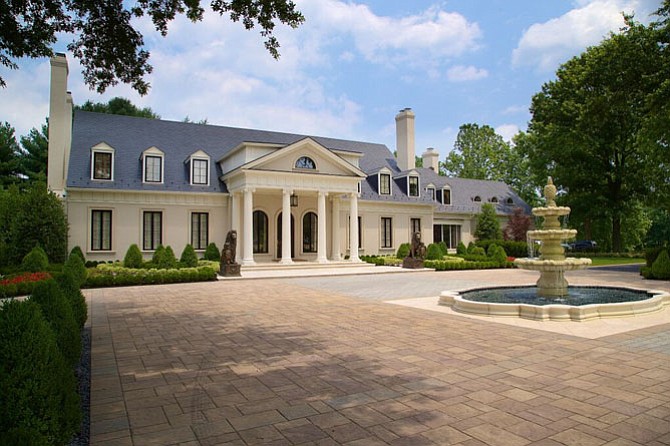 Villa dei Leoni, which is set on a 10-acre property, is one of the homes on the 59th Potomac Country House Tour. Renovations took two and a half years and feature a pool house and pet room with dog shower. Photo by John Troha

The living room of Villa dei Leoni includes blue and gold accents and furniture by Francesca Molon and Rho Mobili.

Four Potomac mansions will open their doors to the public next month for the 59th Potomac Country House Tour.

“In exchange for a pleasurable afternoon spent touring the homes and having lunch or shopping the boutiques and silent auction, tour goers get the satisfaction of knowing that 100 percent of proceeds benefit the homeless, hungry and disenfranchised,” said Susan Dolan, house selection chair, Potomac Country House Tour 2015.

Among the homes is Villa dei Leoni, an estate reminiscent of an Italian villa.

“I fell in love with Villa dei Leoni the moment I first drove by it,” said Dolan. “Its low, elegant lines and park-like setting on top of a hill overlooking the bucolic end of River Road had me frankly infatuated, and convinced that it was perfect for Potomac Country House Tour.”

The villa’s serene appearance was a collaborative effort between owners Donald and Johanna Hoffman and builder Howard Kandel, owner of the Kandel Construction Group. Transforming the home into its current Old World-style took two-and-a half years.

"We started demolition the day our client closed on the house and the design was constantly evolving,” said Kandel. “The scope, level of detailing and level of quality kept increasing as the project continued. The bar was constantly being raised.”

The lower level of Villa dei Leoni pays homage to the Washington Redskins.

“Originally, we were going to just clean up the house … by updating the bathrooms, kitchen and floors and painting,” he continued. “After the first week or two, the owners decided they wanted a more traditional house, something more ‘Old World.’ Ultimately, we completely gutted the inside, outside and grounds.”

For example, the home’s red brick exterior was replaced with stucco in hues of cream. A custom-made, carved marble fountain was added to the courtyard.

Light streams into the foyer through large windows crowned with marble arches. The flooring is made of cross-hatched marble in black, brown and cream. A 1,200-pound Italian table inlaid with marble, seashell and white pearl is the centerpiece of the foyer.

In the dining room, a crackle-glass mirror hangs above the fireplace and is flanked by Schonbek crystal sconces. The walls were painted to resemble marble.

Cream-colored, padded silk covers the living room walls, offering a neutral backdrop for the blue and gold hues that accent the space. The furniture includes pieces by Francesca Molon and Rho Mobili, such as an inlaid wood sideboard that holds a collection of blue French and clear Russian crystal figurines.

A crackle-glass mirror hangs above the fireplace and is flanked by Schonbek crystal sconces in the dining room of Villa dei Leoni.

A large, quartzite island sits in the home’s kitchen, which is accented by a sliding wall of cabinets and white oak floors, made to resemble flooring in the White House. Two full walls of windows offer views of the pool and garden.

The home’s lower level pays homage to the Washington Redskins, complete with trophy cases that display a collection of helmets and game balls. The last jersey worn by late free safety Sean Taylor hangs on the wall like artwork. A slate stone floor and wallpaper made to look like tufted leather help create a pub-like atmosphere.

Other homes on the tour include the Hye Land House, English Country Manor House and Holiday Carriage House, which is used as a guest house for the owner’s children and grandchildren as well as a lower level workshop for the owner's Custom Wreaths of Potomac boutique.

“We are absolutely thrilled with the three grand homes on this year's tour,” said Barbara Heywood, president, Women of St. Francis. “The tour is fun, provokes ideas and is entirely for the charities House Tour has supported for decades.”