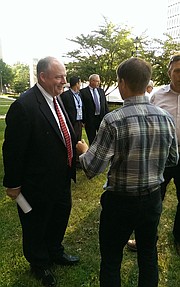 Commonwealth’s Attorney Raymond F. Morrogh (left) announced his view Tuesday, Sept. 8 that none of the Sheriff’s department deputies involved with restraining dead inmate Natasha McKenna during a transport procedure had committed a crime.

Tasers did not directly cause Natasha McKenna’s death, nor are any of the Fairfax County Sheriff’s Office deputies involved with the case being charged with a crime. Those are the positions announced Tuesday, Sept. 8 by Commonwealth’s Attorney Raymond F. Morrogh.

Morrogh spoke in the late afternoon at a press conference outside the Fairfax Courthouse.

“Nobody is disputing the death of Natasha McKenna was indeed a tragedy,” Morrogh said.

McKenna was a 37-year-old woman with a history of mental illness including schizophrenia, bipolar disorder and depression. On Feb. 8, McKenna died while in custody of the Sheriff’s Office.

Days before, Sheriff’s deputies had been attempting to move her from a cell to transportation to the City of Alexandria, where there was a felony warrant issued for her arrest.

During the attempted transport, McKenna was combative, spit and kicked, according to a 51-page report Morrogh released Tuesday. The deputies, having difficulty restraining her, repeatedly used a conducted energy weapon, also referred to as a Taser, in an attempt to subdue her.

The April 28 Office of the Medical Examiner autopsy report for McKenna concluded her cause of death was “excited delirium associated with physical restraint including use of conducted energy device” and that the cause was an accident with contributing factors being the schizophrenia and bipolar disorder.

“The fact she was struggling might not be a conscious decision on her part,” Morrogh said, adding that people’s actions while dealing with these disorders “are no fault of their own.”

Pete Earley of Fairfax, a mental health advocate, author and member of the Fairfax County police practices review ad hoc commission, said, “I’m glad [Morrogh] recognizes the illness. What I don’t understand is why didn’t they back up? They had held that woman in the cell for day after day, why was it so important at that moment to move her?”

After first reading Morrogh’s report, Earley, whose son suffered a mental break in 2002 and now works as part of the Fairfax County jail diversion team for people with mental illness, said he was “very disappointed, in fact very upset” with the cause and manner of death cited in the report.

“I don’t know of any reputable psychiatrist who believes in excited delirium,” Earley said, adding that in the mental health community, the condition is “not recognized as a legitimate cause of death.”

The report also describes her incarceration in Fairfax County, leading up to the day she was to be moved, Feb. 3. The description of her “extraction” by the Sheriff’s Office deputies includes some statements from the deputies themselves that she was one of the strongest and difficult individuals they’d ever dealt with -— male or female.

Though the video of the events leading up to and including the use of the Taser has still not been released to the public, Morrogh’s report includes a written description of it with approximate time markers linked to specific actions, such as four marks of different uses of the Taser.

After reviewing the autopsy report, other cases of excited delirium, the guidelines and standards for operation of the Taser, Morrogh said “not difficult to apply the law to the facts of the case.”

“In my legal opinion, no deputy involved in the case is in any way criminally responsible.”

For Earley, he believes McKenna never should have made it to the jail in the first place, that once it was determined she had a mental illness, she should have been diverted to a different evaluation center. The ad hoc commission, he said, has “laid out specific steps on how to prevent this” in its recommendations to the Board of Supervisors.

“Maybe no one broke a law in how they handled her,” Earley said, “but they created a situation in that jail that led to her getting tasered. If they weren’t legally responsible, they were morally inept. You don’t treat people the way they treated her. As a father of someone with mental illness, just find it callous and heartbreaking.”

Harvey J. Volzer, attorney for McKenna’s family, did not respond to an interview request prior to publication.

Morrogh’s report is available online through the Fairfax County website at www.fairfaxcounty.gov/news/2015/report_of_investigation_of_in-custody_death.pdf.