Potomac: Where, Oh Where, Is Rusty Rooster?
Votes

Potomac: Where, Oh Where, Is Rusty Rooster? 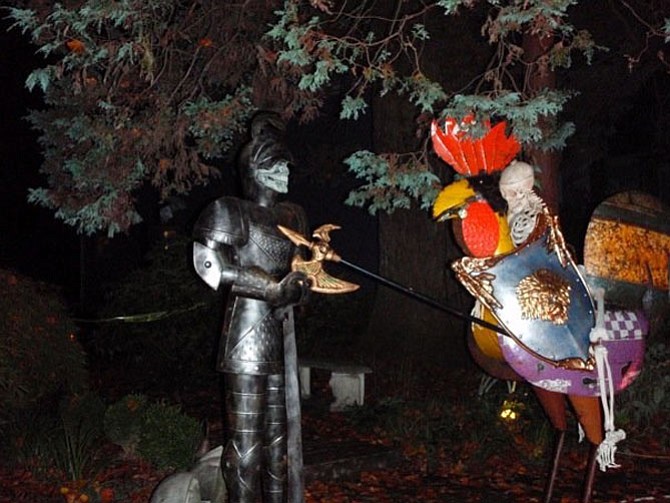 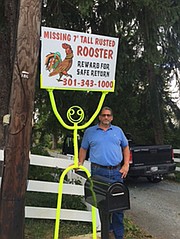 Jon Siegel with the sign seeking the safe return of Rusty Rooster.

Potomac — Rusty Rooster was a well-known landmark along Falls Road. He stood tall and proud, welcoming guests to the 1890’s farmhouse where Joy and Jon Siegel live. One can just imagine him announcing their presence or awakening the neighborhood with his screeching “Cock-a-doodle-do!” Whenever someone asked Joy Siegel where they lived along Falls Road, she would say, “Do you know the driveway with the rusty rooster? “Of course” was always the answer.

“I bought him at an antique show in Texas,” she said. “He stood 7 feet tall, was made of recycled metal — just a wonderful piece of folk art. I loved him from the moment I saw him. We brought him home, and my husband installed him by our mailbox in a concrete slab and he just hung out at the entrance to our drive-way. Everyone who saw him loved him — and everyone knew him. Students and staff at Bullis were greeted by him as they went to school each morning, since we live right across the street from their entrance.”

One morning a few months ago, as the Siegels drove out of their driveway, they realized that the rusty rooster was gone — kidnapped — missing. They thought it was a high school prank, and thus waited to hear that their rooster was in someone’s front lawn, on top of a roof, in a parking lot or hanging from a tree. After a few weeks they got worried and put another folk figure out front, called a "tube dude” with a sign that says, “Reward for the safe return of our lost rusty rooster.”

Sadly, the rooster has not been returned.

“We have received so many heartfelt calls telling us they are so sad he is gone,” Joy Siegel said. “Not a single week this summer has gone by without us getting a couple of calls that say, ‘Here’s a tip — and then they give us an address that might be in Potomac and even out of the county. We have often received calls saying, ‘I just want you to know I miss seeing your rusty rooster’ and one day a handwritten note came from a little girl. It said, ‘Dear Neighbor, What happened to the rooster? I miss him.’ You think everyone just drives by and ignores things but he apparently had quite a long list of admirers.”

When Jon Siegel had the sign made for the front yard stating that the rusty rooster was missing, the company that created the sign would not accept payment. They just wanted to help promote returning the rooster to its rightful owners.

“It’s really shown us that we live in a wonderful, caring community,” Joy Siegel said. “Whoever stole him had to use tools and a sledge hammer, because the rooster was cemented into a slab. I really think he is gone forever — but I keep hoping he’ll be returned.”

Help the Siegels find their rusty rooster. If you know his whereabouts, call Jon Siegel at 301-343-1000.