Still striving to be the Connection to your community. 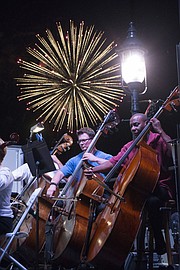 Fireworks light up the sky July 11 as musicians from the Alexandria Symphony Orchestra play Tchaikovsky’s “1812 Overture” to celebrate the 266th birthday of the City of Alexandria at Oronoco Bay Park. Award-winning photo by John Bordner.

Connection Newspapers won dozens of awards from the Virginia Press Association for work done in 2015. Award winners were announced on Saturday, April 9, at an awards banquet in Richmond.

While the papers won awards in many categories, the common underpinning was community journalism, accessibility of information, and reporting on critical issues like transparency in government.

Thematically, the papers won multiple awards for stories and sections that were informative and helped make communities, events and resources more accessible to our readers.

Print newspaper obituaries play a vital role in local communities, reflected in Jeanne Theismann’s first place award for three obituaries in the Alexandria Gazette Packet. Earl Lloyd was born into "the cradle of segregation" yet persevered to become the first African American to break the color barrier in the NBA. Dr. Robert Wineland,­ “Dr. Bob,” was a WW II veteran and survivor of the Battle of the Bulge. He was a beloved local doctor for more than 60 years. And Ferdinand Day was the first African American to be elected to chair a public school board in the state of Virginia.

We are lucky to have cartoonist Steve Artley to skewer and edify many issues, including his first place cartoon that suggests Alexandria could solve parking and housing problems by placing both on barges in the Potomac River.

Jean Card, Renee Ruggles and Laurence Foong have collaborated over several years on the Insider’s Guide to the Parks, which won awards in Mount Vernon and Vienna/Oakton, capping several awards for informational graphics.

Reporting on elections, the environment, health and fitness, and organizations that are designed to help others also garnered awards.

Kenny Lourie won for his ongoing column writing about living with cancer. Lourie both lives and writes with humor and perspective. The judge said, “Though filled with heavy subject matter, the author hooks readers by using his first-person perspective, humor and emotion to describe the events of his life. These columns grab your attention from the first paragraph.”

Natasha McKenna’s great aunt Eudora Paul carries a sign with McKenna’s words the day she was tasered by officers from the Fairfax County Sheriff’s Department.

Abigail Constantino’s photo that shows the great aunt of Natasha McKenna at a protest of McKenna’s death in custody, won second place for general news photo. Eudora Paul’s sign displays McKenna’s last words: “You promised you would not kill me.”

Jeanne Theismann, whose profile includes that she “dreams of one day writing headlines for the New York Post,” won second place for headline writing in the Alexandria Gazette Packet. Headlines: Some Like It Haute, story about the 10-year anniversary of a boutique warehouse sale; Soul Providers, a story about volunteers recognized for service to seniors; Something to Wine About,­ on the opening of a new wine cellar; Luck Be a Lady,­ on the opening of a new bath apothecary called Ladyburg; To the Rescue, about­ a nonprofit started by firefighters to collect toys for underprivileged children.