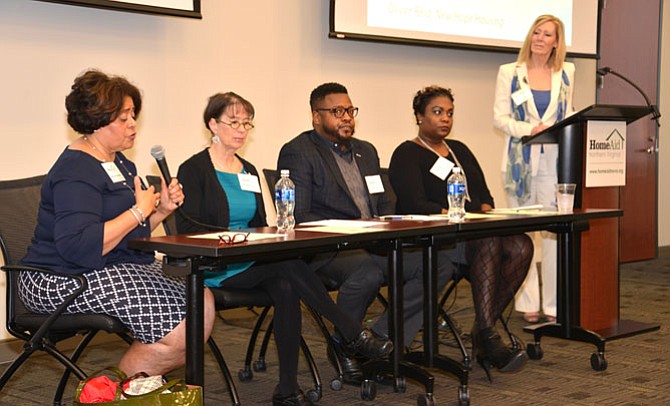 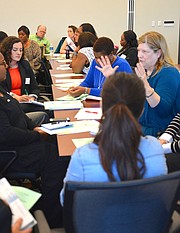 Let’s talk about it – the attendees at the HomeAid Housing Forum break into groups to share their experiences and expertise and look for ways to collaboratively prevent and end homelessness in the region.

From left -- Susan Mekenny, member of NVAR Cares, the charitable arm of the Northern Virginia Association of Realtors, speaks with U.S. Army Capt. Kerri Turner at the Forum. Turner, who is also Ms. Veteran America 2015, was the event’s Keynote Speaker and highlighted the plight of homeless female veterans, especially those with families.

In 2008, Fairfax County partnered with the City of Falls Church to adopt an ambitious strategic plan to address the issue of homelessness in the region. The following year, the Fairfax County Office to Prevent and End Homelessness was established to “manage, coordinate and monitor the day-to-day implementation” of the plan, with its ambitious target date of 10 years to achievement. In 2014, the county accepted the “Mayor’s Challenge to End Veteran Homelessness” as announced by First Lady Michelle Obama, and supported by the Department of Housing and Urban Development. This one came with an even more aggressive deadline: accomplish the mission by the end of 2015.

The numbers for both goals are certainly encouraging. In November, Gov. Terry McAuliffe declared that Virginia had become the first state to reach that “Challenge” milestone, with every veteran having housing, except for those who had been offered, but refused shelter. By “functionally” ending veteran homelessness, the state certifies that it has in place systems to prevent veteran homelessness wherever possible, and to see that it is otherwise a “rare, brief, and non-recurring experience.” To maintain this status, being able to secure housing for willing veterans within 90 days, and having more homes readily available than the numbers of veterans without shelter, are parts of the requirements.

Among the general population of homeless, the numbers have also decreased. According to the 2016 “Point-in-Time” census (an annual survey where county personnel and volunteers scour the streets, woods and other areas to approximate the numbers of area homeless) conducted on Jan. 28, the total number of homeless declined by 42 percent since the implementation of the 10-Year Plan. In just the last year, the numbers fell from 1204 to 1059. While the number of homeless singles remains relatively unchanged since the last survey, homelessness among families declined from 715 to 577. Even better news is that there are 33 percent less families in emergency shelters, and at the time of the survey, shelters reported vacancies.

It looks like there are battles on this front finally being won, but with over 1000 of our neighbors - that we were able to count - still unhoused, the war on homelessness is far from over, according to Karen Cleveland, president of the Cleveland Coaching Group, president and CEO of Leadership Fairfax, and the moderator of the 2016 HomeAid Northern Virginia (HANoVA) Housing Forum, held on April 7. The annual gathering brings together those who work directly with the homeless and with those who are struggling to avoid homelessness, from across all of the jurisdictions of Northern Virginia. “This is a unique opportunity to meet with, and learn from, colleagues who understand your challenges, to share best practices, and brainstorm a bit and maybe come up with some new ways of tackling the problems,” noted Cleveland.

HomeAid Board president Greg Carter, a senior vice president with Bank of America Merrill Lynch, opened the event with a welcome, and an invitation for all to check out his company’s free website “Better Money Habits.” “When I say free, I really mean it,” said Carter. “No passwords, no fees, so sign-ups, just access to easy-to-understand tips and instructionals on better financial planning and management…ways to save money.” Since assisting their clients with just these issues is often a part of their work, the attendees seemed interested and pleased to add the website to their resource kit.

Following a quick “stand up and introduce yourself” exercise, Cleveland introduced a panel of four – Minerva Labrador with Northern Virginia Family Service, Michele Porter-Will of Volunteers of America Chesapeake, Oliver Reid with New Hope Housing, and Blair Copeland from Carpenter’s Shelter – and the discussion on “Keeping People Housed” began.

“Affordable housing. That’s the stumbling block over and over again,” declared Porter-Will to the nods of agreement from her fellow panelists and most of the audience, as well. “Especially for families,” she added. “People with good-paying, stable employment can find it difficult to afford a decent, safe place to live in our region. Now try doing it on minimum wage or less.” Credit issues, health issues, poor job histories, and the unexpected difficulties of life like divorce, abandonment, domestic abuse, and sudden job loss also contribute to pushing people into homelessness.

Lack of affordable housing has been further highlighted by the recent focus on “Rapid Re-housing” as the first priority. Reid explained that the paradigm shift to quickly finding housing for the homeless, then “wrapping the services around them in this more stable environment,” means less time to work with the client to find suitable housing or to help them correct barriers to good housing options like poor past credit. Historically, assistance to the homeless meant accepting them into shelters where case managers and others would work with them to solve the problems and issues that had led to their situation, sometimes for months, if not even years, before placing them in independent housing. The “Rapid Re-housing” model sometimes leads to a “race against time” was Blair Copeland’s assessment. While agreeing that the model offered a stable environment from which clients could begin their journey upward and was especially favorable for homeless families, Copeland admitted that it often left them scrambling to find housing before they could address the obstacles, prepare the client, and create a partnership with a landlord willing to take on what they might view as a higher-risk tenant. Reid’s New Hope Housing in particular requires a strong relationship with landlords since his organization often deals with clients who have served prison time, and some who are registered sex offenders.

The change to “Rapid Re-housing” also meant that new roles – like Housing Locators - have had to be created in the organizations and agencies represented, and other personnel have had to learn new skills and deliver them “even more rapidly,” said Minerva Labrador. “The more traditionally specialized roles of service staff are becoming more integrated. There’s a lot less ‘you’ll have to wait until Tuesday for the case worker to address that’ than we had before. That’s a good thing,” said Porter-Will.

Working cross-jurisdictionally within the region, and even out of state, was another significant challenge discussed by the service providers. Copeland noted that sometimes to find suitable and affordable housing meant relocating clients out of the area. Some of the attendees spoke of relocations to Winchester, Front Royal, Hagerstown, Maryland, and even towns in North Carolina, but all expressed concerns about the follow-up and continued services these movers would receive – and there might be the perception that Northern Virginia is merely “moving the problem along, and that is not what we are trying to do,” insisted Copeland.

After the panel concluded, the attendees were treated to U.S. Army Captain Kerri Turner as the Keynote Speaker. Capt. Turner also happens to be Ms. Veteran America 2015 and is a spokesperson for Final Salute, a nonprofit whose mission is to find safe and affordable housing for women veterans and their families. By the looks on their faces, Turner shocked quite a few in the audience when she informed them that neither the Veterans Administration nor the Department of Housing and Urban Development had kept any records on homeless female vets before 2011. Final Salute’s founder was a female veteran and single-mother who served her country for 15 years, but when faced with serious adversity – including head, throat and neck cancer - she was advised to seek assistance through welfare programs since the military did not have programs for female veterans with families. Not long after her circumstances and health improved, Jaspen Boothe started Final Salute to assist “the forgotten soldiers.” Since 2010 the organization has assisted over 900 women veterans and children in over 30 states and territories.

A CHAPTER of HomeAid America, HomeAid NoVA is a nonprofit that was started in 2001 by members of the Northern Virginia Building Industry Association. Founded on the belief that the “best way to solve homelessness is to ensure that everyone has a safe and stable place to live,” the organization’s partners build and renovate housing and shelter facilities. To date, they have completed over 100 projects, and with so much donated labor, expertise, materials and resources, they are able to help shelter organizations save significant amounts of money that can be used to fund vital programs and services to keep their clients housed and leading better lives, and to help others avoid homelessness.

The attendees at the HomeAid Housing Forum want everyone to realize that ending homelessness really does “take a village” and that it is in everyone’s best interest to help prevent it, and to help return our homeless neighbors to safe and productive lives in the community. For information on the issue and how to help, there are numerous agencies and organizations to contact. Starting points can be HomeAid NoVA at www.homeaidnova.org or the Fairfax County Office to Prevent and End Homelessness at www.fairfaxcounty.gov.