Ending Homelessness: ‘It Can Be Done’
Votes

Ending Homelessness: ‘It Can Be Done’ 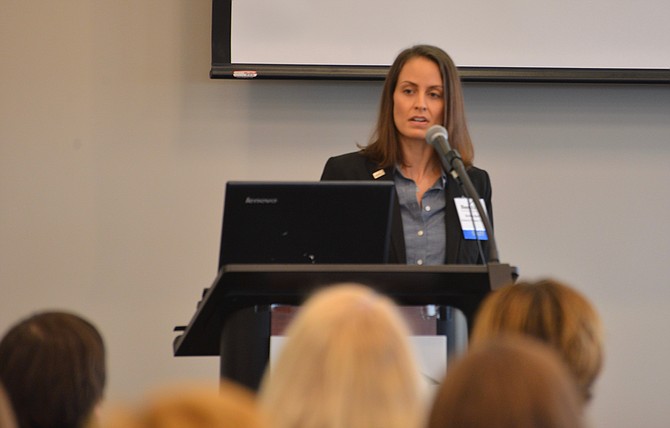 Attendees at the Housing Forum divided into round table groups to tackle some of the issues they all face, like “Landlord Engagement,” and “Resource Gaps and Needs.”

HomeAid Northern Virginia (HANV) brought together about 100 housing and homeless service providers from a variety of public, nonprofit and faith-based organizations at its annual Housing Forum on March 30, giving them the opportunity to share their challenges and best practices with their peers, while learning about some of the latest trends in the fight to end homelessness.

Newly appointed HANV executive director Kristyn Burr opened the event before turning the program over to moderator Karen Cleveland of the Cleveland Group.

Samantha Batko, director of the Homeless Research Institute, National Alliance to End Homelessness, was the program’s keynote speaker and started her section with positives, noting that Virginia was the first state to functionally end homelessness among veterans. “On Tuesday,” she added, “Bergen County, New Jersey announced that they were the first to end chronic homelessness. We know it can be done.”

How were these successes achieved? “Through ‘Rapid Rehousing,’ the value of data, and a determined community-based partnership,” said Batko.

The switch to a focus on the Rapid Rehousing model was a major topic at last year’s forum and the cause for considerable concern among some of the providers. The strategy represents a paradigm shift in previous methodologies to end a person’s or family’s homeless situation by pulling out all the stops to first find suitable housing for the client(s) and then wrapping any services they may need — financial assistance, help finding employment, overcoming past credit problems, mental health treatments, etc. — around them once they have been placed in a stable housing environment.

THE TRADITIONAL APPROACH to helping the homeless in the past has been to take them into shelters and then work with them to resolve issues and obstacles before placing them in an independent living situation. While this strategy can make finding them suitable housing less challenging, the process could take months, sometimes years. Remaining in shelter for that long creates a different set of problems, from overcrowding or impossible waiting lists for shelter placement, to potentially exacerbating the anxiety of the homeless, particularly children and youth, who find it difficult to adjust and face the stigma of their situation at school or during other social activities.

Rapid Rehousing also put further pressure on service providers. It’s easier to provide services and to monitor progress when the clients are grouped in shelter facilities and have the benefit of supervision and readily-accessible support. Monitoring hundreds of people scattered around the region in a variety of housing situations can be a challenge.

But the housing and homeless service providers have, for the most part, risen to the challenges. The official statistics for the homeless population for 2016 are not yet available, but the anecdotal evidence shared by the attendees indicate a positive result to the shift in strategy.

“Trust and a good relationship with landlords is essential,” said one attendee. When trying to place clients who are still working through obstacles, or who have credit problems, who have been evicted — possibly more than once — who have served prison terms, or who may be registered sex offenders, requires getting out into the rental community and honestly addressing the landlord’s concerns and responding swiftly and appropriately when there are problems.

Batko also commented on the current political climate, highlighting several topics of much discussion by groups like the National Alliance to End Homelessness. According to Batko, although federal dollars allocated toward homeless prevention and remediation make up the smallest percentage of the federal budget at approximately $2.5 billion, predictions for the FY2018 budget call for the lowest level of financial support since 1962.

Potential cuts to the agencies that help provide services to the homeless or those who are only a step away from that condition, changes in health care laws and in other social safety net programs could greatly increase the numbers of people that suddenly find themselves without a place to live.

Batko stressed two main points before concluding her remarks. First, she noted, “Efficiency. Agencies have to use the data, work together, re-think strategies” to decrease the length of time that people spend homeless, she said, and the organizations must be prepared to validate the outcomes of their efforts.

Secondly, Batko called upon the attendees to learn how to advocate. Many nonprofits operate under the misconception that they risk their exempt status if they take, and voice, a position on politically controversial issues. There are rules and limitations, but Batko urged the attendees to speak out and find ways to magnify their voices. “You are the experts,” she said, and should be able to offer that expertise to the lawmakers.

Batko suggested developing stronger relationships with local elected officials to inform them and to ask for their support, and the support of faith-based communities, in advocacy efforts. “Call now,” she said, to ask Virginia lawmakers to pass the extension of Medicaid in the state. Start efforts now to protect funding and to resist “block grants” as funding solutions, since they are often seen as “funding cuts.” In their take-home packets, the attendees received a primer on how to avoid any pitfalls when publically addressing policy issues.

BEFORE THE PANEL DISCUSSION got underway, there was a reminder that as of June 30, organizations seeking HUD funds will have to have adopted the standards of practice set forth by the National Alliance to End Homelessness — a requirement of which not everyone in the audience seemed to have been aware. The Alliance has toolkits for implementation and measurement available on their website at www.endhomelessness.org.