From 350 students in 1965 to 750 students today, Westbriar boasts outstanding academic programs and recognition. 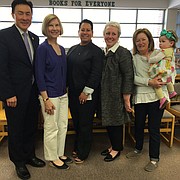 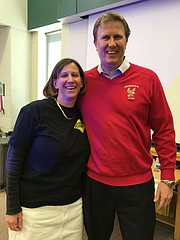 Tara Demarest Tompkins and Andrew Blount were early-1980s students at Westbriar Elementary. Today, Tompkins is back at Westbriar as an advanced academics resource teacher; Blount is an assistant principal at Centreville Elementary School.

In the early years of Westbriar Elementary School’s 50-year-run, there were but 350 students from the neighborhoods along Old Courthouse Road on down to Browns Mill. In 2009, Westbriar hit 500. Today, the school has 750 students, a Level 4 Advanced Academics Program (AAP) center, and, on April 15, the school celebrated its 50 birthday with all-day events and activities for its 750-member student body. Former principals and teachers returned to commemorate the school’s history at the invitation of current principal Lisa Pilson.

“We didn’t even have enough students for two full classes,” said 1989 to 1999 principal Ricki Harvey. “Now, we need new buildings to accommodate all the students.” She surprised the sixth grade audience when she told them the schools did not have SOLs then.

Harvey, joined for the event by former principals Joanne Goodwin and Jeanette Martino, spoke to an upper-grade class in the library, recollecting her tenure at Westbriar and the changes to the school and curriculum since then.

FORMER PRINCIPALS addressed classes from upper grades and those students shared their memories of tutelage under them. The ambiance was one of humor and wistfulness. Virginia Del. Mark Keam (D-35) stopped by to listen to their stories and laugh along with the children.

Joanne Goodwin, principal from 2009 to 2012, regaled the sixth graders, who were second graders when Goodwin left, with reminiscences and the kids responded with stories of their own, some of them tattling on their classmates in the process. Goodwin, alluding to her smooth wavy hair, informed the children that she had to blowdry her hair every day to get it smooth because her hair is curly. One day, she came to school without doing so and her hair was out of control curly. Her students, seeing her hair amiss, made a point of telling her, “Mrs. Goodwin, it’s not crazy hair day.”

While Goodwin was principal, Northern Virginia experienced a major snowstorm shutting down the schools for a week. Parent volunteers were on-hand during the closure to help clear sidewalks and walkways. Goodwin was remembered for walking about with a snow shovel in her hand when school reopened, a teacher noted.

Throughout the celebration day, classes hosted art exhibits, danced away in the gym, hosted special lunch-time activities, and watched a classic film.

Westbriar operates with 13 classroom trailers out back housing the fourth, fifth and sixth grades. Three resource trailers take their places with them. When the new addition is completed, in time for the new 2016-17 school year, the trailers will be gone and the student body will learn together again.

Westbriar ES was named a Blue Ribbon School in 2013 --- the only elementary school in the Commonwealth to be recognized “Blue Ribbon School.” In 2014, Westbriar received the Virginia Board of Education Distinguished Achievement Award.

Westbriar’s Level IV AAP center opened three years ago, bringing to the school kids from throughout the Vienna area who benefit from advanced academic programs in all core areas of instruction. More than 175 students participate in the Advanced Academics Program there. The school has a collaboration with George Mason University with math and math modeling, and, a Model Fairfax Friends Forever Program that focuses on peer mentoring. This program will soon be implemented throughout Fairfax County Public Schools. Students from Westbriar presented at this year’s Science and Engineering Festival in Washington, D.C., held the weekend of April 16 and 17.

Many of Westbriar’s current students are the children of young parents who attended Westbriar in the 1980s. Several years ago, two 1980s Westbriar students became teachers at Westbriar after college graduation. One, Andrew Blount, left for a Fairfax County Public Schools position as an assistant principal, while the other, Tara Demarest Tompkins, remains at Westbriar as an advanced academic resource teacher.

Jeanette Martino served as principal of Westbriar from 1999 to 2009, and, the year she left, the school hit 500 students, a landmark status for Westbriar. A current kindergarten teacher, Ewa Meoni, was a parent volunteer before joining the school as a teacher.

Funds raised from the event will go toward upgrading Westbriar's playground.

Tickets are priced at $50 per person, $1 for every year of Westbriar’s existence.

For more information on the gala celebration, go to http://www.westbriarpta.org/50th-Anniversary-Gala-Auction.