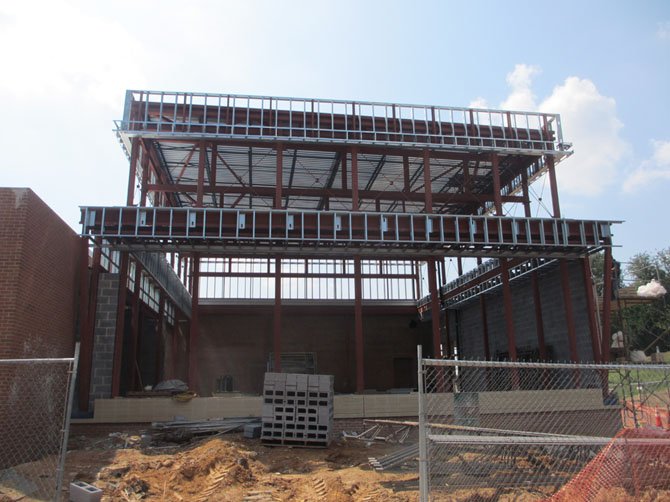 The $60 million renovation of George C. Marshall High School will be completed by the start of the 2014 school year. Photo by Donna Manz. 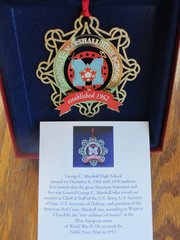 In 1962, President John F. Kennedy ordered the blockade of Cuba, warning Cuba and the Soviet Union that missile placement there would bring war. In that same year, the first black registered at the University of Mississippi, under the protection of U.S. troops. Astronaut John Glen orbited the earth as the first American to do so. Marilyn Monroe died of an overdose, and Nazi Adolf Eichmann was hanged for war crimes.

George C. Marshall High School opened on Dec. 6, 1962 with 1450 students. It is named after the great American statesman and five-star General George C. Marshall who served our country as chief of staff of the U.S. Army, U.S. secretary of state, U.S. secretary of defense, and president of the American Red Cross. Marshall was, according to Winston Churchill, the “true architect of victory” in the West European arena of World War II. He received the Noble Peace Prize in 1953.

The PTSA is kicking off the 50th anniversary school year with events and programs and is inviting the public to celebrate along with the school. From the homecoming parade and game on Sept. 28 to the ballroom gala, Marshall High School alumni and supporters are welcome to attend.

“We are very lucky all our kids graduated rom Marshall … It’s a little jewel in Tysons Corner.”

“The most exciting thing is our guest speaker at the gala,” said 50th-anniversary celebration co-chair, Malou “Maria” Rennert.

THE GUEST SPEAKER is barrier-breaking runner and Emmy-award winning commentator Katherine Switzer, a Marshall graduate and first woman to run the Boston Marathon. Switzer graduated in Marshall’s first class in 1964 and is among the inductees in the 2012 Marshall Hall of Fame.

“Marshall is such a welcoming home,” said Rennert, a Reston resident whose children all graduated from GCMHS in its I.B. program. “When you walk into George C. Marshall, it’s a different atmosphere from other places.

“In the coming years, I see George C. Marshall High School as a focal point of the redeveloping Tysons Corner area.”

“Teachers really care about the students. It’s a very diversified population,” Rennert said, noting that there are approximately 99 countries represented, and 54 languages.

The next anniversary event following the homecoming celebration is the open-to-the-public golf tournament on Oct. 5 at Penderbrook Golf Course in Fairfax. The tournament is organized in cooperation with the school’s girls’ lacrosse team. On Nov. 9, the PTSA is hosting a gala dinner at the Fairview Marriott, featuring the induction of six GCMHS graduates into the Marshall Hall of Fame and a silent auction.

Marshall’s limited-edition Christmas ornament is available for purchase at www.gcmptsa.org at $20 per ornament. On this website, Marshall fans can also buy tickets for the gala and register for the golf tournament. Prices for gala tickets are $90.62 per person or $175.62 per couple if purchased by Sept. 30.

The PTSA is still looking for sponsors for the anniversary events, and donations to PTSA are welcomed. Silent auction donations are being accepted; the auction takes place at the gala. Just in-time for the 50th anniversary, the newly-developed George C. Marshall Museum at the school is expected to be dedicated this fall.

“Marshall is an amazing community of learners,” said George C. Marshall High School Principal Jay Pearson. “Our international student body comes from all corners of the world. Marshall is one of the top-performing high schools in Fairfax County, Virginia, and the nation. For a decade, we have been on a journey of continuous improvement as a professional learning community.”

Over 50 years, the school has changed demographically, academically and physically. The physical plant is undergoing a $60 million renovation, remodeling the building and adding new space. The renovation is expected to be completed by the start of the 2014 school year. It’s hard to imagine now that it was about 20 years ago there was discussion of closing the school because of declining enrollment. The I.B. program and the inclusion of Chinese helped to secure Marshall’s longevity.

“In the coming years, I see George C. Marshall High School as a focal point of the redeveloping Tysons Corner area,” Pearson said. “We will maintain high levels of performance as we innovate to meet the needs of our 21st century students.”

THERE IS A MOVEMENT afoot to change the school’s address to a Tysons Corner one, said anniversary co-chair Sonia Guzman. “We’re trying to get it changed. People are confused by the Falls Church address.”

Gen. George C. Marshall was a statesman who served under President Franklin D. Roosevelt during World War II, creating the post-war foreign aid reconstruction plan named after him. He was Roosevelt’s chief of staff and general of the army, and Prime Minister Winston Churchill called Marshall the “true architect of victory” in the western European theatre. In 1953, Marshall was awarded the Nobel Peace Prize. After a lifetime of public service, Marshall died in 1959 at Walter Reed Hospital and was buried at Arlington Memorial Cemetery. His Leesburg home is open to the public.

George C. Marshall High School in Fairfax County is the only high school in the country named after the statesman. For the students who come from the pyramid and those who come for the I.B. program or Chinese language instruction, Marshall is a special place.

“We are very lucky all our kids graduated from Marshall,” said Rennert. “It’s a little jewel in Tysons Corner.”

See www.gcmptsa.org/content.php?102 to learn more about the 50th anniversary celebration throughout 2012 and spring 2013. You can buy tickets for events, order the commemorative ornament and register for the golf tournament online.