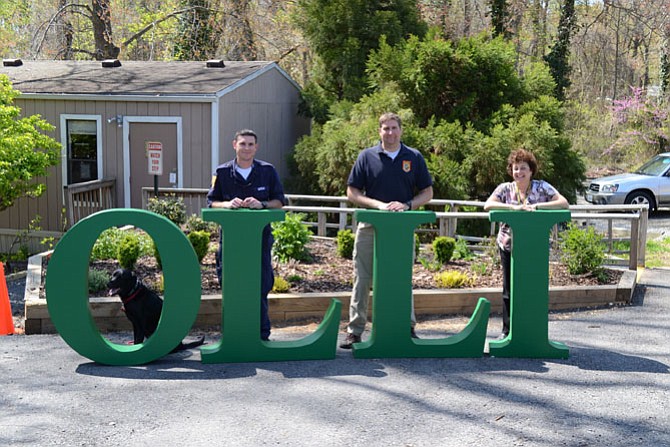 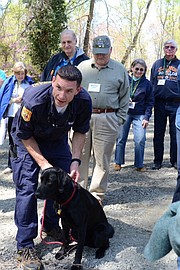 On Friday, April 15, the Osher Lifelong Learning Institute (OLLI) at George Mason University was visited by a team from the Fairfax County Urban Search and Rescue team. Lt. Scott Schermerhorn led this informative session, but OLLI members were more enchanted by K-9 team member Angus, a black lab, and his handler, Technician Paul Serzan. (If you heard about a missing 14-year-old autistic girl earlier this month, you should know that Angus and Paul were the ones who found her in just a few minutes, safe and sound.)

The OLLI audience spent a half-hour asking the really important questions: How old is Angus? Five. How long will he work? Until he’s 8, or at most 10 years old. What happens then? He’ll live with me (Paul) still, as a household pet. How many of the unit’s dogs are female vs. male? Just two are female, while the other five are male. Why? The males do a better job because they listen. (This response brought a collective groan from the female audience members.) The class ended with a doggy demo in the field behind TA-3 where, in mere seconds, Angus located the “missing” lieutenant who was hiding behind a tree.

Angus and six other dogs are important members of the Search and Rescue team and, along with dozens of human team members and 50,000 pounds of food and equipment, they travel to man-made and natural disasters worldwide, saving many lives. Virginia Task Force 1 is federally sponsored by the USAID, and comprises emergency managers and planners, physicians, paramedics, and wide range of specialists.