OLLI Talk on ‘Beyond the Whispers’ in Fairfax
Votes

OLLI Talk on ‘Beyond the Whispers’ in Fairfax

With dog Angus, members of Virginia Task Force 1 give lecture to OLLI seniors. 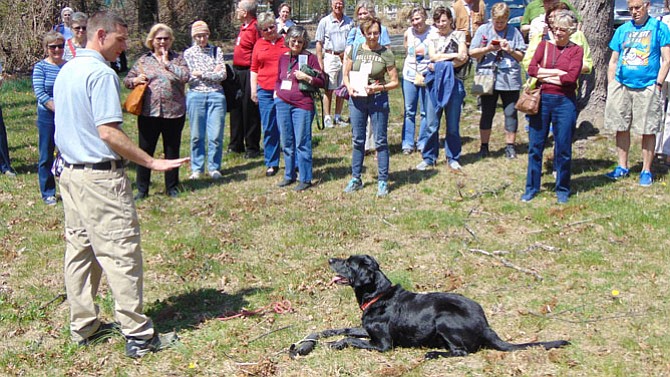 Paul Serzan, a Firefighter Paramedic and K9 Handler with the Virginia Task Force 1, works with his dog Angus. Photo by Steve Hibbard. 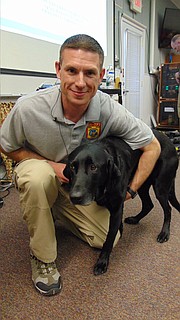 Members of the International Urban Search and Rescue Task Force 1 gave the PowerPoint lecture and demonstration, “Beyond the Whispers,” to a crowd of 50 seniors at the Osher Lifelong Learning Institute (OLLI) at George Mason University on Friday, April 13, 2018.

Paul Serzan, a Firefighter Paramedic and K9 Handler with Virginia Task Force 1, who brought his dog Angus, gave the presentation along with Capt. Alex Obert of the Fairfax County Fire & Rescue Department, on the work they do to save people’s lives. With the assistance from Angus, a 7-year-old American purebred Black Labrador Retriever, they demonstrated outdoors how dogs, through smell, can find people trapped under buildings or rubble.

Serzan, who has 10 years with the Fairfax County Fire Department and seven years on the Virginia Task Force 1, is certified in disaster and wilderness live find, so he’s an expert on finding lost hikers, someone wandering with Alzheimer’s or autism or anybody trapped in rubble.

Capt. Obert, who has been with the Fairfax County Fire and Rescue Department for almost 17 years, and with the Task Force 1 for 12 years, works as Station Captain at the Fair Oaks Firehouse on Route 50. The Task Force has both international (USAR Team 1) and domestic (Virginia Task Force 1) disaster response experience.

They said the world-famous Task Force 1 Team is called into action during natural disasters like flooding, typhoons, tornadoes, tsunamis, earthquakes, hurricanes, and cyclones in addition to bombings. It has been deployed internationally to Nepal, Japan, and Haiti; as well as Hurricanes Irma and Maria in Puerto Rico and the Virgin Islands and to the bombing in Oklahoma City.

THE TEAM, which was established in 1986 after helping on an earthquake in Mexico City, relies on the expertise of its emergency managers, planners, physicians and paramedics and includes specialists in structural engineering, heavy rigging, collapse rescue, logistics, hazardous materials, communications, canine and technical search.

“We have 210 members to fill 19 positions. We are able to deploy multiple teams at any time. We can go out as a heavy team and medium team without a problem and still have people and firefighters, men and women, that are able to respond to emergencies here in Fairfax County,” said Serzan. “We don’t have to call for mutual aid. We have everybody that we need from our department. There’s no putting units out of service. There will always be a fire engine at every single house fully staffed.”

He continued: “We are highly trained and deployable at any moment’s notice…. Our average deployment is supposed to last 10-14 days; it’s gone up to 21; and when we went to Puerto Rico it was 24. We are able to work 24-hours nonstop at two sites, and that’s what the United Nations requires us to do in order to be certified with them to go to international deployments to be able to work. So, we have enough people, enough men and women to take care of that.”

Founded in 1991, OLLI at GMU was inspired by the Fairfax County Commission on Aging and visionaries Kathryn Brooks, Lilyan Spero, Ken Plum and Shirley Fox. It began as a learning in retirement nonprofit center with 100 members. Today the institute has blossomed into a multi-campus operation (located in Fairfax, Reston and Sterling) with 1,200 members across Northern Virginia.

Affiliated with George Mason University, OLLI offers classes for seniors and retirees but there’s no age restriction, no homework, no exams, no grades, and no credit, said Karen Nash, Finance Associate with OLLI. The instructors come from GMU, the community, or are OLLI members themselves. Classes are free but the annual membership is $425 or an introduction membership is $150.

According to Rita Way, OLLI Board Member, OLLI offers 200 courses in its Spring catalogue including classes on music, art, philosophy, history, science, writing and more. In addition, there are OLLI clubs that members have formed, such as writing, needlework, classical reading or music, as well as special events like field trips to museums, plays and musical performances.

“OLLI is a wonderful institute for those of us that have either retired or have the time now to enjoy getting more education. There are marvelous courses that are authored,” said Way. “You can get involved as much as you want or as little as you want, and perhaps do things that you were never able to do when you had a job.”

According to Stephanie Trachtenberg, OLLI Special Events Committee Volunteer, “OLLI is made up of people who want to continue learning. You become a member and you can take unlimited classes on any topic. There’s a catalogue that’s put out by term.”

EXAMPLES of OLLI classes include speaker Amelia Draper, the weather person from NBC-4; Eye Health for Age 55 and Older with a local optometrist; and NBC-4 News Reporter David Culver.

“We had a breakfast this morning honoring the OLLI teachers and the main message that came out was we just love learning and we love to have fun, and that’s what retirement should be about,” said Trachtenberg, a member since 2013.

For more information on OLLI, visit the website: www.olli.gmu.edu.