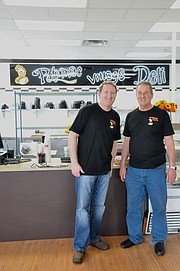 At the newly opened Potomac Village Deli in the Kentlands are owner Adam Greenberg (right) and his partner Sam Lerner. 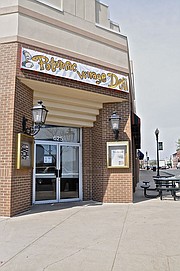 The new Potomac Village Deli in the Kentlands

“We’re back,” said Potomac Village Deli owner Adam Greenberg. The much loved, sorely-missed deli is not returning to the village of Potomac — but one can drive just 10 miles north to the Kentland’s Market Square to dine on homemade bagels, breakfasts (served all day), deli sandwiches, New York Cheesecake — and all of the other food the Potomac Village Deli has served since 1975.

“The new Potomac Village Deli is an authentic Jewish-style deli, unlike any in our area. No one opens up a real deli anymore because it is so incredibly work intensive,” Greenberg said. “Everything is made from scratch – the bagels, brisket, corned beef, cheesecakes; only the fish and pickles come from New York City. There used to be 1,500 delis across the country and there are now only 150 true delis. Even New York City has lost most of their famous delis. But Sam Lerner (known as the “Deli-Man”) and I are bringing a piece of Times Square to Kentland’s Square.”

Greenberg said the deli also bakes fresh bagels daily, using specially filtered water from one of Greenberg’s other businesses — Bagels ‘N Grinds — a bagel shop in Hanover, Md. The bagel shop uses a $50,000 filtration system designed to emulate New York City water by purifying water then adding certain minerals that aid in the baking process. “My belief is that one of the reasons New York bagels are so good is because of the mineral content in the water that comes down through the Catskills. And we have a variety of cream cheese selections,” said Greenberg.

The “new” Potomac Village Deli will seat 70. The restaurant is open 365 days a year and will soon feature an outdoor patio for even more guests. The restaurant also runs an extensive catering business.

The deli also will feature pizza and calzones after 4 p.m. and the Traville Potomac Pizza location will continue to deliver to homes in the area. Its catering business will continue.