Appetite: The Chewish Deli Almost Ready to Open in Alexandria 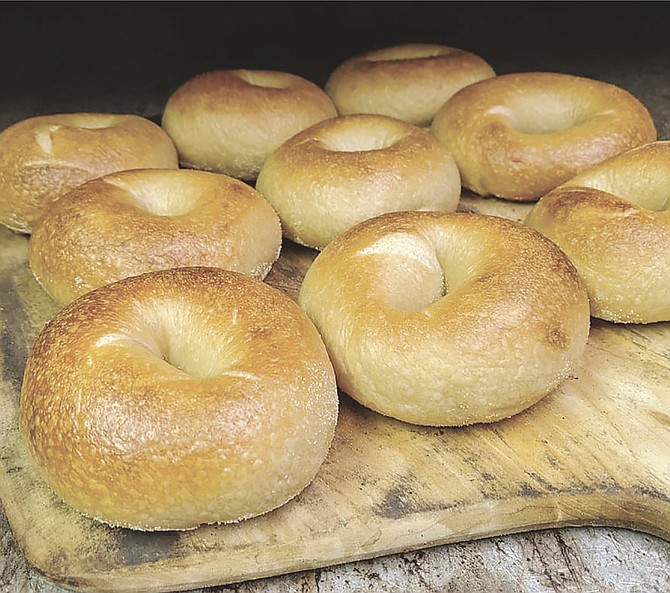 Bagel lovers, rejoice. Soon, a new bagel shop will be opening its doors in Old Town Alexandria, providing a bit more chew to the morning meal.

The Chewish Deli, a popular food truck during the covid-19 pandemic with roots in Old Town, has sealed the deal to take over the former Pendleton Carryout space at 807 Pendleton Street. Passers-by may have already spotted the signage out front – and the bustling activity in and out of the shop as owner Gregg Linzey prepares for opening.

“We’re so excited to be back in Old Town,” he said while taking a break from pre-opening work.

The Chewish Deli cultivated its roots as Genuine Water Bagels, a pop-up bagel and pizza shop within then-La Trattoria (now Michael’s Little Italy). The pop-up, which began in November 2018, later moved from the restaurant to a food truck, delivering bagels and their accoutrements throughout the region.

“We had originally wanted to move into a brick-and-mortar, but when we first started the business that wasn’t really in our plan until maybe another year down the road,” Linzey said.

But The Chewish Deli has been truckless for several months due to some needed repairs, and Alexandrians need their bagels. While Linzey has been selling his wares in various cafes around the area as a stopgap, the concept of a brick-and-mortar shop has hastened its timeline a bit.

Linzey reached out to a contact with the Pendleton Carryout Company and learned the building owner was looking for a new tenant. Before too long, The Chewish Deli had its own space. And Linzey couldn’t be happier with the outcome.

“The space already has the permits, it has grandfathered carryout permits, so it was a much easier process than normal,” he said.

And with the pandemic still marching on, Linzey says the carryout nature of the shop is a plus.

“The space is just a great location, it’s a good size, the way that things are going with covid not going anywhere anytime soon,” he said.

Fans of the food truck as well as the deli’s former pop-ups will find much to love about the menu. From favorites to new choices, the options will be robust.

“We definitely will be having our flagship products, (including) our hand-rolled NY style bagels, and continue having breakfast and lunch sandwiches as well as coffee,” Linzey said. “What I’ve always envisioned bringing to Old Town here is more staple Jewish deli items, things that you don’t really see around here.”

Some of those potential additions include matzo ball soup in the fall, rugelach, kugel, and meats and cheese by the pound, he said.

Another something to look forward to: Pizza.

Linzey is aiming for The Chewish Deli to be open by the end of August, with initial hours from 7 a.m. to 2 p.m.