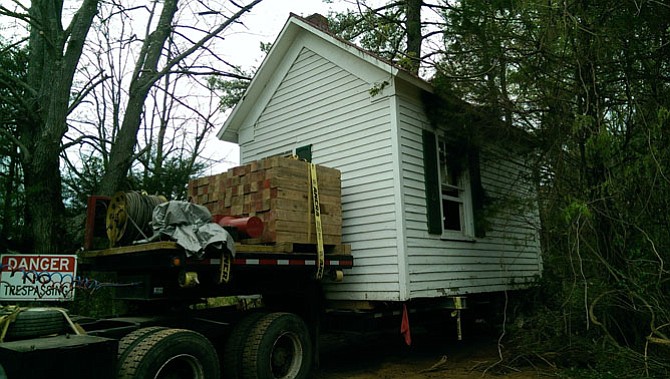 The old post office that stood in the area of Guinea Road and Zion Drive is being relocated to the grounds of the Silas Burke House. Photo by Tim Peterson.

The site plan for a development of 17 single-family homes has been approved and the developer expects to start clear land at the end of April. Efforts to preserve the historical and environmental integrity of the site include the Potomac Chapter of the Virginia Native Plant society moving native plants to the site of a stormwater restoration project that was recently completed, as well as relocating the old post office that stood on the property to the grounds of the Silas Burke House.

The site plan for a development of nine single-family homes should be completed in the next 30 days. Construction should be under way this summer.

Site plan review should be finished soon for renovation that would increase the size of the existing store considerably, up to 58,000 square feet. Construction dates are yet to be determined.

The last of the area’s lakes to be dredged, Royal’s ten acres of dredged material will be more difficult to relocate than Woodglen Lake’s five. The lake will be drawn down over the course of the summer, 2016. Supervisor Cook (R-Braddock) will host an informational “Pardon Our Dust” meeting about the $6 million, year-long project on May 9 at Laurel Ridge Elementary School.

Chick-fil-A is moving into a former bank building near the Burke Kohl’s. The project is currently under site plan review.

All residents of the former state-owned residence and treatment facility for individuals with disabilities were relocated by March 2016, though some were moved to group homes sitting on the site’s 80-acre property. The Commonwealth is in the process of selling the land and is in contract negotiations with the winning corporate offer. Currently, four acres of the land are planned to be held aside for construction of a new Department of Motor Vehicles office that would replace the one currently at Fair Oaks Mall.

The developer Van Metre is working on a subdivision of 12 single-family homes.

Construction is still underway on this ten-home infill project located around Braddock Road and Dequincey Drive. The land had been owned by the Penn family and sits within the Briarwood area.

The plan for a 20,687-square-foot addition to the church with internal, private education facility, on 5.16 acres (zoned R-1) has been approved. Construction is expected to start over the summer.

The rendering from Sunrise shows the existing Silas Burke house on the left, with a concept for the Sunrise community behind the house on the right.

Site plan is under review as Sunrise Senior Living is planning to build an assisted living facility behind the Silas Burke House. At a date yet to be determined, the historic house will be joined on the top of the hill by the old post office from Burke Junction.

Rezoning for Christopher Companies’ planned 12 townhomes at the intersection of Burke Lake Road and Shiplett Boulevard has been approved and the project is now on to a site plan review.

The project began with fish relocation to Lake Accotink in November 2014 and is now nearly complete. The contractor is adding vegetative plugs to the bottom of the lake that will support a new fish population. In late May or June this summer, the Department of Game and Inland Fisheries will begin restocking the lake with fish, the first in a three-year cycle.

A renovation of Cherry Run Elementary School will add 21,000 square feet of space.

Work is just getting underway on a full renovation of the elementary school, adding 21,000 square feet and replacing an outdoor modular of eight classrooms for students with disabilities. The project should take around 20 months to complete and includes upgrades to all spaces, music classrooms, art labs, multi-purpose spaces and spaces for specialists such as counselors that do not currently exist in the school.

The developer is approved to begin clearing land for a three-long subdivision.

A Verizon Wireless tree-pole is tentatively scheduled to be constructed and operational by mid-June 2016.