The Changing Face of Burke
Votes

The Changing Face of Burke 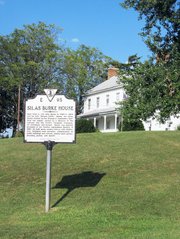 If the Planning Commission accepts the rezoning application of Sunrise Senior Living, the Silas Burke House should be maintained in perpetuity.

Penn’s Crossing Subdivision: Construction is underway on this 10-home infill project located around Braddock Road and Dequincey Drive. The land has long been owned by the Penn family and sits within the Briarwood area.

Woodglen Lake Dredging: This public improvement project is already underway: Fish relocation to Lake Accotink took place in November, 2014. Water will be drawn down in February and March, then dredging will occur later in the spring and continue through summer, and is scheduled to wrap up in October.

Lake Royal Dredging: Royal’s 10 acres of dredged material will be more difficult to relocate than Woodglen’s five acres. As such, county staff are still looking for a site to receive that excess. Design for the dredging is ongoing and the project is scheduled to receive funding July 1, 2016.

Burke Commons Road Sidewalk: As of November, 2014, a new sidewalk along the north side of Burke Commons Road from Meredith Circle to Roberts Parkway is three-quarters of the way done. The project is estimated to be completed by the end of March 2015.

Silas Burke House property: The Fairfax County Planning Commission is set to meet Jan. 29 and discuss the rezoning of this historic property along Burke Lake Road. Sunrise Senior Living is interested in building an assisted living facility behind the Silas Burke House, but requires an amendment to the county’s Comprehensive Plan that would allow for a higher residential density for the area.

Madison Homes development: The developer Madison Homes is working on a subdivision of 12 single family homes on five acres around 6408 Spring Lake Drive. That plan is currently in the site review stage of redevelopment, but could see construction take place in 2015.

Though the new destination grocery-restaurant was previously slated for a late spring opening, Supervisor Jeff McKay (D-Lee) now says to expect an opening in the May-June time frame -- among other reasons, due to the substantial training employees must go through. The 350,000 square-foot facility will be an anchor at Hilltop Village Center (the corner of Telegraph Road and Beulah Street), which will also feature a gym and other retail.

“One thing we've experienced at the Springfield Town Center is its popularity is unbelievable,” said McKay. “And the appetite, especially for restaurants, literally, is so big in that area, that the more we can build and provide services to people closer to where they live, the better.”