McLean: They Serve, Too – Gala Benefits Children of Military Personnel 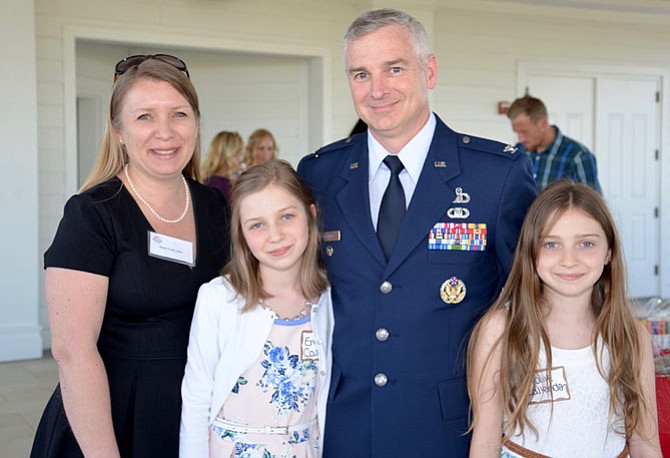 With both mom and dad in the military, the Mullen gang know how to line up and look sharp. Currently stationed at Quantico are Shannen, Nora, Kelly and Maven. Mom Jess just returned from a 6-month deployment in Kuwait, to the delight of all in the Mullen regiment. 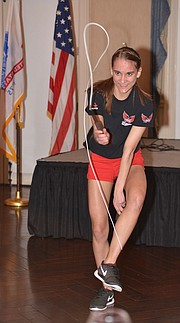 Zuzanna Fernandez, 16, of Woodbridge, honed these blazingly fast rope jumping skills via a grant from Our Military Kids – and impressed the Gala attendees with them. 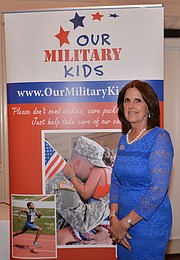 Linda Davidson, co-founder of Our Military Kids. “People don’t realize how many Guards and Reservists are still on duty or have returned home injured, and how many family members still need our help. We’ll keep doing what we can to honor their service and their sacrifice, all of them, because the kids serve, too.”’

When a military parent is deployed, things change for the family left to wait. Sometimes it’s financial, especially for the families of National Guard and Reserve service members. For those families, there is often a loss of income when that mom or dad moves from their civilian job to their military role. To complicate matters, the families of Guard and Reserve personnel usually don’t have access to the same benefits and resources that are available on most military installations. These families aren’t “stationed” in some central location where help may be at hand. Instead, they live all around the country and may have limited, or no access to those support services.

Then there is the emotional toll on the ones left behind, particularly the children, who don’t have the distractions or the maturity that the “single” parent uses to cope. Anxiety, the change in routine, a possible tightening of the family’s financial belt all can have a real negative effect on the child who waits.

OUR MILITARY KIDS recognizes that those children sacrifice, just like every military child, and they do what thay can to fill the gaps in support services and ease the burdens by awarding simple grants that pay for children’s activities and educational assistance.

The nonprofit, headquartered in McLean, was founded in 2004 and started small, helping one single National Guard unit in Winchester, Va. It wasn’t long before they were receiving requests from all around the state, from Maryland and from the District. By 2006 they started serving the children of Guards and Reservists from around the nation, and then expanded again to include the dependents of Wounded Warriors and the Fallen, as well.

On April 20, the organization held its inaugural Gala Benefit at the Army Navy Country Club in Arlington. “It’s fitting that we hold this event during the ‘Month of the Military Child,’” said co-founder Linda Davidson. Davidson explained that Our Military Kids is transitioning from a public-private group to one fully funded by the private sector. “We have never turned down a child, yet,” she declared, “and we don’t want to start now. We need to get more people involved to help these kids.” The colorful “thank you” notes that decorated the tables in the banquet room helped put the attendees in touch with the children being served.

The evening’s entertainment included performances by children who had received Our Military Kids grants and used them to develop skills and talents. Zuzanna Fernandez, a 16-year-old from Woodbridge wowed the crowd with her championship jump-roping prowess. Matthew Mund, whose father, Gunnery Sgt. William Mund was left wheelchair-bound by a relapse from an allergic reaction to an anthrax vaccine during his 20-year military service, showcased his blossoming country western singing talents. The senior Mund told the audience how assistance to family members greatly relieves stress and improves morale among those who serve.

FUNDS were raised by the silent auction of art works by grant recipients and by the spirited live auction of a handmade, antiqued wooden American flag, donated by Flags of Valor, a company owned and operated by combat veterans, many of whom are significantly service disabled. Gen. Peter Pace, USMC (Ret.) and his wife Lynne, who were honored at the Gala for their “service to our nation and commitment to the wellbeing of military families,” won the auction, with a sudden offer five times the amount of the last bid.

“With a staff of only five people, you know that your support is going right to work,” said Katherine Spinney, executive deputy director. To request assistance or to find out how to donate or help, contact Our Military Kids at www.ourmilitarykids.org.

Our Military Kids, Inc., was named a winner of the LIDS Foundation’s 2016 “Tip the Hat Award,” a national grant program executed by the philanthropic arm of leading sports-licensed retailer LIDS Sports Group. They received a $25,000 grant from the Foundation.

Our Military Kids aims to provide tangible support to the children of deployed and severely injured National Guard and Military Reserve members since 2004.

Grant recipients were selected from an open call for entries, then narrowed down to five finalists and placed before an online fan vote that determined the level of grant support each finalist received.