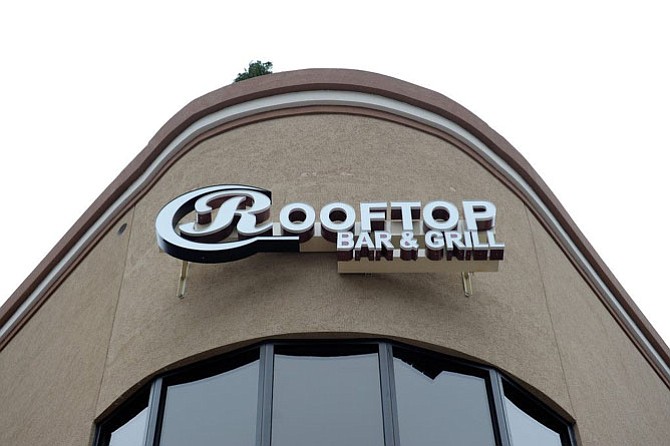 “Last year, some local Floridians approached the bar owners and asked about making it the Gators hangout bar,” said Johnny Graham, one of the managers of the bar. “Then, a few months ago, we were approached by some Buccaneer fans about making it a local NFL hangout. There was nowhere for the Buccaneers to go and we’re not dedicated for any other teams.”

“There’s just something about loving a team and having everyone cheer.”

Throughout the Washington D.C. area, several bars have adopted NFL teams from across the nation. Fans of the Tampa Bay Buccaneers, the Minnesota Vikings or the Pittsburgh Steelers have bars in Arlington to call home on game day.

“We have the Viking’s Fan Club here,” said Mary-Beth Brown, general manager at Sine Irish Pub in Pentagon Row. “It’s very friendly. A lot of people are surprised there’s so many fans, but there’s at least 250 people in the club. Gameday, at the beginning of the season, the restaurant is full of purple jerseys. Seriously, Minnesota fans are some of the friendliest I’ve ever met.”

In many ways, the bars are transformed. Graham said after they agreed to host the Buccaneers, he researched local Tampa Bay foods and drinks. During the games the bar will serve Tarpon Springs salad and serve Cuban sandwiches, both of which were popularized in the Tampa Bay area. Graham also ordered kegs of Cigar City beer, a local brewery in Tampa.

At Tortoise & Hare in Crystal City, the local hangout spot for the the Pittsburgh Steelers fans, bartender Shannon Schraa said the bar stocks the Pittsburgh local favorite beer I.C. Light. On game day, Schraa says it’s incredibly popular, as are the perogies they added to the menu exclusively for their Pittsburgh fans.

“For Steelers game, super crowded,” said Schraa. “You can’t budge in here. Everybody’s here, it’s like a family. They all cheer together and sing the songs together. It’s the same people that come every time.”

Schraa said the fans bring their own traditions with them, like the “terrible towel” fans wave around during the game or songs, like “Black and Yellow” by Wiz Khalifa, that the whole bar sings along to at touchdowns.

It’s that kind of atmosphere that Brent Robson, the Buccaneers fan who helped establish the Arlington Rooftop Bar and Grill as the Buccaneers hangout spot, said he missed most about being in Tampa.

“The last few seasons I would watch at home, but last off-season I decided I wanted to get out more,” said Robson. “I missed that atmosphere. I would go to Tortoise and Hare for Steelers games with my roommate. There’s just something about loving a team and having everyone cheer.”

Robson said he’s prepared for a slow build. Robson said he spoke with the head of the D.C. fan group for the Carolina Panthers, who told him that game days started off with just three people showing up at the bar but it eventually grew from there. Eventually, even the national franchises pay attention. On Nov. 12, the night before the Vikings play the Redskins, several Vikings alumni will be at Sine Irish Pub to host a Q&A with fans.

“Anybody can still come in and watch a game,” said Graham. “But having one team that calls us home? That feels special.”