Taking a Fantasy Flight to the North Pole from Northern Virginia

In spirit of season, community organizations and businesses donate hundreds of service hours and supplies. 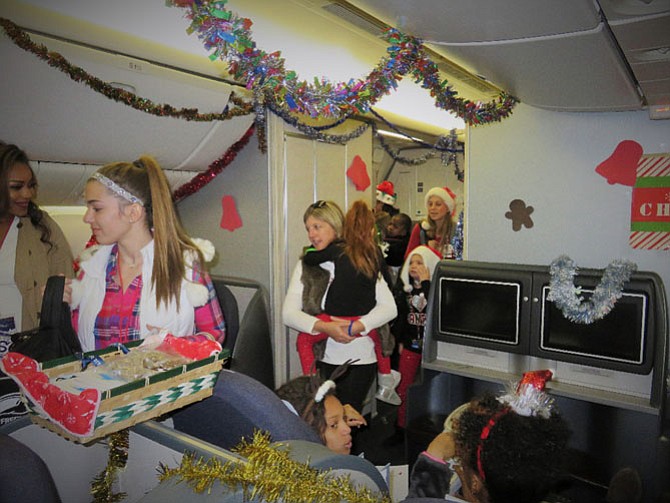 Oak Hill Herndon Fantasy Flight 2016: Children with life-challenging illnesses and their families board Sleigh Ride One, nonstop service to the North Pole, for a day of holiday cheer and a private visit with Santa Clause. United Airlines hosted the day with the support of hundreds of volunteers and regional businesses. Photo by Anthony C. Tsantrizos

Every child who visited the North Pole had the opportunity for a private visit with Santa Claus. United Airlines flew 135 children, many referred by Children's Hospice International located in Alexandria, and their families, doctors, nurses and support crews on a special flight that lifted off from Dulles International Airport early Saturday morning, Dec. 3. 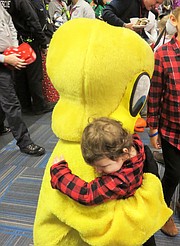 A child at United Airlines Fantasy Flight knows the best gift, of any season, is a welcoming hug.

Montel Flipping and Mrs. Minnesota, Morgan Bredde, enjoy a moment together during festivities sponsored by United Airlines at their Fantasy Flight celebration. Bredde is an Ambassador for Children's Hospice International (CHI), a non-profit organization that partnered with United Airlines. CHI completes the circle of care and improves the quality of life for children with life-altering illnesses.

One hundred twenty-five children with life-challenging illnesses, their families and a support team of doctors, nurses and volunteers, for a total of 216 people, arrived at Gate 7, Terminal D at Dulles International Airport, Dec. 3, and headed for the hottest destination of the season.

Children’s Hospice International, located in Alexandria, in partnership with United Airlines had invited children and their families to experience a special trip. Earlier that morning each person had checked in at the United Airlines counter and received a complimentary ticket aboard Flight 2135, IAD-NTP, non-stop service from Washington to the North Pole, aboard Fantasy Flight 2016, call sign Sleigh Ride One.

They lined up at the boarding gate shortly before 8:30 a.m., awaiting an adventure so many families had anticipated for months. Going down the jet bridge, parents lifted their children out of wheelchairs leaving the chairs behind for the support crew. Others held the hands of their ill child and the hands of their other children as the line moved forward to enter the plane.

The flight crew greeted the passengers as they boarded the plane for their all-expense paid trip to the North Pole and personal visits with Santa Claus.

Sparkling garland hung on the overhead compartments and cut out snowflakes dangled from the ceiling.

HOLIDAY MAGIC, a mix of community spirit and care, fueled this year’s United Airlines Fantasy Flight 2016, a program in its 27th year of operation. Through the support of United Airlines, its partnership with Children’s Hospice International, the giving of dozens of local and regional corporations and hundreds of volunteers including United employees who donated their time and talent, United’s Flight to the North Pole prepared to depart.

Francis Parker and her husband had eagerly anticipated this day since May when the youngest of their four sons, Case, age 2, was diagnosed with cancer. While waiting to board Fantasy Flight 2016, Parker’s boys had crayoned letters to Santa and mailed them with the help from members of Herndon Rotary Club. Paul Williams, Rotarian, said, “It’s a happy time here today, to celebrate with the families.”

As the boys colored, Parker said, “Case is receiving treatment at Walter Reed. His nurses told us about the flight when Case was diagnosed. We woke them up this morning, put them in the car and didn’t tell them where they were going until we got to the airport. Everybody’s been wonderful.” Looking around, she added: “What a great opportunity this is.”

Although Case’s brothers had flown before, this was to be Case’s first flight, as it was for many children aboard Fantasy Flight 2016. While the flight attendants helped the families settle in, United Airline’s Captain “Bubba” welcomed everyone aboard. He explained that there were some very special rules on the nonstop flight to the North Pole.

“Window blinds have to remain down,” he said, adding that the plane uses a very special fuel, making it travel so fast it’ll be extremely bright outside. “And everyone knows, where Santa lives,” Captain Bubba said, “is a secret, only United has clearance from Santa Claus” to land at the North Pole.

The flight is real and so is the destination. Sandy Steinmeyer, a United Airlines flight attendant and key organizer of the Dulles Fantasy Flights said: “All Fantasy Flights across the United States and Guam, a total of 14 flights, will really take off this year.”

Julia Wislocka, United Airlines staff representative corporate communication, commented that there is no doubt in her mind Fantasy Flight is the most amazing event of United Airlines. She said, “It’s a great example of employees and the community coming together. The event, takes hundreds of volunteers, and the concourse where the families will arrive, really is transformed to be the North Pole.”

Terry Edwards, a United employee for 27 years, was Mrs. Santa. Before the plane departed, she agreed and said, “In their mindset, the children are at the North Pole. They buy into it 100 percent.”

While Sleigh Ride One traveled at near warp speed, it made quick time to the North Pole but not before flight attendants could treat everyone to apple slices and sweets. As Fantasy Flight 2016 prepared to land, Captain Bubba came on the intercom one last time. To everyone on board, he wished: “Fill your days with laughter; fill them with peace and with joy. Welcome to the North Pole.”

The children, their families and the support teams deplaned. They headed up the jet bridge to the concourse. There, much to their surprise, with eyes wide open, storybook characters, Minions, Storm Troopers and hundreds of volunteers had formed a gauntlet, and were applauding their arrival. High fives were slapped; children hugged Minions and the Red, White and Blues band played. Even the Racing Presidents of the Washington Nationals stepped up to the children and gave out hugs.

Earlier, Cox described the effort it took to transform the concourse to be the North Pole; “We begin decorating the night before at 6 p.m. It takes 350 volunteers to decorate the North Pole. All the work and the decorations are donated.”

Jim Lynch from Michigan attended the event with his teenage daughter Emily. Lynch said, “Emily completed a weeklong research program at NIH. This is a fun day. And to just walk off that plane, we were blown away.”

Another element of the day is the impact the event has for the siblings of a challenged child. Wislocka said, “Today’s event is so important for the sick kids, but also for their siblings because their parents’ focus has been on the sick child. United Airline employees and our volunteers make sure the siblings get just as much attention and love.”

Xin Huang’s 3-year old daughter, Heidi, attends the Maryland School for the Deaf and Blind. While Heidi rested in her wheelchair, Huang said that this was the second time they had attended the event. She added, “It’s an important family event. Last year, every other month, Heidi’s brother, Leon, would ask about it. He absolutely believes we are at the North Pole.”

DURING THEIR VISIT to the North Pole, guests experienced an entertainment line up of 13 bands; various support groups such as Summit Therapy Animals and Red Door Salon and entertainers like Aerial Graffiti Jugglers, who all donated their time and talents for the cause.

But the event everyone waited for was his or her personal visit with Santa and Mrs. Claus. Each child had an extended time with Santa and received a bag full of age-appropriate toys or items, purchased specifically for that child.

At 21, Montel Flipping was the oldest invitee. He sat in his wheelchair, eyes alert. His mother, Sonja Flipping said, “Montel was diagnosed with pediatric brain cancer at Children’s Hospital. This has been a 4-year journey, and God is awesome.” She added that Montel, her only child, had been accepted into the Police Cadet Program one month prior to his diagnosis. “Where trust is, is what matters most,” she said as they left to get in line for Montel’s visit with Santa.

Ashtin Parker from West Springfield High School and Bryson McDaniels from Lake Braddock High School were two of the gift purchasers for the event. Parker said, “This year we got to buy 800 toys.”

McDaniels added: “We got toys every child would like, from ages newborn to 21. If we can make a difference, we will do this any day.” Both Parker and McDaniels had formed gift and fund drives, Ashtin’s drive was named Ashtin’s Angels and McDaniel’s was Bryson’s Blessings.

McDaniel’s added: “We really put a lot of thought into what to buy, headphones, books, puzzles, then he added: “The headphones are for the 21-year old.”