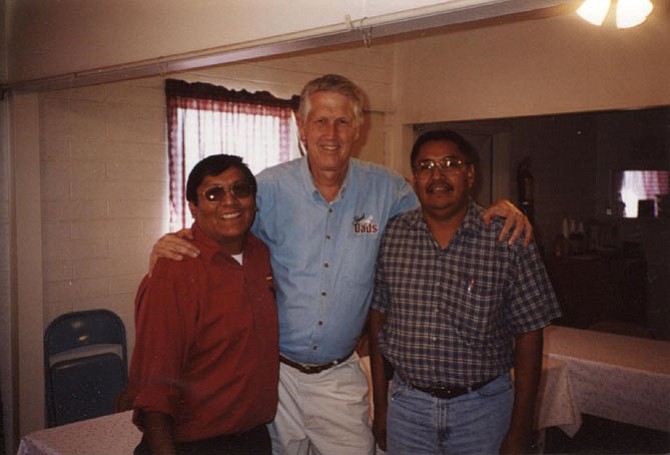 Bob Hamrin of Clifton founded the nonprofit Great Dads in 1996 to help combat the problem of father absenteeism in society. Photo by Tim Peterson.

Virginia — Former Springfield resident Joel Stafford’s life changed on a Saturday. He had planned to attend the Great Dads seminar at Burke Community Church, and then go to work later that afternoon.

Stafford was working “crazy hours,” he said, climbing the corporate ladder. “Coming home going to bed, watching TV, the next morning, get up and do it all again.”

Stafford was also married and had a two-year-old child.

“I wasn’t giving my wife the support she needed, my daughter the attention she needed,” said Stafford. “My family was suffering a little bit.”

But he was involved with the men at the church. One of them, Bob Hamrin, invited him to the first-ever seminar for a father-specific parenting organization he founded. There were between 50 and 60 men in attendance.

Hamrin’s four-hour seminar was an eye-opener for Stafford. He resolved to change his priorities and start spending more time with his family.

“I remember leaving the conference and driving past the exit for my office,” Stafford said, “looking back and seeing my briefcase, thinking about all the things I needed to get done, or thought I did.”

But Stafford passed the exit, drove home and surprised his wife. He announced the family would be going to the zoo, “a nice little daycation.”

“I really changed my pattern of life, my priorities of life,” Stafford said. “From that point on, it was wanting to be a great dad.”

THAT WEEKEND he committed to his wife he would march into his boss’ office Monday morning and explain he would be leaving each day in time to have dinner with his family.

“I really changed my pattern of life, my priorities of life,” Stafford said. “From that point on, it was wanting to be a great dad.”

Stafford’s daughter is now 24 and recently married. For her wedding, he wrote her a poem, a tribute to her.

“I really tried to make memories with her,” Stafford said, “like spending time, doing unique things with her. Being there for her spiritually, being really involved in her life.”

Stafford grew up in a mostly African American community in Cumberland, Md., though he is caucasian himself. He saw a considerable amount of father absenteeism in that community.

“The number one problem in America is the absence of fathers,” he said. “So many fathers that are not doing their job – to me the most earthly relationship is between a father and their child. [If the child] doesn’t have direction, love, support, they go off finding that in other ways.”

Widespread father absenteeism – physical, emotional and spiritual distance – is what motivated Clifton resident Bob Hamrin, who retired from being an economist in Washington, D.C., to write the instructional book “Great Dads” and create a seminar program with the same name.

Hamrin saw the policy work he was spending time on was not having as big or rapid a positive impact on society as he’d hoped.

“I recognized father absenteeism is such huge problem,” he said. “It wreaks havoc, writ large. There are 36 million children suffering from father absence nationally.”

But he also saw the national issue close at hand, “friends, neighbors, royallying blowing it as fathers.”

What he distilled the research down to was six basics of being a great dad, that include specific instructions on showing unconditional love to your child, making time for them and partnering with the child’s mother.

Stafford has received overwhelmingly enthusiastic post-seminar survey results from men of all faiths, atheists and agnostics, men from all walks of life.

Since the founding, Hamrin said Great Dads has reached and trained more than 53,000 fathers in 45 states and ten countries.

At the end of each seminar, the father is asked to sign a comprehensive commitment pledge to their child. One per child. From those fathers, Hamrin said, 133,000 children have received pledges like the one Joel Stafford made.

The vision of Great Dads, Hamrin said, “is to turn the hearts of fathers to their children.”

Hamrin admits the seminar was launched in a church and draws from religious text and doctrine as influences, but that his seminars are not evangelism or an attempt to convert anyone.

In fact, he said, he receives overwhelmingly enthusiastic post-seminar survey results from men of all faiths, atheists and agnostics, men from all walks of life.

Proceeds from book sales, seminars and online training materials go back into the organization, which Hamrin established as a non-profit. Seminars are offered free of charge to inmates and guests at homeless shelters, which the funds support.

“Men in prison,” Hamrin said, “have been impacted by a lousy father in some way, and most are fathers themselves. We recognize the vicious cycle, and try to provide a central hope in their lives.”

Ben Osterhaus’ father Jim was one of Hamrin’s first associates leading Great Dads seminars himself. Three years ago, Hamrin asked Ben to sit on the organization’s board and assist with branding and marketing strategy.

Ben lives in South Riding, Va., while Jim lives in Fairfax Station. In early 2015, at the first local Great Dads seminar Ben was able to attend, he invited his dad to go with him.

He said he most appreciated the strategies for implementing the different basic aspects of being a great dad the seminar covered.

“What it looks like, to not only spend more time with children,” Ben said, “but here’s ways you can do that.”

ANOTHER BIG TAKEAWAY for Ben, who currently has a five-year-old and one-year-old together with his wife, was the importance of being intentional with his children.

“In this life stage, it’s really difficult to focus in,” he said. “Everything feels like a blur, you want to make sure they’re not breakings tuff. So often, I’ll be doing something else, not really focusing in on them.”

Ben thinks dads out there, overall, get the wrong message from television, movies, stereotypes, that portray father figures as passive, not great leaders, or dumb. But the seminar, he said, provides specific tools, ideas and strategies for being a good father and having a healthy relationship with your spouse.

Great Dads celebrated its 20th anniversary Dec. 4. There was a dinner held Nov. 12 at the Burke Community Church to commemorate the occasion.

For Ben Osterhaus, the global success of Great Dads comes back to Bob Hamrin’s passion for the project.

“You get a room with men that vary in age, family size, and talk with them at tables, about life experiences, struggles, strategies, personally even.” Ben said. “The fact that he’s so dedicated and motivated to keep it moving forward, has just been amazing to see.”