2017 Color of the Year: Greenery
Votes 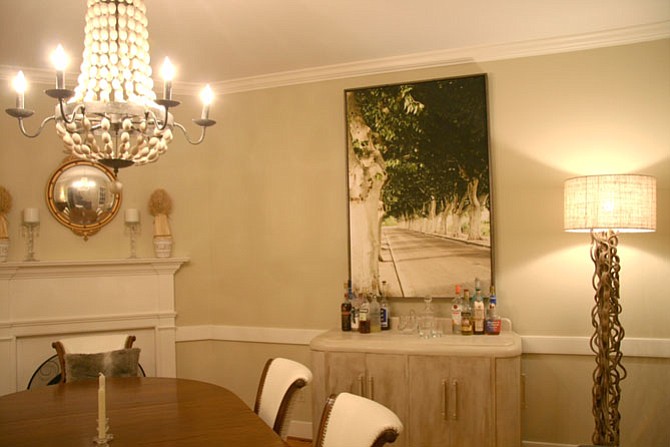 Shades of green foliage found in a painting that hung in a client’s dining room was the creative inspiration of interior designer Anne M. Walker. Photo by Anne Walker 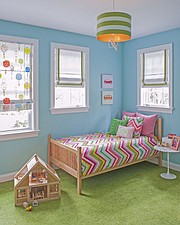 Green as used an a accent color in the child’s bedroom by Annie Elliott Interior/Bossy Color. 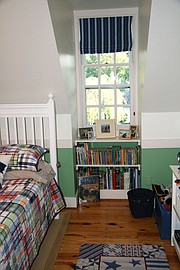 The two-tone walls provide a preppy, fun backdrop for a strong palette of primary colors in the furnishings and fabrics in this bedroom by interior designer Anne Walker.

When interior designer Annie Elliott’s home office began to feel lackluster, she draped the windows with green Roman shades to infuse a burst of color into the muted space. And after McLean-based designer Joseph Van Goethem decided that the time-worn décor of his kitchen and breakfast room needed brightening, he swathed the walls with textured grass-green wallpaper, evoking a serene sense that one is sitting in nature.

"It invites … [and] rejuvenates as should the heart of any home,” said Van Goethem of Joseph Van Goethem Interior Design.

“Greens will bring serenity to a room the way few other colors will, and they are incredibly versatile.” — Anne M. Walker, Owner and Principal, Anne Walker Design LLC

“As an accent color, [green] adds a burst of cheer and optimism to drab spaces,” agreed Elliott, principal of Annie Elliott Interior/Bossy Color, whose green Roman shades offset white and yellow walls and light gray rug. “It's the bright spot in a lovely, calm space,” she said.

They’re in good company. Pantone Color Institute, which calls itself the global authority on color, selected Greenery as the Color of the Year for 2017. Each year, it makes a prediction about the color that will be on trend for the upcoming year.

During the process, which takes about nine months, color gurus at Pantone trot the globe, observing the trends in industries ranging from film and entertainment to art and fashion. The selection, which is less formulaic and more instinctive, is touted as a harbinger of a shade that will be ubiquitous during year ahead and an expression of moods and attitudes world-wide.

In announcing the color selection, Leatrice Eiseman, executive director of the Pantone Color Institute, described it as “satisfying our growing desire to … revitalize and unite. [It] symbolizes the reconnection we seek with nature, one another and a larger purpose.”

Locally, some designers agree that Greenery can create a sense of hope. “2016 will go down as one of the most politically unpredictable in history,” said Elliott. “We need a fresh start. Green is the color of renewal, growth and change. ... We're ready to focus on the future, and that’s what green is all about.”

Designers who’ve already been using the color aren’t surprised by its selection, crediting its year-round versatility. “In summer, with white dishes and bright linens, [a] room feels vibrant,” said Anne M. Walker, owner and principal, Anne Walker Design LLC in Potomac, Md. “In winter, with reds and dark greenery, the room feels festive. When you think of it, green is paired with just about every other color in nature, which is exactly why it works so well inside, too.”

Van Goethem believes that the hue works best with other rustic shades. It’s most often found in paint and textiles. For example, the wall covering he selected for his kitchen and breakfast room is a hand-crafted and hand-painted fabric called, “Un Nid de Verdure” or “Nest of Greenery” from French manufacturer, Elitis.

“Greenery is highly personal to my wife and me as…[I]t is incorporated as an integral element in the design of our home,” said Van Goethem, who not only designed his kitchen, but did most of the work himself. “I complemented [the wall covering] with a palette of deep, rich wood tones, blues, some red, other hues of green and neutrals.”

Praising the choice of Greenery as a fresh tactic for breathing whimsy into a muted space, Victor Sanz, project architect at DMG Interiors in Reston, calls the new color of the year energetic, vibrant and fresh. “Although its use as the dominant color might not be suitable for more conservative designs, this color can be used as a fun contrast, especially if used in modern fabric patterns or wall coverings,” he said.

“I kept mixing until I got a soft, earthy green, which is the perfect backdrop for the artwork,” she said. “Greens will bring serenity to a room the way few other colors will, and they are incredibly versatile.”

Open spaces in interior and exterior design and floor-to-ceiling windows allow the green outdoors to become part of a room’s backdrop and ambiance. “Green is a fantastic color for interiors,” said Walker. “It’s such a chameleon — it can create a feeling of fresh, high energy or make a room feel like a peaceful outdoor sanctuary.

“Many people say you shouldn’t use green in a dining room because it isn't flattering to skin tones and it isn't a stimulant to appetite,” she continued. “Au contraire — this elegant, soft green really comes alive in the glow of candlelight.”

Greenery, say designers, has the power to deliver a burst of color, with the added benefit of creating the illusion of nature indoors. “Hooray for green,” said Walker. “Now, more than ever, we all need to take a deep breath, oxygenate and reinvigorate.”