Nine, Not 10, Houses Approved for Hills Nursery in Great Falls 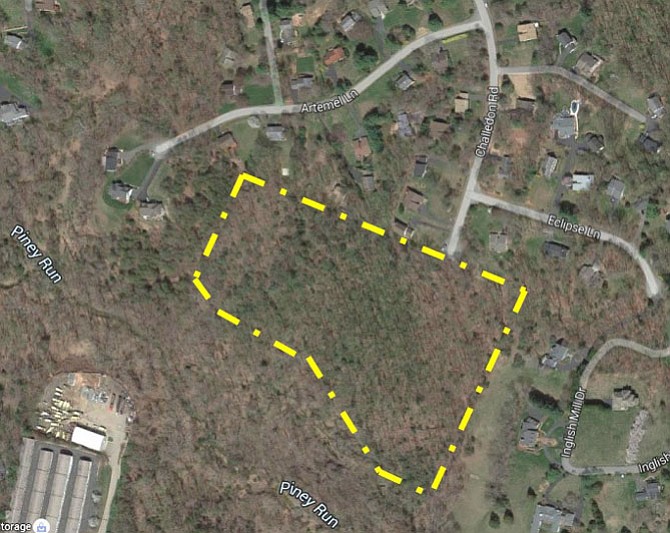 Gulick Group Builders and Great Falls advocates helped reduce the development of 11 acres of the former Hills Nursery from 10 to nine houses, as well as ensuring preservation of trees, water quality, and sediment and erosion control. Photo Contributed

The Gulick Group, Inc. originally requested to rezone and develop 11 acres of forested land at the north end of the former Hills Nursery site into 10 homes.

“The revised plan increases the tree preservation and tree canopy square footages, which were already significant, well beyond what is required.” — Dranesville Planning Commissioner John Ulfelder

“It is a good example of what can be accomplished by clustering a development to retain important features and further environmental protection while not increasing the overall lot yield,” said Dranesville District Planning Commissioner John Ulfelder

For more than a half year, the Great Falls Citizens Association and Lexington Estates homeowners advocated for enhanced stormwater management, preservation for trees in the Piney Run floodplain and sediment and erosion control.

“Overall, it allows for further improvement in both water quantity and quality for the proposed site,” said Dranesville Planning Commissioner John Ulfelder.

The Board of Supervisors is scheduled to make its decision on Jan. 24, 2017.

“This change results in a decrease in impervious surface, both by the reduction of one proposed house as well as the reduction in the proposed extension of Challedon Road,” he said. “It allows for the preservation and permanent protection of a number of trees along the northern lot line adjacent to the Lexington Estates subdivision.”

THE GULICK GROUP had originally applied to rezone the 11-acre property at the “terminus of Challedon Road” to permit development of a 10-lot cluster single family subdivision at a density of 0.91 dwelling units per acre. The forested, 11-acre parcel is composed of moderate slopes that steepen towards the Piney Run floodplain.

Arthur Kingdom testified before the commission in June, calling the property idyllic. He described for planning commissioners sunlight shining through hundreds of trees on Challedon Drive, and the birds singing at sunrise.

Kingdom said the land with steep slopes is not suitable for development because stormwater would run down the slopes to a floodplain, then to a creek that runs to the Potomac River, and then into the Chesapeake Bay.

GFCA formed a stormwater task force, in response to Dranesville land use cases in 2015 and 2016.

“The applicants have met with Great Falls Citizen Association, the neighbors, the Dranesville District member of the County Tree Commission, County staff, myself, and others.

“The revised plan increases the tree preservation and tree canopy square footages, which were already significant, well beyond what is required. Similarly, the proposed stormwater measures will remain the same and with the overall reduction in impervious surfaces, plus further tree preservation, will further improve reduction in water quantity, as well as quality, well beyond what is currently required,” said Ulfelder.

He reported that the Gulick Group is also committed to the installation of alternative septic systems that “require more attention and care” but “significantly reduce potential impact of residential sewage on the environment.” And, during construction, Gulick Group will also use “super silt fencing” along clearing and grading to “maximize erosion and sediment control during the construction phase of the proposed subdivision.”

The decision had been deferred at least five times since June to allow all parties the opportunity to meet consensus on the application.

“We’ve been through a number of revisions and every time there is a revision a fire bell rings and everybody runs around and has to review something, to write something,” said Ulfelder. “And we've done that a number of times with this application.”

“I would like to thank [planning] staff for hanging in there,” he said.