Great Falls: Time to Get Involved

Great Falls Citizens Association encourages members to get involved in its stormwater management task force, especially as it pertains to land use cases. 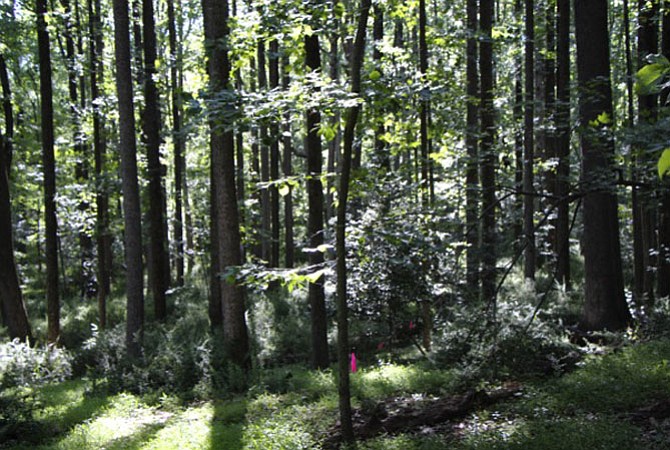 Stormwater runoff of any development is a major concern to residents who live along Walker Road. Ironically, said Sandy Cappiello, after a community meeting on the proposed redevelopment in the spring, attendees watched emergency personnel with rafts helping stranded motorists.

Dranesville Planning Commissioner John Ulfelder announced last Thursday that a decision on The Gulick’s Group application to develop 11 acres of undeveloped, forested land would be deferred until September.

The Gulick Group applied to rezone the 11-acre property at the “terminus of Challedon Road” from R-A to R-1 in order to permit development of a 10-lot cluster single family subdivision at a density of 0.91 dwelling units per acre. The area is currently undeveloped, forested, 11-acre parcel that is composed of moderate slopes that steepen towards the Piney Run floodplain.

“They will be clear cutting about seven acres,” said Vickers, at a Town meeting held by Great Falls Citizens Association on Monday, July 18, attended by more than 50 members.

GFCA member Sam Cappiello told members of the GFCA that he has hired his own private arborist to conduct a study of the trees he believes will be removed by the Gulick Group application.

Cappiello told GFCA’s membership that he asked Ulfelder, a Great Falls resident, if the Planning Commission vote can be delayed until he has time to give the county his findings.

THE PROPERTY is part of Lexington Estates.

Arthur Kingdom testified before the commission to describe sunlight shining through hundreds of trees on Challedon Drive, and the birds singing at sunrise.

“It is idyllic,” he told the Fairfax County Planning Board Commission during the public hearing on June 29.

Kingdom said Lexington Estates was built in 1978 and that there has been talk about development for a number of years.

He said the land with steep slopes is not suitable for development because stormwater would run down the slopes to a floodplain, then to a creek that runs to the Potomac River, and then into the Chesapeake Bay.

“I have thought long and hard about whether I oppose this development because I love the forest next to my house, or whether I am concerned about the environment,” he said. “I can unequivocally say that it is more of the latter. To me, it is just common sense that it is not possible to move forward on this development without a great deal of permanent damage to the ecosystem and the watershed.”

He encouraged membership to get involved.

“We’ve got to figure this out. We need dedicated people to join this organization and our storm water management task force,” said Eric Knudsen, past president of GFCA.