Fairfax: ‘Just Pause and Don’t Do It’
Votes

Fairfax: ‘Just Pause and Don’t Do It’ 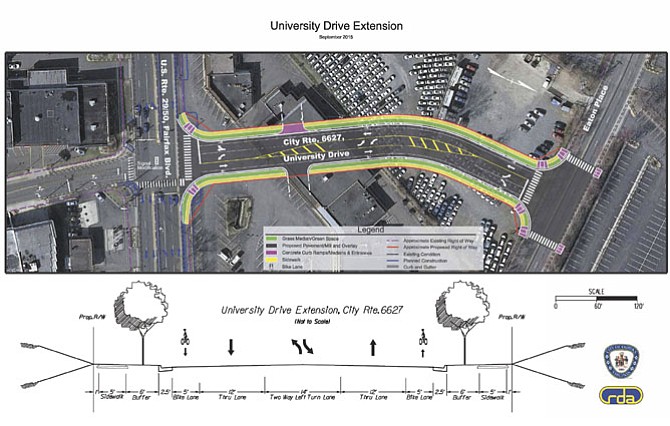 Fairfax — The City’s proposal to extend University Drive has sparked strong feelings in Fairfax residents. They spoke both for and against it at the Nov. 1 community outreach meeting and before the Nov. 8 City Council meeting. But most of the speakers during Tuesday night’s public hearing were firmly opposed.

Another view of the proposed road alignment at 10 percent of the design work.

“It will have an adverse effect on the University Drive neighborhood,” said Diane Henn. “It will turn our neighborhood street into a highway and a shortcut for north-south commuters.”

“University is a narrow, residential road, and this extension would endanger people’s lives,” said Robert Orr. “People cross University to get to Van Dyke Park or the Sherwood Center, all the time.” Matt Baird said the extra traffic would drive down their property values, and he also worried about the children playing along University and people walking their dogs there.

In November, University Drive resident Bob Kemp said traffic’s already increased in that area. “I estimate an accident happens there once a month,” he said. “People blow through the stop sign in my section of the road, so there’s a safety concern. And this will bring even more traffic. Many homeowners have several cars which have to be parked on the street and will be hit.”

However, neighbor Betsy Bicknell favored the extension. “I’d love an alternative route to head north on [Route] 123,” she said. “I support this to encourage better redevelopment in the Fairfax Shopping Center to increase our tax base.”

“University is a narrow, residential road, and this extension would endanger people’s lives,” said Robert Orr. “People cross University to get to Van Dyke Park or the Sherwood Center, all the time.”

Tom Ross wanted it for economic reasons “so the homeowners don’t have to pay higher property taxes or receive reduced City services. This roadway is critical to ensuring Northfax’s future success to provide the type of economic development the City desperately needs. There’d be cut-through traffic, but ways to minimize it and slow it down.”

Yet noting the other redevelopment projects already happening in the City, Chris Dominic said 1,500 more cars on University Drive would be a huge impact. And Audrey Sandhusen was “deeply concerned about the gridlock that already occurs at University Drive and Fairfax Boulevard, especially at rush hour. I can’t see putting a main road through that shopping center and moving where the gridlock occurs.”

Agreeing, Virginia Gerard said, “People can’t get through Eaton [Place] now to get to 123 at rush hour. You can’t turn left at Fairfax Boulevard and University; and half the time, you can’t turn left onto [Route] 50 to get to University Drive, so you’ll have traffic backing up. It’s going to be worse than it is now at some of those intersections.”

Kelly Schultz said the project will yield more cars on Fairfax Boulevard, University and Eaton and “there’d be delays on Eaton. The costs would outweigh the very limited benefits.” And former City Mayor John Mason urged the Council not to make a hasty decision “until a workable plan is in place.”

University Drive resident Karen Vincent said that road is their neighborhood drive. “There’s speeding and no place to park,” she said. “Some mornings, it takes three minutes to get out of my driveway, and it’s backed up past the stop sign. I don’t see how this [extension] benefits the residents.”

Former City Councilwoman Nancy Loftus called the extension unnecessary and objected to the $7.5 million right-of-way cost “to put in a road that may or may not bring the development we want.” She also preferred the shopping-center developer build the road, himself.

Tom Ross wanted it for economic reasons “so the homeowners don’t have to pay higher property taxes or receive reduced City services. This roadway is critical to ensuring Northfax’s future success to provide the type of economic development the City desperately needs. There’d be cut-through traffic, but ways to minimize it and slow it down.”

Robert McFerry feared the extension would send cut-through traffic down the nearby neighborhoods. And Jim Worthing said additional traffic on University “will make things worse at the Eaton/Route 123 intersection – and it’s already unsafe there.”

Amy Anspach, who gathered 231 signatures on a petition opposing the project, said the renderings show parking on both sides of the road, “But there’s not space for it. And the kids who use the crosswalk and go by foot and bike to school should be the number-one concern. Cars speed and go through traffic lights there on a regular basis, and this will bring a significant amount of traffic onto our street.”

Furthermore, she said, “The project cost is enormous, and putting a street through an area doesn’t make it more walkable. We should remove this extension so the shopping center can develop a better project. Putting in a road with heavy traffic isn’t good for biking, and a roundabout isn’t, either.”

Anspach said the pre-2014 average accident rate there was four per year, but the 2014 increase in traffic volume tripled that number. “If all evidence shows a negative impact to area traffic [from the extension], then how can this qualify for Smart Scale funding which is intended for road improvement?” she asked. “And traffic turning into shopping centers from the extension will also contribute to gridlock.”

She also wondered how much it would cost the City to improve the Route 123/Eaton intersection resulting from the cut-through. Besides, added Anspach, “If the area is intended to be highly walkable, parking access off Eaton and Route 50 should be sufficient to provide mobility by foot. Improving mobility by car seems contrary to the objective of a walkable center.”

Nancy Young said the University/Ford Road intersection has a three-way stop that drivers ignore. “I walk my dog into the park daily and children cross there to get to the park and schools,” she said. “And people already go through the stop sign there; it’s very dangerous.”

Meanwhile, representing Fairfax City Citizens for Smarter Growth, Douglas Stewart urged the City to proceed with the project. “[It] has significant benefits for smart growth, traffic circulation and economic development in Fairfax City,” he said. “The University Drive extension is central to the creation of a street grid for Northfax … and more compact, walkable blocks [there].”

Stewart called receiving Smart Scale funding for this project, with no local matching funds required, a “victory” for the City. “There’s a great need for infrastructure improvements and a scarcity of available funds,” he said. “To cancel the project and return these funds would be, in our view, fiscally irresponsible. We’re also concerned about the message this would send to the state and whether it could negatively affect the City’s ability to compete for future transportation funds.”

But most of Tuesday night’s speakers said the project wasn’t worth doing. “It’ll be difficult crossing a two-lane road,” said Al Goring. “And a 25-30-percent increase in traffic isn’t insignificant.” Rob Higginbotham said University shouldn’t be a cut-through to Eaton and I-66, and Council should eliminate the plan’s road connection to Eaton.

Nancy Young said the University/Ford Road intersection has a three-way stop that drivers ignore. “I walk my dog into the park daily and children cross there to get to the park and schools,” she said. “And people already go through the stop sign there; it’s very dangerous.”

To prevent cut-through traffic, said Alan Souder, “Think only right turns entering and exiting [the shopping center]. This [proposal] is premature and not ready for primetime.” And Hal Creel said working with the community first, devising a plan and then seeking funding would have been better.

Agreeing, Nancy Wylie told the Council, “You’re voting on this extension to promote the shopping center, but I haven’t heard the plan for that center. And what are the benefits in extending this road? What I’ve heard tonight is ‘danger,’ so just pause and don’t do it.”