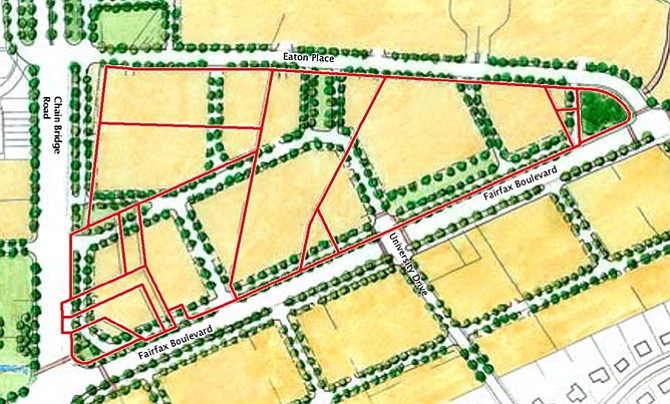 This proposed grid network for Northfax may or may not be needed.

Fairfax — During November and December, Fairfax City Council held work sessions and community-outreach meetings on the proposed extension of University Drive from Fairfax Boulevard to Eaton Place. The goal was to glean as much information as possible about this project, explain it to the residents and obtain their input.

This roadway extension is recommended in the City’s Comprehensive Plan as part of an expanded roadway grid to provide more travel routes and better connectivity within the Northfax area. And the City has already received nearly $10 million for its construction via federal, Smart Scale funding.

The work would include new sidewalks, on-road bike lanes, lighting, landscaping and the reconstruction of the traffic signal at the intersection of University Drive and Fairfax Boulevard. And at Tuesday night’s (Dec. 13) public hearing, City Council was to vote whether to proceed with this project’s preliminary engineering.

Instead, after 29 residents – the vast majority in opposition – spoke about it, the Council decided it needed more time to consider the community’s comments, see if a grid network in Northfax is really needed and obtain more information about its options.

IT THEN DEFERRED further discussion until Jan. 24. And that date’s significant because three of the Council members – David Meyer, Michael DeMarco and Ellie Schmidt – are running for mayor in the Feb. 7 special election. So their actions concerning this issue could well have an impact on the outcome.

“Is the grid network there still relevant, and do we need the intensity of roads there?” asked Councilman Jeff Greenfield. “I don’t support an extension of University Drive that allows more cars going south on University.”

“We need to sift through the information we’ve received [from the community] and review it,” added Councilwoman Janice Miller. “We need additional information before we decide to accept this grant.”

“We need to sift through the information we’ve received [from the community] and review it,” added Councilwoman Janice Miller. “We need additional information before we decide to accept this grant.”

During the Nov. 1 meeting, Community Development and Planning Director Brooke Hardin said Northfax currently has no internal streets, so all vehicle trips there happen on Chain Bridge Road, Eaton Place or Fairfax Boulevard. “There are about 700,000 square feet of office space, 282 hotel rooms and 1.5 million square feet of commercial space in this area – and all that traffic relies on three roads.”

He said the road extension would be two lanes, with turn lanes on each side leading to Eaton and Fairfax Boulevard. And there could either be a median or a roundabout centrally located between those two streets.

The planned roadway alignment would travel through part of the existing Fairfax Shopping Center and car dealership, so $7.5 million of the project total would be for right-of-way acquisition from two, private property owners. And once the City signs a project agreement with VDOT, the state will reimburse all further design costs.

According to a September traffic study, on northbound University Drive at Fairfax Boulevard, all the turn movements would see additional vehicle queuing, but the only significant increase would be for right turns in the afternoon rush.

According to a September traffic study, on northbound University Drive at Fairfax Boulevard, all the turn movements would see additional vehicle queuing, but the only significant increase would be for right turns in the afternoon rush.

To address safety issues on University Drive, the City has already installed advance-warning signs at both ends of the crosswalk, mid-crosswalk signs on University and a new stop sign on southbound University at Stratford Avenue. And staff further proposes constructing the missing sidewalk link on the west side of University between Stratford and Wood Road and building bump outs – to make pedestrians more visible to drivers – at the University/Ford Road intersection.

During the Nov. 8 work session, Councilman David Meyer called the way University intersects with Eaton “problematic. We don’t want to do something that makes traffic worse. I’d be hard-pressed to give an affirmative vote to move forward with this project because the overall approach to the Northfax site hasn’t yet been decided.”

Councilwoman Ellie Schmidt asked if on-street parking could go on the new stretch of University. “Possibly, if the roundabout’s not there,” replied Transportation Director Wendy Block Sanford. “And it can’t be near the intersections with Eaton Place and Fairfax Boulevard.”

“I’m in favor of an internal roadway network at Northfax, but I’m not sure this is the right road for it,” said Schmidt. “I’m concerned about the amount of traffic it would create.”

Councilwoman Ellie Schmidt said “I’m in favor of an internal roadway network at Northfax, but I’m not sure this is the right road for it,” said Schmidt. “I’m concerned about the amount of traffic it would create.”

Councilman Michael DeMarco said it’s important to have access to that site from both University and Eaton. And, he added, “I like on-street parking for University to reduce its speed. And unless we’re willing to commit some money to building the road connection, the development’s not going to come.”

Mayor Steve Stombres said Whole Foods 365 – a smaller, new concept of this store – is considering locating in the shopping center. “It’s a coup for the City to attract such a reputable, national chain,” he said. “That type of tenant would be the catalyst for what we want to have in this community – and something that would attract millennials. If we say no, we may get something worse than is there now.”

Councilwoman Janice Miller asked if the City could re-apply for the Smart Scale funding for this project in the future, if it cancelled it now, and Sanford said probably not. But Tuesday night, she said it could.

DURING THE DEC. 6 work session, Councilman Jon Stehle noted that Fairfax applied for the Smart Scale funds to start moving forward with a road grid system. “And if we walk away from the $10 million we received, we won’t get it back,” he said. “So we should find a way to make this work.”

“If we didn’t go forward, could we use these funds for another project?” asked Schmidt.

“No; the funds would go back into the Smart Scale funding pool,” replied Sanford. “The City has spent about $30,000 on this project so far. At the 30-percent design stage, we’d have to submit our plans, and then VDOT will give us more specific input.”

By the 60-percent design stage, added Public Works Director David Summers, some $200,000 will have been spent. At that point, Council would hold a design public hearing and authorize the project’s completion. But if it then backed out, the City would have to reimburse VDOT for all the expended federal funds.