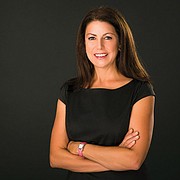 Reston Association Board Director Dannielle LaRosa, who represents the North Point District, gave her notice of resignation on Dec. 15. LaRosa, who also holds the position of treasurer, said her resignation is effective April 11, 2017.

“I’m very sad and disappointed to have to step down at this point, but it’s definitely the right decision for myself and north Reston,” says LaRosa, who joined the board in July 2014. “It’s just due to family commitments. I have three children still at home. I have four children total.”

LaRosa also said that the need for full attention on the St. John's Wood development project, and the associated Design Review Board and Planning & Zoning meetings helped solidify her decision.

“Whoever is my replacement, it’s going to be very important that they attend all of the DRB and the P&Z meetings in addition to all of the regular RA board responsibilities,” she says.

“I care so much about north Reston, but I really feel like we need somebody here who can attend all of these meetings because all of the meetings are at night,” she says.

The last RA Board of Director meeting lasted from 6:30 p.m. until midnight. The board then went into executive session.

LaRosa said she has about five years left with her kids at home and wants to be there when they get home from school. But she is holding out for the upcoming 2017 election.

“I chose April because I wanted to make sure that my replacement went through the regular election cycle,” LaRosa says.

LaRosa’s departure from the nine-member board means that four seats will be open. The person elected to fill the North Point seat will serve out LaRosa’s term, which runs until April 2019. The other seats open in the upcoming election include Hunters Woods/Dogwood District, an at-large position and the apartment owner’s representative. The terms for those three seats run through April 2020.

RA members will be able to vote for candidates running for the open seats from March 6 to April 3, 2017.