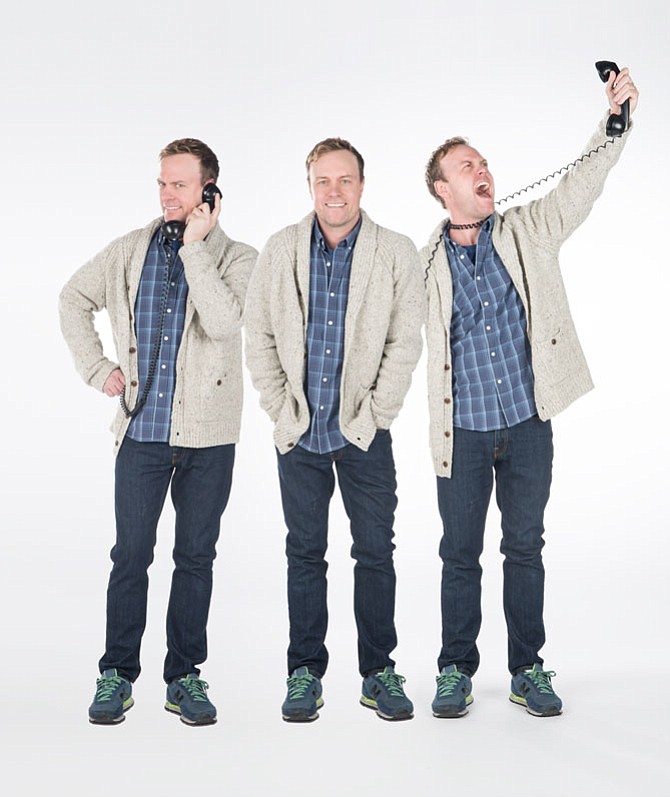 MetroStage in Alexandria is staging the newly revised version of "Fully Committed" (following the successful Broadway run that closed in July) through Jan. 8, 2017. Tom Story plays a restaurant reservationist named Sam at a trendy and posh New York restaurant who channels the role of 40 characters as he answers phones and portrays the personalities of the people on the line who desperately want a seat. Prestige, power, desperation and boundless egos are all on display in this one-person comedy show. This is something new and fresh at MetroStage to replace "A Broadway Christmas Carol," which played for six years previously during the holiday season. "Fully Committed" is not full-out holiday fare, but there is a slight holiday theme to it.

Story plays an out-of-work actor trying to get his next acting gig, who endures the pressure and chaos of his day job by answering phones and taking dinner reservations for the rudest and most demanding of well-heeled New Yorkers. But there's hope toward the end that Story will be cast in an acting role to escape his day job, and maybe get home for Christmas.

“It is exciting for MetroStage to be producing 'Fully Committed' using the newly revised Broadway script," said Carolyn Griffin, producing artistic director of MetroStage. "We have Tom Story, one of Washington, D.C.’s actors, and Alan Paul, a Helen Hayes Award winning director, here at MetroStage for our holiday show. We have even had the playwright Becky Mode come down from New York to see this production and participate in a talkback with Tom and Alan. It is always a treat for an audience to hear some of the backstage scoop after seeing a show."

She continued: "At MetroStage we are always pleased to present such talent on our stage and share this level of artistry with our neighbors. Nationally recognized artists in your own backyard! We certainly hope that Alexandrians join our neighbors around the Beltway this holiday season and come to see an acclaimed play that will entertain you all the while touching your heart with a little holiday spirit.”

Paul (associate artistic director at the Shakespeare Theatre), has directed "Kiss Me Kate," "Man of La Mancha," "A Funny Thing Happened on the Way to the Forum," "The Boys from Syracuse," revivals of "Twelfth Night," and "The Winter's Tale," and numerous readings, workshops and special events. Outside STC, Paul's work has ranged from Shakespeare to musical theater to opera. Recent highlights include "Silence! The Musical" at Studio Theatre 2nd Stage, "The Rocky Horror Show" at Studio Theatre 2nd Stage, "The Matchmaker" at the University of Maryland, "Fire and Air" at The Kennedy Center, and "I am My Own Wife" at Signature Theatre.

Story makes his MetroStage debut after appearing as Prior Walter in Round House/Olney's production of "Angels in America." He is an affiliated artist at The Shakespeare Theatre where credits include "The Winter's Tale," "The Government Inspector," "The Merry Wives of Windsor," "Cymbeline," "Twelfth Night," "Richard II," "Henry V," "Design for Living," "Major Barbara," "The Rivals," and "Measure for Measure," among other roles. He has also appeared in Synetic Theater's "Three Men in a Boat," Arena Stage's "The Book Club Play," and "Oliver;" Ford Theatre's "Our Town," "Sabrina Fair;" "A Christmas Carol;" "1776," and "The Glass Menagerie," among others.

Performances are Wednesdays, Thursdays and Fridays at 8 p.m.; Saturdays at 3 p.m. and 8 p.m.; and Sundays at 3 p.m. and 7 p.m. (with some exceptions including Tuesday performance Dec. 27 and Saturday twilight shows on Dec. 24 and 31 at 5 p.m. Tickets are $55 to $60 with student and active military discounts available. For reservations, call the theater at 703-548-9044 or visit www.metrostage.org. For group sales, call 703-548-9044 or email info@metrostage.org. The venue is located at 1201 North Royal Street in North Old Town, Alexandria.