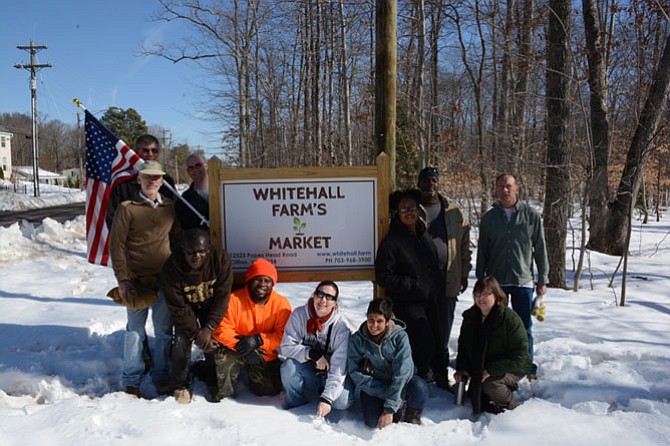 During their first of 12 weekends of training, members of the Arcadia Farm veterans farmers training program visited Whitehall Farm in Clifton on Jan. 31. Photo by Tim Peterson. 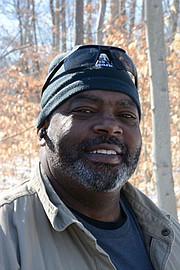 Clifton Hoffler of Greenbelt, Md. is one of the first participants in the Arcadia Farm Veteran Farmers Program and plans to start a farm that will both supply an adjoining cafe and serve to educate children from low-income areas of Baltimore about healthy eating.

Clifton Hoffler is embarking on his third career. A resident of the Greenbelt, Md. area, Hoffler spent 21 years in the U.S. Army, serving in Iraq twice, before transitioning into government sales. In 16 months, he will be a certified culinary chef.

Now, he said, “I’m doing what I love.” Hoffler has been on a healthy cooking regimen for the past two years and dreams of starting his own farm in Maryland, supplying an adjoining cafe that he’ll own, and then providing a healthy eating education to children in areas of poverty in Baltimore.

“I’m in the part of my life now where my drive is to give back, to be a better servant,” Hoffler said. “I want to show a person they still have alternatives to get decent, quality food; then have more money to pay for for things like medical bills, and can prevent childhood obesity.”

Hoffler grew up around farming in North Carolina. Now he is bringing it full circle and receiving training as part of the first class of 12 veteran farmers-to-be, a year-long program run through the Arcadia Center for Sustainable Food and Agriculture based with a farm at Woodlawn Plantation in Mount Vernon.

THE DOZEN TRAINEES spent their first of 12 weekends in training touring the farm at Woodlawn, learning about off-season planting planning and cleaning and sharpening various farm tools, and touring family-owned Whitehall Farm in Clifton.

“What I was struck by was we didn’t try to achieve any kind of mix of ages, races or cultures, but what we got was really rich mix of people,” said Pam Hess, executive director for Arcadia Center for Sustainable Food and Agriculture.

Hess gave several examples of the veterans’ goals, including one man from Ghana who grew up in a farming family and whose parents pushed him into business. He became an American citizen, served in the U.S. military and now wants to get back to what he grew up always wanting to do: farm.

Another female vet wants to receive training and then go back to her native Ohio and re-establish public school gardens like the ones she grew up with.

“I was gobsmacked with how different everyone is, but how focused they all are,” Hess said. “They’re all new to us, strangers to us. But we’ve created a program that’s really filling a need. It was incredible to me.”

Arcadia Farm Manager Anita Adalja of Washington, D.C. said her biggest takeaway from the weekend is also the diversity of interests and passions in the group, under the farming career umbrella. “We have folks who are interested in diversified vegetable farming, hops growing and metalsmithing, livestock and urban farming, and food access projects,” she said.

“The variety is absolutely incredible and makes for a dynamic program with folks bringing so many different life experiences and skill sets to the table,” added Adalja. “Their questions blew me away -- these are individuals who are committed to shaping our food system in a way that is sustainable, and are throwing themselves into it because they believe in their calling.”

Laron Murrell of Woodbridge, an 11-year veteran of the U.S. Army and Army Reserves, was the first fellow who joined the program in fall 2015. He plans to eventually return to 55 acres of his family’s land in Dover, N.C. and begin a vegetable farm.

Hess said Murrell recently visited Dover and checked out the property again. “He said he saw the place with new eyes,” after his first few months with Arcadia. “He understood how important it is that he gets back there and does what he plans to do.”

Murrell, Hoffler and the rest of the trainees had numerous questions at Whitehall Farm for owner Jeff Waters of Fairfax and his head grower Brian Yoder of Reston. While in the farm’s market, Hoffler asked for advice about sourcing local produce and meat while keeping costs down, as well as software and hardware for handling point of sale.

“We can’t hire a bunch of vets, but we can help these guys out,” said Waters, owner of Whitehall Farm. “With our 10,000 words, maybe we give them something that can help them down the road.”

Hess is convinced any obstacle or challenge these men and women face will be overcome.

“Vets are such hard workers, so disciplined, so focused,” she said. “There’s no one better to have in a room. At end of our weekend, they cleaned up, vacuumed, did the dishes. They’re just a great group of people that can accomplish huge amounts, given the right direction.”