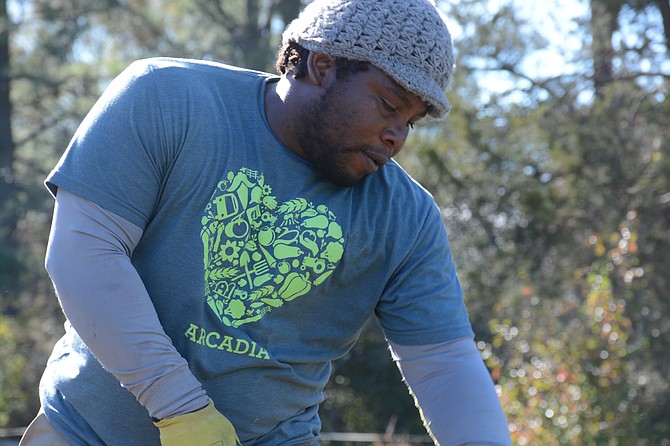 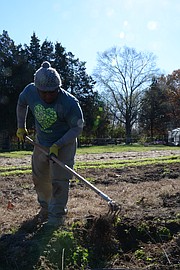 Laron Murrell turns over soil for winter at Arcadia Farm after pulling stalks of okra.

Beads of sweat on Laron Murrell’s forehead glisten under his grey wool beanie as he digs his hoe into the live earth. On one side, the Woodlawn Plantation mansion stands, a relic from 1800. The plantation overlooks Fort Belvoir, situated across Route 1 bustling on a gleaming Monday morning in November.

Murrell, 36, is turning over soil at Arcadia Farm for the winter, a two-acre project of intensive vegetable cultivation that’s bringing new life to the plantation grounds and surrounding communities.

An 11-year veteran of the U.S. Army and Army reserves specializing in equipment repair, Murrell is the first full-time fellow in Arcadia’s Veteran Farmer Program. He started his year-long post in October and will divide his time among classes on botany, soil chemistry and farm business practices, as well as working on the farm and helping manage volunteers that assist with planting, harvesting and other farm tasks.

Upon completion, Murrell plans to return to 55 acres of land that belongs to his family in Dover, N.C. and begin a vegetable farm of his own.

Independent farming is one of the main goals of the Veteran Farmer Program: giving former military a renewed sense of purpose and re-populating a farmer workforce that is aging and dying.

“There’s nobody tougher in this country than farmers and veterans,” said Pam Hess, executive director for Arcadia Center for Sustainable Food and Agriculture, of which the farm is one component.

“They share many of the same character qualities and are really up for this kind of work. Farming is hard, risky, nerve-wracking. But it's also meaningful and a true meritocracy — something people who've served really excel with.”

The Arcadia Center comprises a larger food system including the farm, which produced 6,300 pounds of fresh produce between May and November 2015, that goes out through two mobile food markets to be sold at reduced cost in neighborhoods with little access to fresh food. The markets make 19 weekly stops in Washington, D.C. and the South County Government Center.

In 2016, Hess said they will continue to work on expanding the reach of the mobile markets in northern Virginia. “We’re focused to figure out if we can crack that nut,” she said. “There are plenty of people not getting good food in the suburbs, but we haven't figured out qute yet how we can get to them.”

Arcadia Farm Manager Anita Adalja of Washington, D.C. pulls remaining debris as they turn over soil for the winter.

In addition to the farm and the mobile markets, Arcadia offers classes on growing and preparing fresh produce for schools, and then the Veteran Farmer Program, which recently began accepting applications for a reservist track, thanks to a grant from the U.S. Department of Agriculture.

Those veterans will spend one weekend each month and taking classes like Murrell, working on the farm and visiting working farms for practical experience with livestock, dairy, hydroponics and other styles of farming.

This Arcadia system is the brainchild of Michael Babin, a co-owner of the Neighborhood Restaurant Group.

“The beautiful part is all of our programs support one another,” Hess said. “That’s not an accident, but well thought out by Michael [Babin]. We’re growing food and growing farmers, getting people really loving and wanting healthy food. It goes out to mobile market and people actually buy it, then the demand goes back to the farmers, it goes around and around.”

The mobile markets were one of the big draws for Murrell when he applied for the Arcadia fellowship.

“They’re helping more,” he said. “It’s the best idea since sliced bread: You get your product out there and teach them how to prepare it.”

When Murrell left the Army in 2009, he worked in facilities maintenance for a pharmaceutical company for several years. “I felt like it didn’t have purpose,” said Murrell, who served in two tours in Iraq. “I knew I needed something else.”

He began talking to friends and Googling “What jobs are vets doing?” in an attempt to find something that would restore his sense of direction in life. That led him to agriculture, farming, something he remembered from his grandparents’ sharecropping town. He took a class at Pitt Community College in North Carolina and then while searching for apprenticeships came across Arcadia.

“I didn’t really believe it at first,” Murrell said when he heard he was accepted. “I was happy, excited. I wanted to come out the same week.”

Tysons Corner Ritz Carlton employees Tyler Donahue of Arlington (left) and Emily Gauthier of Maryland (right) volunteer at Arcadia Farm once a month. The pair are are bundling stalks of okra which will be used to build an arbor elsewhere on the farm.

Though his future veteran colleagues in the reservist program will begin early in 2016 with a dormant farm, focusing more on preparing for the new growing year and farming concepts, Murrell came on during the harvest, getting to see the end result first.

This Monday morning, Murrell has been helping lead volunteers from the Tysons Corner Ritz Carlton to harvest okra and turn over the soil for winter. Then they’ll plant “cover crop” like oats, peas and winter rye, to fix nitrogen and restore nutrients to the soil.

The learning has been constant and different every day, but Murrell is picking it up quickly.

“There’s a difference between not knowing why you’re there, to where there’s something to be done every day, like in the service,” Murrell said. “You’re doing this for a reason, for your community. It can solve a lot of your problems.”

Murrell used to go into the field with his grandparents on their North Carolina farm as a boy of nine or 10. He wants to go back to that land and develop it into an organic farm, for years to come.

For more information on the Arcadia Center for Sustainable Food and Agriculture, visit www.arcadiafood.org.