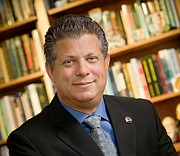 Lori Lopez, Chairman for the Tysons Regional Chamber of Commerce (TRCC) announced that Francis Gary Powers, Jr. has been hired as the Acting President effective Jan. 15, 2016. "Gary is a welcome addition to our leadership team and will build on the chamber's momentum to contribute to our goals for 2016 and beyond," said Lopez.

Born June 5, 1965, in Burbank, Calif., Powers is the son of Francis Gary and Claudia E. “Sue” Powers. He holds a Bachelors’ of Arts Degree in Philosophy from California State University, Los Angeles, and a Master’s Degree in Public Administration/Certification in Nonprofit Management from George Mason University (GMU). During his career Powers has held a variety of positions including Assistant Registrar for the City of Fairfax, Executive Director of a nonprofit dedicated to the historical revitalization of Old Town Fairfax, marketing manager for home inspection company US Inspect, and President/CEO for the Vienna Tysons Regional Chamber of Commerce from 2000 to 2005. As Chairman of the Presidential Advisory Committee for the Cold War Theme Study he works with the National Park Service and leading Cold War experts to identify historic Cold War sites for commemorating, interpreting, and preservation. Recently, he consulted for the Steven Spielberg Cold War thriller, “Bridge of Spies” about James Donovan who brokered the 1962 spy exchange between Soviet spy Rudolph Abel and Gary’s father, U-2 pilot Francis Gary Powers, Sr.

In 1996, Powers founded The Cold War Museum (www.coldwar.org) to honor Cold War veterans, preserve Cold War history, and educate students about this time period. Over the past twenty years he led that museum forward as Founding Chairman, which in 2011 opened at Vint Hill Farms, a former Army communication base in Northern Virginia. As a result of his efforts to honor Cold War veterans, the United States Junior Chamber of Commerce selected him as one of the “Ten Outstanding Young Americans” for 2002. Powers lectures internationally and appears regularly on the History, Discovery, and A&E Channels. He is married and has one son.

The Tysons Regional Chamber of Commerce serves the diverse businesses and citizens in the Tysons region through networking, educational, community, and collaborative events. For more information, visit www.tysonschamber.org.