City officials look at challenges and opportunities in 2016.

The Alexandria City Council brought in 2016 with a roar of bagpipes. The City of Alexandria Pipes and Drums played in the auditorium of T.C. Williams High School for the council’s Jan. 4 installation, but soon, it was right back down to business. 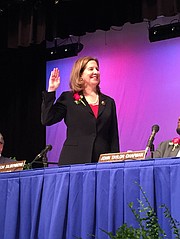 “What and how to build from the West End to Old Town while maintaining our sense of community is a top priority,” said Silberberg, whose campaign had focused heavily on the need to balance between neighborhood conservation and economic development throughout the city.

Another item the new mayor has been pushing forward is the idea of an ethics commission. The idea springs out of the 2015 state level proposal for new ethics standards. Silberberg proposed establishing a Transparency Study Group to look into an ethics pledge, areas of focus regarding ethics, and structures and duties of a future ethics advisory commission.

“We should be a national leader in ethics and transparency,” said Silberberg. “There are ethics commissions across the nation … We have many commissions in our city, including the beautification commission, but there is no ethics advisory commission.”

The idea has built support among some in Alexandria, including an endorsement by the Alexandria Federation of Civic Associations (AFCA). Roy Byrd, co-chair of the AFCA, said that supporting and being involved with ethics reform in Alexandria is one of the AFCA’s major goals for 2016.

“We wanted to make sure it has a little more grist to it than just ‘we’re going to have a study group to look at ethics’ and then it goes away,” said Byrd. “[It’s] about trying to change the culture. The best way to describe that is going from a compliance-based way of looking at it to value-based. We find that as an important distinction. That’s something the citizenry will definitely appreciate.”

To give ethics reform any kind of legitimacy in Alexandria, AFCA board member Frank Putzu said an advisory group would need to be formed to look at the scope of a potential advisory commission and assess what kind of authority the potential commission would hold. Appointment to an ethics commission, Putzu noted, would also need ethical screening to ensure non-bias.

“We don’t want it devolve into a political food fight,” said Putzu. “We need folks with credibility in the area with no stake in the outcome.”

Specifically, Putzu recommended reaching out to local academia and to lawyers with no business before the city but who’ve dealt with these types of ethics issues before.

Ali Ahmed, the other co-chair of AFCA, specified that an ethics commission should focus on improving disclosure of matters that could affect decision making and making advisory options requested by officials or the public available. Ahmed and other supporters in the AFCA also repeatedly noted that any type of ethics reform shouldn’t look to cast judgement on decisions rendered before its implementation.

“From our perspective, we’re not looking at this in terms of commentary on the previous administration,” said Byrd. “We want this forward looking.”

Silberberg addressed this point in her inaugural speech as well, saying that any ethics reform would not retroactively affect or target past decisions, and that it wasn’t spurred on by any particular actions.

“We should repair the roof while the sun is shining,” said Silberberg. “We do [this] only in a forward looking way.”

Among Silberberg’s other stated ambitions was the extension of Alexandria’s tree canopy from its current goal of 33 percent coverage to the national goal of 40 percent coverage.

“I challenge us to make this a reality in one decade,” said Silberberg. “I ask our city’s children and youth to help us change our landscape. Ask your family to plant a tree in your honor for a holiday or birthday gift. Help green up our city.”

Silberberg also included a hope to extend library hours throughout Alexandria to include Sundays, calling it an investment in the future.

The meeting also marked the official selection of Justin Wilson as vice mayor. For Wilson, many of the upcoming challenges for Alexandria will be regional. Wilson told an anecdote about his son who was amazed that his teacher lived in as far away a location as Springfield.

“Even at an early age, he had developed a mentality that we have here in the city sometimes that anything on the other side of Four Mile Run or on the other side of the beltway might as well be in Siberia,” said Wilson. “But I think the challenges that this council will deal with over the next three years are very much regional in nature, and they are going to be the test of whether we’re successful.”

For Wilson, the biggest challenge is the looming economic threat hanging over the city, which is troublesome for a city Wilson described as still trying to catch up on delayed investments to the city infrastructure.

“I think one of those important challenges will be how we manage the transition of our economy,” said Wilson. “We see the storm clouds. The job creation in D.C. region is among the lowest in the nation for the last three years. That’s a real threat to our economy.”

“Ten years ago, [business consumption taxes] paid 15 percent of the costs of government,” said Wilson. “Today they pay 13.5 percent. That’s a major challenge for our city and it threatens our ability to provide the services our residents expect us to maintain.”

One of those services that Wilson said has been hit hardest is Alexandria Public Schools.

“Our commitment to our children is threatened by the twin challenges of capacity and preparedness,” said Wilson. “Last year, 20 percent of the students who started in Alexandria schools had no preschool experience to speak of. For many of those children, they started out as behind from day one.”

Wilson also warned that the city was not prepared for the population of students working its way through the school system.

“There are over 1,500 kids in Alexandria’s kindergartens today,” said Wilson. “I’ve heard kindergarteners have a way of becoming ninth graders.”

According to Alexandria School Board Chair Karen Graf, the need to expand facilities is the school system’s highest priority goal. Part of that goal is the planned building project at Patrick Henry Elementary School, which will replace the aging structure with a new school building and boost the school’s student capacity from 600 to 800 students. The School Board and City Council are slated to collaborate on the project in a series of joint work sessions. Opening for the new school is currently scheduled for Fall 2018.

“We’re looking at our 10-year plan for expanding our existing facilities as well as planning for future population growth,” said Graf. “A lot of that planning is happening this year.”

Wilson is also not alone in emphasizing the importance of pre-k education in Alexandria schools.

“We want to offer a pre-k space for every four year old in the city,” said Graf. “Studies show [it] sets [students] up for the future of their academic life. It’s investing up front rather than later.”

If Alexandria could achieve their goal of universal pre-k, Graf said they’d be one of the first cities in Virginia to do so.

“We’ve laid out a Capital Improvement Plan because we know from the joint work groups between the city and the schools that capacity is a major thing we’ll have to deal with,” said Campbell. “But at the same time, we’ve seen that we also need to begin modernizing our facilities or it’s going to cost us in the future.”

But schools aren’t the only major demand on City Council funding. Other City Council members raised affordable housing, infrastructure development, and equitable pay raises for city employees as other city priorities for 2016. Negotiations on funding those priorities will continue as the City Council moves into its budget procedure in the spring.

2015 was a significant year for Commonwealth Attorney Bryan Porter, who oversaw the prosecution of now-convicted Alexandria serial killer Charles Severance. For the first part of 2016, Porter said his office is working on the broader range of issues affecting criminal justice in Alexandria. The first priority is assessing the viability of body cameras. Porter said his office needs to look at how cameras would affect discovery obligations, a pre-trial procedure concerning obtaining evidence. Aside from the financial impact of his office requiring an additional staff person, Porter said he couldn’t see any immediate downsides to the implementation of body cameras.

Porter will also begin prosecution for a 2009 homicide case against Willie Smith, a non-city resident who was arrested in the murder of Michael James Horton near the Braddock Road Metro Station.

Porter and Alexandria Law Enforcement officials have said there’s been no new update on the four unsolved homicides in 2015, including two that also look place near the Braddock Road Metro Station.