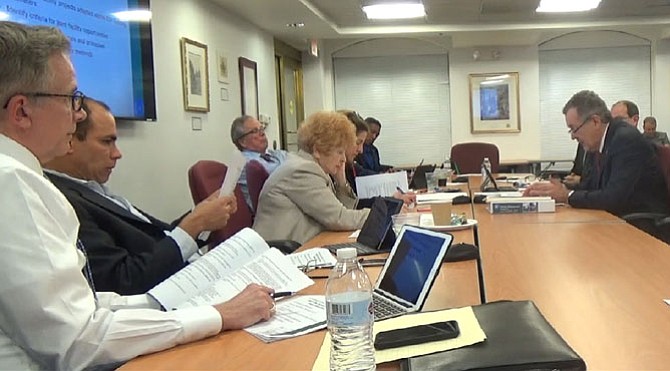 At the April 19 work session, the City Council and the city manager discuss a potential new joint task force with the public schools.

Alexandria — With simmering miscommunication about long-term capital planning coming to a boil in this year’s budget cycle, City Council and the School Board are considering restructuring their interaction.

The challenge stems from a statutory division of powers. Alexandria City Public Schools (ACPS) build their own budget and manage their own infrastructure projects. The city raises the revenue and foots most of the bill. Neither has any authority in the other’s part. Misaligned planning makes long-term commitments unreliable, encouraging front-loading capital projects and fierce competition for resources in the near term.

“We don’t really have 10-year CIPs [Capital Improvement Programs]. We have one-year CIPs,” said Ramee Gentry, School Board chair. “What we are doing right now is clearly not working.”

The new diplomacy follows Vice Mayor Justin Wilson’s March 14 proposal to create a Joint Ad Hoc Alexandria Municipal Facilities Plan Steering Committee. While leaving the details vague, Wilson described it as a “blue ribbon group” tasked with “synthesiz[ing] those two [bodies’] visions.” It would provide advisory “input” to both the city and schools’ budget processes next year. The council approved the proposal in conjunction with setting the maximum tax rate. They tasked City Manager Mark Jinks to recommend a specific implementation plan, which he delivered at the council’s April 19 budget work session.

The proposed group, renamed the Ad Hoc Joint City-Schools Facility Investment Task Force, would tackle an array of interrelated tasks. Its priority task would be to recommend to council and the school board a “joint” CIP — a mutually agreeable “prioritization” of city and school projects over 10-15 years, beginning FY2019. The joint CIP would utilize “identified available funding,” including additional revenue — as much as $11.6 million — set aside from any tax rate increase above Jinks’ initially proposed 2.7 cents.

Task force membership would comprise “nine highly qualified, disinterested persons who work or live in Alexandria and who do not hold public office or are employed (directly or via contract) by either the city or ACPS.” While ACPS Superintendent Alvin Crawley would nominate three members, Jinks would exercise final approval authority. The nine members would include experts in architecture, engineering, and urban planning; education; facilities planning; asset management; construction; finance; business; real estate development; and related law. The planning and zoning department would temporarily reassign staff to support the task force.

Upon completing its tasks, the task force would disband. The council and school board would then hash out and implement — or not — its recommendations, including potential new mechanisms to institutionalize lasting change. For example, at the April 24 City Council-School Board Subcommittee meeting, Wilson and Gentry discussed collaboratively formulating a new “Redevelopment [Memorandum of Understanding]” and future budget guidance.

Council discussed Jinks’ task force recommendation at length at its work session. Council members will consider it further and put it to a vote on a date as of yet undetermined. But “there is a time sensitivity,” said Jinks; the task force would need to complete its work by “mid-fall,” in time for next year’s budget process. “We should formally request input from the schools now” in order to “adopt when we adopt [the budget on May 4], so that we don’t waste any time,” said Wilson.

The task force would cost an estimated $414,000 — $300,000 for experts from a consulting firm(s) and $114,000 for temporary “added backfill staffing” in the planning and zoning department. Worrying about this cost, Silberberg suggested that existing city staff or bureaucratic structures might instead assume the task force’s intended function.

“Given the Task Force’s work is short term and intense, and given staff’s limited resources, having a professional firm knowledgeable in facilities planning and project implementation would help the process move along more quickly and with more expert technical assistance,” said a subsequent budget memo in reply. Or, as Councilman Paul Smedberg put it, “We’re used to putting together these warm puppy piles that take forever to get stuff done, and that’s part of the problem.”

The budget memo continued: “The Task Force proposal was drafted to be comprised of members with technical and professional expertise in a number of facility related areas, and that is not the composition of either [the Budget & Fiscal Affairs Advisory Committee] or the [City Council-School Board Subcommittee],” two existing entities. “The Task Force is intended also to be ‘disinterested’ and neutral, which city staff and ACPS staff may not be in regard to the projects for which each of those staffs are responsible.”

“There’s real value in us coming together and reaching a consensus on looking ahead the next 10 years: how do we prioritize and space out all of these different projects? And then the real key is to then commit to that,” said Gentry in an April 10 interview. “Even if the result of that planning requires, on both sides, not necessarily getting what would have been their first preference for the order and years in which projects happen, the trade-off of … knowing with a real degree of certainty that your project X will happen in year Y is an extremely useful, helpful item in terms of planning.”

Other School Board members voiced tentative hopes at a March 23 ACPS work session.

“What I’m really looking for is a narrative across the two bodies that creates … empathy … for the other body’s issues,” said School Board member Karen Graf. “I think that’s what’s [been] lacking in Alexandria for decades. … So I would hope this would mature our … ‘team motto’ ..., our ‘team ethics’ about how we’re going to approach it.”

“We haven’t had this sort of rational approach to a CIP that covers everybody’s needs,” said School Board member Margaret Lorber. “I just think it’s a new era and that we really do have to look ahead and do things a little differently.”

“That is not [the city’s] place, to look at line items and try to decide with us what we shouldn’t be doing,” said School Board member Ronnie Campbell. “But I do think that there’s a light at the end of the tunnel as far as working together jointly when it comes to space … It could really work. But we have to get together and understand what we’re going to be talking about together: it’s not line items; it’s joint ventures.”

“The Long Range Educational Facilities Plan only looked at our stuff, and so we never saw it weighed against theirs,” said Graf. “If they sort of want to pick at our stuff, well, their stuff should be there too, and we should all pick at the basket together, of stuff that we need to do as a city.”

All in all, “we do need to find that sweet spot of joint, collaborative planning and thinking,” said Gentry. “So joint planning without getting to a point that one side or the other feels that they have completely ceded control or authority. … This’ll be the tension point.”

See task force related materials at www.alexandriava.gov/budget/info/FY18Memos (Questions #68 and #69). The next School Board meeting — the last before council’s probable May 4 vote — is April 27, 6 p.m., in the ACPS offices at 1340 Braddock Place. Council has no further public hearings before May 4. But residents can communicate directly with council members via request.alexandriava.gov/CCC.