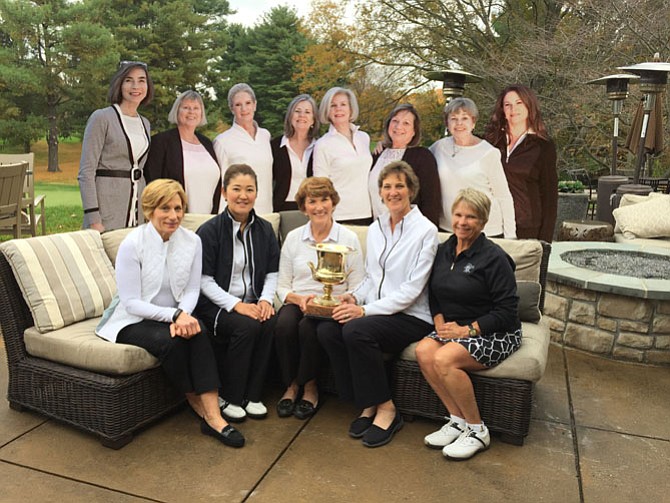 With long drives, solid putts and confident chips, the 18-hole women of Bethesda Country Club (BCC) won the Challenge Cup for the first time since the competition began eight years ago.

Playing against Lakewood, Chevy Chase, Columbia, Woodmont and Congressional Country Clubs from May through October, the team was victorious in each match and thus, will bring the Cup home to BCC after the Challenge Cup Finale on Oct. 8.

The format of the Challenge Cup is unique in that players compete without handicaps – or strokes; however, captains work to pit players with like handicaps against one another. Club team captains meet in the spring to agree on dates for the matches. Each club hosts three times during the season and provides three teams of two players (six women golfers) to compete in all matches. The point system is used, earning one point for winning the front side, one for the back side and one for the team with the most holes one.

Bethesda Country Club played five matches, earning 31 and a half points. Their final match was played in rain — soaking the players, their clubs and carts. BCC took 6 and a half points over Chevy Chase. Team Captain Louise Melby, who led the group to victory with her stellar play, said, “Due to the great spirit that Julie Rose, Dawn O’Neill, Pat Haskell, Mary Karen Wills, Sue Belford and Debbie Toomey exhibited playing in this awful weather, BCC was victorious. Throughout the season, all BCC members who played really help to contribute to this win, including Rita Liptz, Akemi Maegawa, Bridgit Fried, Cindy Taylor, Irene Zuckerman and Jackie Voorthuis. This was the 8th season for the Challenge Cup matches: Congressional has won the Cup 5 times, and Columbia, Chevy Chase and now us, have each won the Cup once.”