Hardships continue for deputy sheriff, while family and coworkers help. 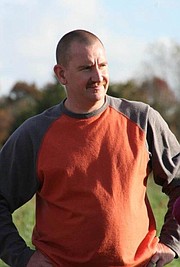 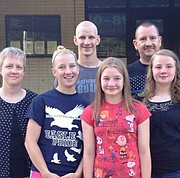 Sergeant Chris O’Dell with his family

People at the Alexandria Sheriff’s Department say good things about Sergeant Chris O’Dell, but one of the most telling stories about O’Dell is when he saved an inmate’s life in August 2014. The inmate at Alexandria’s Detention Center, suffering from mental health issues, pressed a pen against his own throat and was on the verge of suicide when O’Dell approached and talked him out of it. For his actions, O’Dell was awarded the Lifesaving Award at the annual Valor Awards.

But less than a year later, another act of altruism inadvertently left O’Dell hospitalized with severe brain damage.

Last June, O’Dell was on duty at King’s Jewelry on King Street. When his shift there ended, he headed back towards the headquarters in Eisenhower to turn in his car, but stopped along the way to help a deputy whose car had been disabled. He helped to push the car, but in the process tore his carotid artery. He didn’t know it at the time. He checked out from work, changed, and drove home to Spotsylvania. It was only once he reached his house that his wife, Beth O’Dell, noticed that something was wrong. Chris O’Dell had a headache. He was stumbling and dropping things he tried to pick up. Once he started saying words that didn’t make sense, his wife realized what was going on. Chris O’Dell was having a stroke.

The doctors managed to repair Chris O’Dell’s carotid artery, but he spent nine more days in the Intensive Care Unit, then at rehab in Mount Vernon for several weeks. The stroke left Chris O’Dell with aphasia, a disorder that critically affects the victim’s ability to communicate. While Chris O’Dell has returned home, the challenges to him and his family haven’t stopped.

“As far as what’s to come, we don’t know,” said Beth O’Dell. “We went back recently to the neurologist and she does not feel that he will be able to return to work. That’s two weeks ago, so now we’re trying to figure out the next plan.”

Beth O’Dell says this wasn’t something her family had been prepared for. Chris O’Dell O’Dell has been with the Sheriff’s Office for 21 years and still had nine years left before he expected to retire. Both Chris and Beth O’Dell were working full time, Beth O’Dell as a special education teacher, while also raising four children, the youngest of whom is 12. She said insurance helped cover the costs, but over time the copays started to stack up: copays of at least $500 per hospital visit, weekly therapy sessions, radiology treatment. Beth O’Dell said the family had been expecting benefits under the Virginia Workers’ Compensation Act, but the family received notification in December that the claim had been denied because the commission felt that the injury was not workplace related. Beth O’Dell is putting together the medical records and writing back explaining why the injury was work related, but the appeal process could take up to six months.

Chris O’Dell is currently on leave from the Sheriff’s Office, but it seems unlikely that he’ll be able to return. When his saved up leave expired, he used his sick leave. Now, other members of the Sheriff’s Office have been anonymously donating their own leave time to Chris O’Dell. Sheriff Dana Lawhorne says the donations are allowed as part of a city-wide program, and Lawhorne confirmed that he and other members of the Office had contributed time. Lawhorne echoed the sentiments of other Sheriff’s Department employees, saying Chris O’Dell was an outstanding and dedicated employee. One of the other employees, Lt. Monique Rea, has set up a fundraiser to help the O’Dell family at youcaring.com.

"Everyone here, including City Hall, are doing their best to work toward a positive outcome for Chris,” said Lawhorne.

The Sheriff’s Office has a disability plan, but Beth O’Dell said the plan only extends for three years to give the family time to find something new.

“He’s not able to drive,” said Beth O’Dell. “We have to rely on people to help get him to his therapy appointments. I work full time. I teach in Spotsylvania County. So it difficult to coordinate all of his care, like calling doctors and calling medical places and records. I never thought about it until now, but they’re only open 9 to 4. It’s been hard.”

For Chris, Beth O’Dell says one of the hardest parts has been communicating, generally in conversations, but also in explaining the extent of his injuries.

“It’s a traumatic brain injury,” Beth O’Dell said. “It’s hard to explain that to people … when you look at him, you don’t see the disability. He has to talk to people and tell them he’s had a stroke and needs people to talk slowly to him.”

For Chris O’Dell, communicating without visual cues has been next to impossible. He’s unable to get on the phone and talk to people or coordinate with others in his office. But the family is finding ways to overcome this. Texting has replaced phone calls as the primary form of mobile communication.

“Communicating within the family, we’ve accommodated, but we’re still learning how to deal with it,” said Beth O’Dell.