Arlington: Lift Off for Potomac Gondola

A look at the initial feedback from citizens and advice from an existing gondola system. 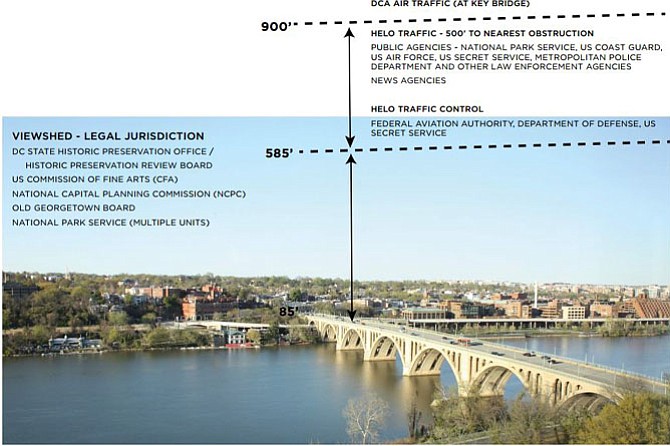 The Georgetown-Rosslyn Gondola baffles people. The proposed tram alongside the Key Bridge has drawn a mixture of interest and confusion. As the feasibility study begins, little new information about the cost of the project was revealed at the first meeting. The size of the gondola, the building and operating costs, and how much it will cost to ride are all still yet to be determined, but this hasn’t kept the project from attracting attention at the July 7 public meeting in the Rosslyn Spectrum Theatre.

“I was initially very skeptical,” said Mary-Claire Burick, president of the Rosslyn BID, one of the partners in the Rosslyn-Georgetown gondola project. “But transportation is a challenge in the region. This solves congestion on the bridge. [This helps people] going to work in a suit on a hot summer day …. But this has to be easy and seamless. That’s what people are looking for. [The feasibility study] is about finding out what it would take to get there. That’s why it’s important to host this meeting, to engage the community early on our side of the river.”

During their presentation, project staff repeatedly referenced the Roosevelt Island Tramway and the Portland Aerial Tram as two other successful gondolas operating in the United States.

Brett Dodson has been tram manager at the Portland Aerial Tram for six of the project’s nine years of operation. The Portland Aerial Tram averages 8,500 rides per day. Dodson said the tram moved 2.1 million people in the last year, double what the city had projected. Like the Rosslyn-Georgetown gondola, Portland’s Aerial Tram is designed to help commuters cut around traffic.

“People get to look down below and see all the traffic and congestion, looking at the red lights and going past them,” said Dodson, though he added that the tram has also become integrated as part of the local culture. “We also hear about the social side of it. [Commuters] ride the same cabin with the same people for the same five-minute ride.” 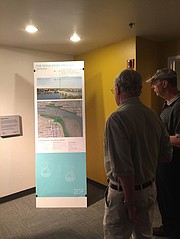 “There are examples of working gondolas elsewhere in the world, but it is unclear whether using them in Arlington would deliver the kind of results some believe.”

Arlingtonians gather at the July 7 public meeting in the Rosslyn Spectrum Theatre.

As the feasibility study moves forward, there are a few experiences from the Portland Tram operation Arlington’s gondola project could learn from.

“There’s a lot of bikes,” said Dodson. “300 to 500 bikes per day on the tram. It’s a much wider variety of people than was initially thought. We’ve worked a lot on developing bike parking and a free bike valet. Park them at the bottom of the trail so they don’t come on. We’ve set up a loading and unloading system, with up to six bikes per cabin and they all go in one spot. Everybody else loads the other 70 percent of the cabin, then people get off and the bikes get off afterwards. That’s helped minimize the conflict. We had people in a white dress lean up against greasy bikes and that didn’t go over well.”

The more Dodson talks about the situation in Portland, the more similar the setting seems to the Rosslyn-Georgetown gondola.

“We’re space constrained,” said Dodson. “We don’t have a lot of parking, it forces people to commute. People can be on the bus for 20 minutes, maybe 30 or 40, or take a five minute tram ride. We have a lot of commuters, in the past, that wouldn’t have used tram but then they sit in parking and see the tram overhead.”

One major conflict the early tram development faced was ballooning costs. Dodson said the companies that build the tram got their price estimates from ski resorts with mountain gondolas, but didn't take into account many of the urban development costs that came in after those initial price estimates.

“I think it’s really getting tight budget numbers to start with,” said Dodson. “But the price tag is already much closer than Portland had [at the start].”

Arlington is no stranger to growing costs on major projects. The first public meeting on the gondola was held in a theater beneath Freedom Park, site of the failed Loop Bridge in the 1990s, and one block away from the Artisphere, Rosslyn’s failed art center. The accidental symbolism of the meeting was not lost on meeting attendees. Dave Schutz, a resident of Ashton Heights, said he believes the shadow of the widely unpopular Columbia Pike streetcar looms over the board when it comes to major projects, especially transportation initiatives. Two of the County Board members won or maintained their spots on the board largely through their opposition to that project. The two newer members actively worked to distance themselves from the project during their election in 2015.

“There's an overlay to this project that is not fair,” said Schutz.

For local citizens, reactions to the gondola have been mixed. Paul Kelly and Hal Steinberg are neighbors in Turnberry and look through the gondola proposal with different conclusions.

“I think this is good,” said Kelley. “I would use it. It's nice to get up for a bird’s eye view or across the water for a weekend walk.”

But Steinberg isn't as convinced.

Steinberg isn't alone. Many residents opposed to the gondola are dubious about the project’s utility.

“I’ve urged the board not to spend the money on the gondola, it’s not our problem,” said Daryl Deprengur. “This [meeting] hasn’t changed my opinion on the project, but it’s proper to do a feasibility study instead of just jumping to a conclusion.”

“I'm not sure what it would add,” said Charles Logan, a Rosslyn resident. “It would look nice, but is it really just saving people a walk across the bridge?”

It is. But according to Schutz, that can be a bigger benefit than some residents realize.

Schutz’s personal support for the project comes from trips with his wife across the river to the Georgetown University Hospital for cancer treatment. Schutz says his wife’s options were either struggle with parking in Georgetown at the crowded hospital parking garage or take the bus in and sit in the morning traffic.

“I think it would be a cool addition,” said Alexandra Garcia. “I’d be interested in knowing who the primary user they have in mind is. Is this for tourism or local commuters?”

There's still a long way to go before the gondola concept turns into a functional aerial tram. Twenty-seven agencies throughout the area will need to be part of the approval process.

“There are examples of working gondolas elsewhere in the world, but it is unclear whether using them in Arlington would deliver the kind of results some believe,” said Frank Shafroth, director of the Center for State and Local Government Leadership at George Mason University. “The harder issue, should they continue opt to move forward, would be the years to navigate working with Park Service and other Federal partners.”

Arlington County contributed $35,000 into the feasibility study for the gondola, which is expected to take a year to complete.