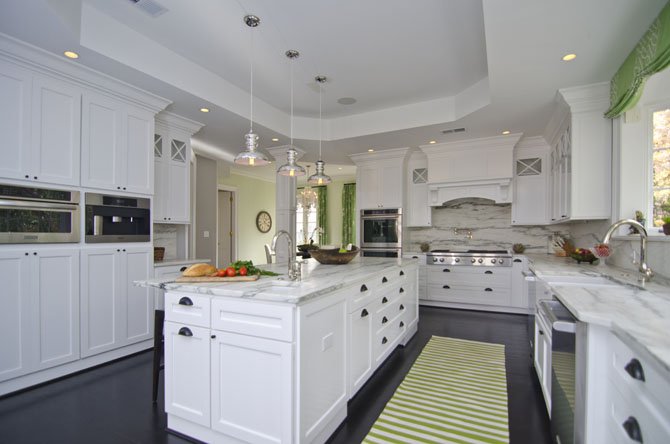 When Allie Mann of Arlington, a designer and senior interior specialist at Case Design/Remodeling, Inc. was tasked with giving the first floor of a McLean, Va., home a face lift, she had to think free-flowing and airy.

"[The] client wanted to focus on making kitchen feel open and connected to rest of home," said Mann. "[They] needed to have plenty of space to cook and entertain plus lots of storage."

Mann said the homeowner was making a cross-country move and settling in Virginia, so adhering to a strict timeline and budget were critical.

However, near the end of the project, the homeowner wanted to make a change.

"At nearly 85 percent job completion, client decided they wanted to completely remove the wall between the kitchen and family room. In the original design, we partially removed the wall," said Mann. "This meant a shift and redirection of scope, additional engineering [because] the remaining portion of the wall housed a three-story fireplace, relocation of cabinets had already been installed and modifications to counter tops. And still deliver a project close to on time."

The finished kitchen is a light-filled space with cabinets by Crystal Cabinetry, honed Vermont Marble countertops and appliances by Sub-Zero, Wolf, KitchenAid and Miele.

The rest of the back splash in the kitchen is horizontal, which is the standard for subway tile, said Brick.

"The paneled refrigerator helps conceal the appliances and helps them to blend in with the cabinetry to give the aesthetic more continuity," said Brick. The kitchen includes easily accessible storage space and ogee-edged granite counter tops.

OPENING UP and adding light were priorities when Guy Hopkins Semmes, partner and founder of Potomac-based design-build firm Hopkins and Porter and Lea Allen, one of the firm’s senior architects, remodeled the kitchen of a Bethesda, Md., home.

"The kitchen was small, but we were able to add a lot more space, by making few minor changes," said Semmes. "Before there was an enclosed porch next to the kitchen. We opened the wall between the kitchen and the adjacent enclosed porch."

Semmes and Allen made another major elimination: appliances. "We got rid of the refrigerator and moved it downstairs," said Semmes. "All of the other appliances are located under the counter and open up like drawers."

Semmes also found a creative way to make the space more light-filled. We took out a stairway wall to the second floor and replaced it with a triangular opening so light from stairwell came down into the kitchen."

The kitchen now has maple cabinetry and white Silestone countertops. "It was done on a budget. It’s amazing what you can do when you work with what you’ve got."