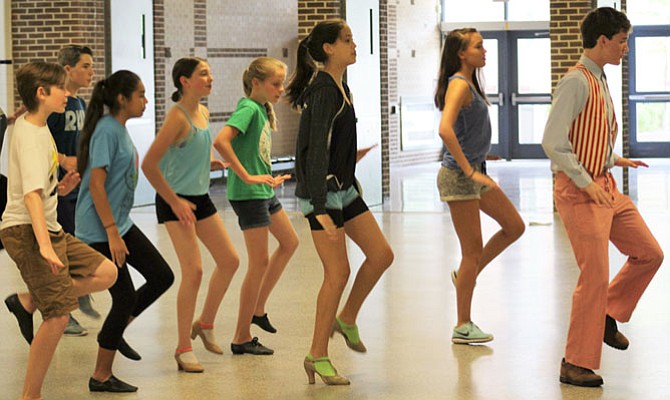 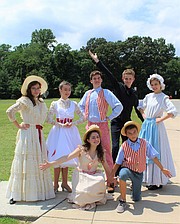 Voices raised in song echoed down the halls of Hayfield Secondary School on Thursday, June 30. More than 65 students have chosen to start their summer by working rigorously to premiere Hayfield’s first summer play, the Disney and Cameron Mackintosh’s musical version of “Mary Poppins.” The students must memorize lines, dance routines, musical scores as well as create the sets and special effects in a mere 24 days.

“Mary Poppins” features more than 50 actors and 15 technicians with ages ranging from rising eighth-graders to rising college freshmen. Many are students at Hayfield, but Annandale High School, South County High School in Lorton and Holmes Middle School in Lincolnia also have students participating in show. The mix of ages and schools presents a unique challenge for the students.

“It can be hard at first to make sure folks are included,” explains Jackson Miller, playing George Banks. But with a common goal, they’ve grown close. “It’s more like a family than splitting up into age groups and people they already know,” Miller said. Rising eighth-grader, and among the youngest in the cast, Creed Bauman, playing Michael Banks, agrees, “It’s so fun to bond with everyone in the cast and acting beside them is not like anything else,” he said.

The Disney Broadway version of “Mary Poppins” isn’t the same as the movie. It’s still a heartwarming story of a magical nanny reuniting the Banks family, but the show provides more character depth and background. Casey Charbonneau, attending college in the fall, plays Winifred Banks, the mother. In the movie Winifred was a suffragette, not much else. In the show there’s much more to Winifred and her personal growth, explains Charbonneau, she even has a solo in the second act.

In addition to the nuances of story dynamic, are the technical requirements of the show. “It’s on a whole different level, a lot more complex and moving pieces,” said Kyle Dalsimer, comparing the show to his previous experiences in “Peter Pan,” “Aladdin,” “The Hobbit,” “Beauty and the Beast” and “The Musical Comedy Murders of 1940.” Dalsimer will open the show as Burt, sitting on top of a chimney stack.

The students are responsible for devising the special effects to give Mary Poppins her magic. “They have to figure out how to have a whole kitchen get destroyed and come back together,” explains Pat Mitchell, Hayfield Theatre Director, “shelves that fall and come back into place, a table that gets knocked over and snaps back…”

Although the main point of the production was to create a program so the kids could “build confidence… and community” according to Mitchell, high school theater provides benefits to the community at large. Mitchell said that “Mary Poppins,” like all of Hayfield’s main stage shows, are a “high quality production that is family friendly, at a good price and shows that are well known and popular.”

“Mary Poppins” is also the start of a fundraising campaign for the DramaHawks. Hayfield won a nomination in the American High School Theatre Festival, a DramaHawks first. Mitchell explains that the award gives the opportunity for the actors to visit London and then perform at the August 2017 Edinburgh Fringe Festival in Scotland. The festival is one of the largest art festivals in the world. “Mary Poppins” and Hayfield’s three mainstage productions next year will help offset the cost of the trip.