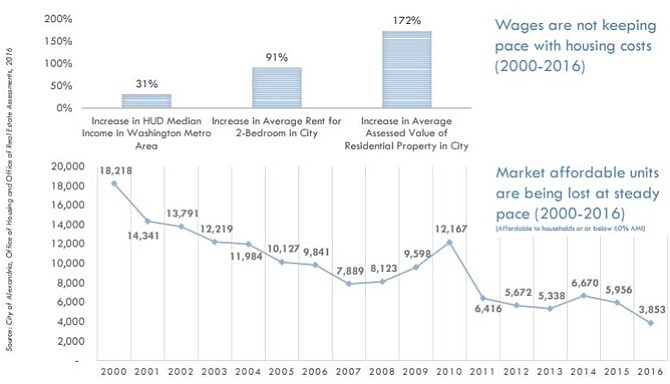 Alexandria has lost of 8,000 market affordable homes since 2010. Most weren’t lost to dramatic demolitions or fires. They were lost in moments like the one Clifford Wilkening is facing; where an increase in property taxes is forcing the owner of 31 buildings housing 200 city residents to consider his first rent increase in around eight years.

“Wages have been stagnant,” said Helen McIlvane, director of Housing. “It does not take a big bump in the rents for things to show up as being a big loss of affordable housing. It’s a reflection of the fact that wages aren’t keeping pace.”

While some of those rents are increased when apartments are remodelled for more of an upscale client base, Wilkening says many apartment owners are struggling to keep pace with rapidly rising property tax increases. For Wilkening, property values rose by about $11,000 last year.

“The property value is going up, but that doesn’t pay the bills,” said Wilkening, who noted that the increased values, and increased taxes, hurt the apartment owners trying to keep their units affordable. “I’m tired of people thinking we’re in it for the bottom line.”

Wilkening’s tenants are largely Alexandria’s working class, many are teachers or young people starting out at nearby offices like the Patent and Trademark Office. A few local police officers have lived in the apartments. According to Wilkening, a $15 rent increase to keep up with the property tax increase could force a lot of those residents to look for housing outside of the city.

“When those values rise, the costs of rental housing rises; as, of course, does the asking price for homes and condos,” said Frank Shafroth, director for the Center of Regional Analysis at George Mason University. “It puts an increasing amount of a county or city’s housing out of reach not just for new families but also for those potentially forced out of housing when their current lease expires.”

According to Shafroth, third parties that offer housing without directly paying taxes could also start to put a larger strain on the city’s economy, forcing those property taxes higher.

“This problem has grown worse with the advent of Airbnb,” said Shafroth. “Airbnb, which has some 1,500,000 listings in 34,000 cities around the globe and projects annual revenues of $10 billion by 2020, [is] creating an awkward governing balance between states and local governments, and between the provision of affordable housing and municipal revenues. The increasing challenge for municipal leaders, especially in high housing cost cities, is how to balance the needs for affordable housing against potential Airbnb tax revenues, amid apprehensions that Airbnb is driving up rents to unaffordable levels. According to a report ‘Short Changing New York City’ by a consortium of housing activists in New York, 55 percent of the 51,000 or so Airbnb listings in the city were considered commercial .… The report notes that the number of vacant and available apartments in New York City would increase by 10 percent if those listings were returned to the rental market. And, presumably, rents would drop by an offsetting amount, making for significantly more affordable shelter for low and moderate income families.”

Currently on airbnb.com, there are over 300 listings for apartments available in Alexandria for rent.

But while both Wilkening and McIlvane recognize the vanishing market-affordable housing as a problem, both struggle for solutions.

“[The city] doesn’t have authority under Virginia law to change the tax rate for one or more particular people,” said Melodie Seau, division chief of the Alexandria Office of Housing. “We can exempt certain types of properties, but we can’t say “If you keep units affordable, we’ll keep tax rate lower.’”

“We can’t direct them not to raise rents,” said McIlvane. “With committed affordable units, there is a clear ceiling and rents have to take into account. But we don’t have control over the market.

“A few years ago, Melodie [Seau] convened a meeting with landlords to find out what to do to moderate rents, like low interest loans for building repair. But most don’t want to have government interference.”

Wilkening confirmed that more government interference is exactly what many property owners don’t want. From accepting tenants from the Alexandria Redevelopment and Housing Authority (ARHA) to city maintenance workers destroying decorations on the nearby noise barrier by Route 1, Wilkening has a laundry list of bad experiences with the city.

“I don’t want the city involved, the bureaucratic process will muck it up,” said Wilkening. “I don’t trust the city, many [apartment owners] don’t.”

Meanwhile, year after year, the city continues to lose its market affordable housing.

“The constant bottom line is that we continue to lose market affordable units,” said McIlvane, “partly because rents go up and partly because wages are stagnant. We’re in a market with a very high demand for housing.”