Arlington: The State of Affordable Housing

Arlington continues to struggle with loss of affordable housing. 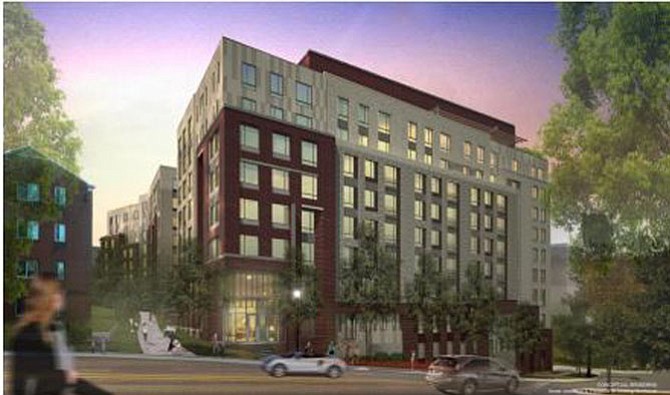 Columbia Hills Apartments is the Arlington Partnership for Affordable Housing’s 229-unit affordable housing development near Columbia Pike. Construction on the project began on June 9 and is expected to open spring 2018. Photo Contributed

The number of committed affordable housing units added in 2015 compared to the target 2015 goal.

“A little more than a thousand units each year [are] lost to demolition, conversion, and rising rents,” said Nina Janopaul, director of the Arlington Partnership for Affordable Housing. “Trend is continuing. At the beginning of 2016, we had a new wake up call seeing 25 units of market affordable housing demolished in the Westover neighborhood for new townhouses that will be going for close to $1 million.”

“When a property changes hands, it can be redeveloped by right,” said Cristeal. “[In this circumstance] there’s no relocation assistance and very few ways we can intervene.”

The county will sometimes work with a developer to try and offer redevelopment resources to help the citizens living in affordable housing find a new home. Cristeal says that did not happen in the case with Westover.

“Sometimes a small property owner will buy and sell a property, and they don’t have to tell us,” he said.

Cristeal says his team is working on ways to get around by-right development where it takes away from Arlington’s affordable housing, with options ranging from tax exemptions to looking at historic property protections. But, Cristeal said, most property owners don’t have to comply with county requests.

“It’s Arlington, there’s always challenges for space. Westover is a symptom of the market,” said Cristeal. “It’s a desireable neighborhood ... and this is not unique to Westover.”

Across town in the Ballston-Bluemont Community, Cristeal says more affordable housing is being eliminated to make room for new, non-income restricted apartments on a property sold by-right. When housing is eliminated and the county cannot offer relocation assistance, that burden falls on some of Arlington’s local non-profit organizations.

Mark Moreau, intake and data quality coordinator for Bridges to Independence, says local affordable housing groups have felt the impact of increasing rents and housing loss. Bridges to Independence is a transitional program that helps Arlingtonians and Alexandrians facing homelessness find housing. In the past year, Moreau says the organization has seen an increasing number of large families in need of housing assistance.

“It isn’t getting easier,” said Moreau. “It’s very difficult to house large families, like a family of nine or the family of eight. We’ve partnered with [other organizations] for that, combining two two-bedroom units into one four-bedroom unit.”

“There is a push to get people out of the shelters quicker and not keep people in transitional housing,” says Moreau. “If you put people in housing too quickly without support, it sets them up to fail. But HUD and others have argued that it is the model they’re pursuing. We’ve adjusted to that, but a lot of the staff are not thrilled about it. We would like to keep people in the shelter longer to help them work through issues.”

Where Bridges to Independence used to keep families for up to two years, and generally at least six months, the push has been to get that number down to four months. But Moreau says there’s other issues homeless citizens are also facing that can’t be fixed in four months. Moreau says some need mental health support, while others have little to no source of income. If they have criminal records, Moreau says that can make finding employment difficult. The non-profit also helps those who might have a murky immigration status, which also makes finding employment and housing a challenge.

“Some of our folks have a hard time getting approved for an apartment because they have bad credit or even no credit,” said Moreau. “It [was] initially shocking to me; people with no credit getting turned down. We’re seeing more young people in transition age youth, 18-24. Some are adult children with parents. We had a 20-year-old that was pregnant with first child. It’s harder [to find housing] with no rental history. That affects their chances of qualifying.”

Rent in Arlington continued to climb in 2015.

But at the county level, there is positive work being done. Janopaul said she was particularly happy to see the Arlington County Board adopt an Affordable Housing Master Plan in 2015, which lays out long-range strategies for securing additional affordable housing.

“It was an affirmation of this community’s commitment to be inclusive and diverse, “said Janopaul. “We’re a nerdy community and we responded well to data analysis, and that was part of that plan. It was pretty joyous when hundreds of people turned out on the day it was approved and really committed this community to affordable housing. That was a big highlight of the year.”