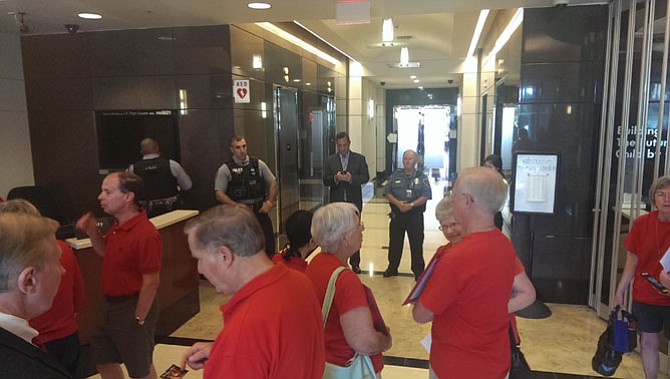 Security initially formed a line between demonstrators and the hallway to the Fairfax County School Board work session on July 21, but eventually they were allowed through. Photo by Tim Peterson.

The Fairfax County School Board was scheduled to discuss new regulations for addressing daily life at school for students who identify as transgender or gender-nonconforming at July 21 work session held at the school system’s Gatehouse Road headquarters in Falls Church.

The week of the session, however, newly elected School Board Chair Sandy Evans announced in an FCPS release that implementation of the regulations would be put on hold while a court case elsewhere in Virginia involving a transgender student’s bathroom usage is decided.

The topic was therefore removed from the July 21 work session agenda.

The regulations are an implementation strategy for the words “gender identity” being added to the school system’s non-discrimination policy in May 2015.

Regardless, a group of demonstrators, clad in red mostly, showed up at the Gatehouse facility around 5 p.m. to voice their opinion against the regulations. Some stood along Gatehouse Road flashing signs that called the regulations unlawful, or threatening to non-transgender students.

Inside the building’s lobby and cafeteria, other demonstrators in red appeared at first to be penned in by a row of security detail. But eventually they were let through to the meeting.

Robert Rigby, a West Potomac High School Latin teacher and leader of the employees’ LGBTQ organization FCPS Pride, was present in support of the regulations.

FCPS spokesperson John Torre said the work session was open to the public, as all work sessions are.

The School Board meets again July 28 for its regular business meeting. The transgender regulations were not on the agenda as action items or new business as of going to print.